Despite the media focus on the Fight for 15 minimum wage protests around the country on April 15, it seemed to me to be a good media day for war tax resistance too. New resisters announced their commitment, while long-time resisters continued to speak up in opposition to military spending, in support of redirecting tax dollars, and in support of peace with justice. In addition, resisters and their supporters around the country redirected tax dollars, held signs along major roadways, and passed out literature about military spending and war tax resistance. We have heard of over $40,000 in redirections, but I am sure there’s a lot more that we haven’t heard about (getting war tax resisters to report their redirections […]

by Sam Koplinka-Loehr, Philadelphia, PA Since I was born in 1991, the U.S. Government has been in a non-stop state of war, and has spent trillions of dollars on killing people overseas. As a young person growing up in the United States, I saw our schools faltering. I saw income inequality growing. I saw communities struggling. And yet, the government was spending more money on the military. The United States spends more money on the military every year than the next 15 countries combined. The 2016 budget proposal includes $782 billion for current military spending and an additional $518 billion for covering past military costs, such as war debt. In order to pay for these expenditures, 45 percent of all […]

For math lovers, 3-14-15 holds special significance. It’s the annual Pi Day, but not just any Pi Day: “In the year 2015, Pi Day will have special significance on 3/14/15 at 9:26:53 a.m. and p.m., with the date and time representing the first 10 digits of π. That same second will also contain a precise instant corresponding to all of the digits of π.” (Wikipedia) We peace activists have our own significant — in this case — “pie.” That’s the pie chart that shows how the federal government spends U.S. income tax dollars and the shocking priority on war represented by the pie. War Resisters League began producing a pie chart in 1977 for the first edition of the Guide […]

War tax resister David Gross recently appeared on the Litopia After Dark podcast (discussing some of his countercultural/culture-jamming activities in addition to tax resistance and his book, 99 Tactics of Successful Tax Resistance Campaigns). Co-host Peter Cox repeatedly stated that being a war tax resister was “elitist.” He even said, “Most people can’t do [war tax resistance], so it is almost by definition quite elitist.” This is a truly mindboggling definition if I’ve ever heard one! But I wanted to break that down a little. Choosing to take action based on your conscience, in my experience, often means to other folks that you think that by virtue of taking that action that you are better than them. This leads to […]

One brief discussion I had at our November conference was about what we ought to do to reduce or eliminate military spending. One person argued that we should set some sort of goal for what we wanted military spending to be reduced to, as a starting point for discussion. For example, campaigning to reduce military spending to $400 billion, or some percentage of the federal budget. I recognize the utility of this move, especially for talking to people who are not even all the way there yet with us on opposing war. Getting people to agree that the military budget is too large is one possible first step. Even the WRL pie chart is aimed at getting people to come […]

Our friends at Strike Debt (who released the Debt Resisters Operations Manual that has a whole chapter on tax resistance) are promoting a new effort called Debt Collective, coming off of their recent Rolling Jubilee forgiveness of $4 million in student loan debt from Corinthian Colleges. Debt Collective is a way for debtors to organize together, and it is not limited to student debt, but also includes credit cards, mortgages, and other types of debt: The goal of the Debt Collective is to create a platform by debtors and for debtors for organization, advocacy, and resistance. Organizing collectively offers many possibilities for building power against creditors: As we build membership, we can organize debtors into groups based on region, type […] 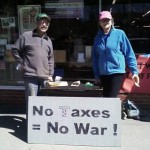 Yesterday on Facebook, friend and fellow activist Sam Diener shared an article out of Afghanistan with me, “Afghan Taliban Reportedly Kill 20 Civilians Over ‘War Tax’.” The short article sourced from Radio Free Europe Radio Liberty/Radio Free Afghanistan reported: An Afghan official said Taliban militants have killed 20 civilians who refused to pay them “war tax” in northern Kunduz Province. Kunduz police spokesman Sayed Sarwar Hussaini said on August 11 that the Taliban also shot and wounded 10 others over their refusal to pay the militant group. I am immediately reminded of what minimal risks I face (and most of us in the U.S.) with my own war tax resistance. I hope I would be strong enough to say no […]

In March we conducted our first ever Google Hangout, called “War Tax Resistance for a Better World”, with three panelists talking about how and why they do war tax resistance and how their actions contribute to creating the world they want to live in. Now we have a complete podcast version for your listening pleasure, to start off our occasional podcast series, also called War Tax Talk. Listen to the podcast. Subscribe to the podcast feed by adding http://feeds.feedburner.com/WarTaxTalkPodcast to your RSS reader. We hope to get onto iTunes and/or other podcast syndication sites soon. Send suggestions for podcast/Google Hangout topics or promotion ideas to wartaxresister at nwtrcc dot org. Listen to other audio interviews with war tax resisters.  Post […]