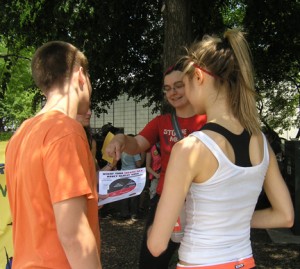 Activists have been tireless in their efforts against war – petitioning, leafleting, marching in demonstrations, writing analyses of current events, lobbying, getting arrested in civil disobedience actions, risking the displeasure of friends, neighbors, co-workers, and family because of their views.

Yet some are reluctant to sever the one direct connection that most people have to war – their tax payments to the federal government. Why?

This page collects some of the concerns people frequently express when they begin to consider refusing to pay war taxes. On a basic level, these concerns boil down to questions like these: is war tax resistance safe? is it ethical? does it work?

Here are some answers, but first:

It’s hard to take on something new with a lot of uncertainties. Life is already complex enough.
We all have more than enough things to do and must choose our battles. However, if you are subject to federal taxes you are being forced to participate in the government’s battles — you’re just being drafted from the comfort of your home rather than being shipped overseas. War tax resisters feel compelled to stop supporting the U.S. war machine. We feel that whatever personal inconveniences may result are minor compared to those of people suffering because of U.S. military actions.
It would create problems with my spouse/parents/employer (security clearance, financial trouble, stress).
You don’t know until you try. War tax resisters find support in surprising places. Relatives and friends often admire the act even if they are unwilling to participate in a similar way, and there are steps you can take to lessen the financial stress. Worrying about what others think, though important, could paralyze progress.
I’ll go to jail.
It’s unlikely to happen… at least not for refusing to pay war taxes. Of the couple dozen war tax resisters jailed in the last 60 years – out of tens of thousands of resisters – the reason has not been for refusal to pay taxes, but rather because they persistently refused to give information to the IRS (or they “falsified” tax forms). Three war tax refusers sentenced to prison in 2005 attracted IRS attention at their small business for not withholding the taxes of other resisters. Another under-reported income one year and the IRS caught up with him; he spent 5 months in jail. The government must take many steps before they begin court actions that might end with the possibility of jail; you as the resister have many choices along the way to reduce or eliminate the risk.

With interest and penalties, they’ll end up collecting more.
If the IRS collects, it probably will add penalties and interest at the prevailing rate. However, the penalties and interest usually do not offset the IRS’s costs of collection. Some war tax resisters just accept this as one of the burdens of war tax resistance; others set their resisted taxes aside so that they can draw on it for their own expenses in case the IRS succeeds in seizing money from them. Within the war tax resistance network there are some sharing funds to help reimburse resisters for money seized as interest and penalties.
The IRS might take my house or car.
The IRS can seize property from people with tax debts. This, however, is very rare for war tax resisters: from 1992 to 2020, the IRS seized one house and two cars from war tax resisters, both in the 1990s. As a resister, you will be given opportunities to pay up and stop the seizure, or redeem the property from the buyer after it is sold. There are many ways to protect your property. For example, some have put their property in the name of close friends or relatives. Also, if your resisted taxes are in an alternative fund, you could retrieve that money to help pay for the recovery of your property. See this list of property seizures against war tax resisters.

The yearly number of property seizures made by the IRS dropped dramatically after 1997.

It’ll call attention to me, and the IRS may invalidate my deductions and credits.
War tax resisters are rarely audited, because the IRS usually chooses to send resisters’ returns directly to the collection division. However, many war tax resisters welcome the attention of the government so officials know why the resisters are refusing to pay their taxes.
I might lose my job.
It’s unlikely that an employer will fire an employee who gets an IRS salary levy. In fact the U.S. Code (15 U.S. Code § 1674)  and Title II of the Consumer Credit Protection Act state: “No employer may discharge any employee by reason of the fact that his earnings have been subjected to garnishment for any one indebtedness.” Note the “one indebtedness”; there seems to be no protection if a second garnishment comes along. Some resisters have quit their jobs rather than allow the IRS to successfully seize the war taxes from them.
I need my 401K/pension/IRA/Social Security to live on when I am older.
Currently, the IRS can automatically seize 15% of Social Security checks. They can seize 401K, pensions, or IRAs, but hesitate to do so except as a last resort. Many war tax resisters put their resisted taxes into escrow accounts or alternative funds with the provision of getting that money returned if the IRS succeeds in collecting from another source. Read more in our booklet on health care and income security.
It’ll hurt my credit rating.
Despite IRS liens and levies, war tax resisters have been able to get credit cards, loans, as well as make purchases on credit. Perhaps more problematic today is in the hiring process: sometimes credit checks are used to rate job applicants. So far 10 states have legislation with restrictions on employers using credit information in the hiring process, and we hope that other states will pass such restrictions also.
It might jeopardize my ability to get student financial aid or loans.
Financial aid officials want proof of your income level. Give the best information you can. Having tax forms makes it easier, but low income non-filers have received aid. Be sure to search all sources of funding outside the federal (FAFSA) system. See our financial aid fact sheet and in the Debt Resisters’ Operations Manual.

This isn’t my battle. Rather than spend the time and energy to fight with the IRS, I prefer to do constructive work for change elsewhere.
As mentioned earlier, it is up to each of us individually to decide where we will focus our efforts and which projects will get our attention. Resistance to injustice is constructive, particularly when that resistance is coupled with rerouting of taxes into community (and other) programs. War tax resisters do not claim that tax resistance is the best or only way to protest militarism, but fear should not limit our choices.
If everyone were to pick and choose which taxes to pay, that would be unfair.
If people are willing to nonviolently resist taxes for whatever cause and deal with the consequences, that’s their decision. War tax resisters are not shirking their civic duty by refusing to pay the IRS. Most reroute their taxes into programs hurt by the military spending and misplaced priorities of the U.S. government.
I would rather work within the system. War tax resistance is alienating and marginal and will cut me off from the circles of influence that affect real change.
In trying to make fundamental changes, it is sometimes necessary to do things that others feel is alienating or extreme in order to get the attention of an establishment that chooses to ignore injustice. In a movement for social change, there are many complementary roles to play. Among them is the role of agitator, which aids in getting attention and raising issues. As Martin Luther King, Jr., once noted, “Nonviolent direct action seeks to create such a crisis and foster such a tension that a community which has constantly refused to negotiate is forced to confront the issue. It seeks so to dramatize the issue that it can no longer be ignored.”
Taxes are good; we shouldn’t refuse to pay them. I support some of the things taxes pay for, like education and human services.
While many taxes may be neutral, those that contribute to killing are certainly not, and that’s half of the federal discretionary budget! Nevertheless, most war tax resisters don’t merely refuse taxes, thus putting the burden of society’s expenses on the shoulders of others. Rather than keep resisted taxes, they reroute those taxes to society’s programs most in need of attention. Many war tax resisters do choose to pay state and local taxes.
It’s wrong to break the (tax) law.
Openly withdrawing consent is essential in order to resist oppression and tyranny. Nonviolently breaking laws has had a long and honorable tradition in the U.S. If Thoreau hadn’t refused to pay his taxes as a protest to slavery and the Mexican-American War, he would never have written his essay Civil Disobedience. If protesters for women’s suffrage, labor, civil rights, Vietnam War, and gay rights, among other movements, hadn’t committed civil disobedience, those movements might well have had very different results.

War tax resistance is too complicated.
It can be complicated, depending on how you resist the taxes and what your personal situation is. But it can also be as simple as doing what you do now, except to refuse a token amount of money and include a letter of explanation with your return. In any case, there are counselors who are willing to help you figure out how to easily fit war tax resistance into your life as an activist.
I would have to change my lifestyle.
Some war tax resisters go out of their way to be uncollectible and consequently change their lifestyle, for example by adopting voluntary simplicity. As mentioned earlier, however, many war tax resisters find they can fit this resistance into their current lifestyle.
I never owe anything. The IRS always sends me money.
Chances are you are having too much money withheld from each of your paychecks. You can correct this by claiming additional deductions on the W-4 form that you file with your employer. This will mean that less income tax will be withheld. That way, you may owe money to the IRS at the end of the year, which means you can refuse payment.