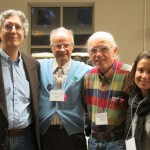 As we’ve mentioned before, we got a recording of Peter Goldberger’s talk on the Hobby Lobby decision from our November 2014 meeting. Now we also have a transcript, which I found absolutely necessary for following the course of Peter’s argument. It’s not an overly complex argument, but seeing it in writing helped me a lot. Here’s a one-paragraph refresher on the case, in case you need it: Both Hobby Lobby and Conestoga Wood Products (whose cases were joined for the appeal to the Supreme Court) argued successfully that, like non-profits, religious employers, and some other exempted employers, they should be able to get an exemption from providing birth control coverage under the Affordable Care Act. Specifically, they argued that the […]

Today marks the 70th anniversary of the US military’s nuclear bombing of Hiroshima, which killed as many as 150,000 people. On August 9, we recognize the 70th anniversary of the bombing of Nagasaki, which killed as many as 70,000 people. Nuclear bombs were funded by US war taxes, coming from US taxpayers, and dropped by US military forces. Nuclear weapons are made to be more destructive than any other weapon, even though they are rarely used. (Depleted uranium being a notable exception.) Nuclear weapons really keep the war economy going since their very presence requires a constant readiness for war, not to mention maintenance and supervision. Over the next ten years, the US is estimated to spend about $348 billion […]

Despite the media focus on the Fight for 15 minimum wage protests around the country on April 15, it seemed to me to be a good media day for war tax resistance too. New resisters announced their commitment, while long-time resisters continued to speak up in opposition to military spending, in support of redirecting tax dollars, and in support of peace with justice. In addition, resisters and their supporters around the country redirected tax dollars, held signs along major roadways, and passed out literature about military spending and war tax resistance. We have heard of over $40,000 in redirections, but I am sure there’s a lot more that we haven’t heard about (getting war tax resisters to report their redirections […]

by Sam Koplinka-Loehr, Philadelphia, PA Since I was born in 1991, the U.S. Government has been in a non-stop state of war, and has spent trillions of dollars on killing people overseas. As a young person growing up in the United States, I saw our schools faltering. I saw income inequality growing. I saw communities struggling. And yet, the government was spending more money on the military. The United States spends more money on the military every year than the next 15 countries combined. The 2016 budget proposal includes $782 billion for current military spending and an additional $518 billion for covering past military costs, such as war debt. In order to pay for these expenditures, 45 percent of all […]

For math lovers, 3-14-15 holds special significance. It’s the annual Pi Day, but not just any Pi Day: “In the year 2015, Pi Day will have special significance on 3/14/15 at 9:26:53 a.m. and p.m., with the date and time representing the first 10 digits of π. That same second will also contain a precise instant corresponding to all of the digits of π.” (Wikipedia) We peace activists have our own significant — in this case — “pie.” That’s the pie chart that shows how the federal government spends U.S. income tax dollars and the shocking priority on war represented by the pie. War Resisters League began producing a pie chart in 1977 for the first edition of the Guide […]

War tax resister David Gross recently appeared on the Litopia After Dark podcast (discussing some of his countercultural/culture-jamming activities in addition to tax resistance and his book, 99 Tactics of Successful Tax Resistance Campaigns). Co-host Peter Cox repeatedly stated that being a war tax resister was “elitist.” He even said, “Most people can’t do [war tax resistance], so it is almost by definition quite elitist.” This is a truly mindboggling definition if I’ve ever heard one! But I wanted to break that down a little. Choosing to take action based on your conscience, in my experience, often means to other folks that you think that by virtue of taking that action that you are better than them. This leads to […]

One brief discussion I had at our November conference was about what we ought to do to reduce or eliminate military spending. One person argued that we should set some sort of goal for what we wanted military spending to be reduced to, as a starting point for discussion. For example, campaigning to reduce military spending to $400 billion, or some percentage of the federal budget. I recognize the utility of this move, especially for talking to people who are not even all the way there yet with us on opposing war. Getting people to agree that the military budget is too large is one possible first step. Even the WRL pie chart is aimed at getting people to come […]

Our friends at Strike Debt (who released the Debt Resisters Operations Manual that has a whole chapter on tax resistance) are promoting a new effort called Debt Collective, coming off of their recent Rolling Jubilee forgiveness of $4 million in student loan debt from Corinthian Colleges. Debt Collective is a way for debtors to organize together, and it is not limited to student debt, but also includes credit cards, mortgages, and other types of debt: The goal of the Debt Collective is to create a platform by debtors and for debtors for organization, advocacy, and resistance. Organizing collectively offers many possibilities for building power against creditors: As we build membership, we can organize debtors into groups based on region, type […]