[Editor’s Note: The following are excerpts from a letter that Howard Waitzkin and Mi Ra Lee wrote the IRS and included with their 2017 tax return. Thank you for sharing!]

Statement of Resistance from Howard Waitzkin to the IRS for Tax Year 2017:

I am a Conscientious Objector (CO) to war, based on religious and ethical beliefs, as recognized and certified 36 years ago by the U.S. Selective Service System. My beliefs as a CO have prevented me from participating in military service. However, I have devoted my whole professional career to many forms of alternative service, trying to meet the unmet health and mental health needs of active duty military personnel and veterans, as well as those of other underserved communities in the United States and other countries. For instance, since 2005 I have directed a national network of volunteers, including health and mental health professionals and other people such as veterans and active duty military personnel, the Civilian Medical Resources Network. In this effort, we have provided free services to hundreds of active duty military personnel who have not been able to meet their needs for services within the military. Many of these clients have experienced severe problems due to their military service, including PTSD, severe depression, military sexual trauma, and substance abuse; about one half of the clients have been suicidal at the time of intake.

Due to my values as a CO, which derive from religious and ethical beliefs, I continue to experience profound ethical conflicts about paying for war through my taxes. For many years during and after the Vietnam War, I resisted half of my income taxes, leading to encounters with IRS officials who entered into dialogue with me. I contributed the money that I didn’t pay for war taxes to humanitarian projects, including various efforts to help active duty GIs and veterans. I argued and continue to argue that I and others like me who are conscientiously opposed to war should not suffer from the Constitutional contradiction of being recognized officially as a CO yet being required to pay taxes for war. Later, when the proportion of the U.S. federal budget devoted to war decreased somewhat, I decided not to resist a portion of my income taxes officially but continued to spend a substantial part of my earnings on humanitarian projects including services to current and former military personnel.

Now, our wars in various parts of the world have increased, the impacts of our military actions have created enormous devastation, including terrible effects on population health, horrible epidemics of suicide and deaths from drug abuse, adverse changes in the environment such as pollution and a substantial worsening of global warming, a rapid increase in gun violence in the United States and other countries, and a diversion of critically needed economic resources away from services like health, education, and improved infrastructure and into terribly destructive militarism. “Endless war” has become our way of life, although warfare directly affects mainly the most marginalized and disadvantaged groups in our society who see no other way to get a job or an education except through enlisting for military service. Meanwhile, despite its enormous costs, both financial and humanitarian, endless war leads to little or no apparent benefits, except large profits for a tiny portion of the world’s population. These ethically and religiously based considerations have led me to decide once again to withhold my financial support for war.

Statement of Resistance from Mi Ra Lee to the IRS for Tax Year 2017: 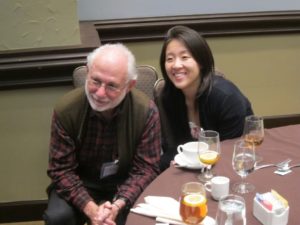 I grew up in Korea, where war has had terrible effects on living beings for centuries. My family suffered directly from the Korean War and the dictatorships that followed that War, leading to deaths and injuries among many family members and dear friends. Our society also continues to suffer from prior wars, when we were conquered by Japan, China, North Korea, and other war-making countries. As one of many examples, the women whom the Japanese military personnel used as “comfort women” have experienced deep trauma and degradation, which still has not been adequately compensated. Similar abuses affecting women have been perpetrated by military personnel from the United States and other countries that participated in the Korean War and that have maintained the military occupation of Korea. Until very recently, conscientious objection was not tolerated and the entire male population required to serve in the military; for that reason, many COs have been required to spend long periods of their lives in prisons. If military conscription had applied to women, I am sure that I would have been a CO and probably also would have gone to prison.

Since I have been living in the United States, I have been shocked by the negative impacts of warfare on the U.S. population, as well as the many populations around the world who have been adversely affected by U.S. military policies and practices. On a daily basis, we must live in fear within the United States, as veterans and others influenced by its military culture engage in almost daily tragedies involving gun violence. The tragedies of warfare, paid for through our taxes, are ruining us and the rest of the world’s peoples. For all these reasons and others, I also can no longer ethically pay half of my income taxes for war.