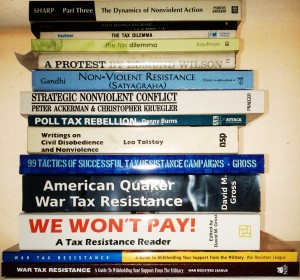 These books are worthy additions to the library of anyone contemplating war tax resistance or nonviolent struggle in general.

The publisher price is listed, usually for the paperback version. Most are also available as e-books. Check around and buy at your preferred bookstore or outlet. Available from NWTRCC where noted.

War No More: Three Centuries of American Antiwar and Peace Writing (review)
By Lawrence Rosenwald, published by Library of America

American Gandhi: A.J. Muste and the History of Radicalism in the Twentieth Century (review)
By Leilah Danielson
Penn Press (2014), 472 pp., $55

The Many Sides of Peace: Christian Nonviolence, the Contemplative Life, and Sustainable Living
By Brayton Shanley
Wipf & Stock Publishers (2103), 192 pp., $18

What Belongs to Caesar? A Discussion on the Christian’s Response to Payment of War Taxes
By Donald Kaufman
Wipf and Stock (2006), $14

Feeling Light Within, I Walk: Tales, Adventures and Reflections of a Quaker Activist
By Peg Morton
Cedar Row Press (2013), 351 pp., $15

Building the Beloved Community: Maurice McCrackin’s Life for Peace and Civil Rights
By Robert Coughlin and Judith Blackburn Bechtel
Temple University Press (1992) now out of print but available to download as PDFs by chapter at http://www.nku.edu/~bechtel/mccrackin.htm

American Gandhi: A.J. Muste and the History of Radicalism in the Twentieth Century
By Leilah Danielson
Penn Press (2014), 472 pp., $55

“Few Americans recognize A.J. Muste’s name today, though his influence can be found in both the dominant culture and its radical and pacifist margins,” says Leilah Danielson in this wonderful biography of A.J. Muste. Indeed, I was one of those activists who had heard Muste’s name but never really knew anything about him. So it was with grateful amazement that I read chapter after chapter about this talented, deeply inspiring man. We all should know this history.

Muste spent his long life “as a leader of social movements and as an important political, intellectual, and moral presence in American society from World War I to the mid-1960s,” writes Danielson.  She argues that Muste was a prophet. “He drew upon his Christian faith and the example of the Hebrew prophetic tradition to call the American people to righteousness, to repent of their sins and build a new world where ‘every man would sit under his own vine and fig tree, and none should make them afraid.’

“…At the same time that Muste represents significant historical formations,” the author continues, “he was unique. He occupied an anomalous place in the history of American radicalism; he was a Social Gospel minister yet he was a working-class immigrant; he was an intellectual and idealist yet he was beloved by the practical and down-to-earth workers who rallied to his vision of militant industrial unionism in the 1920s and 1930s; he was an anti-Stalinist yet he refused to condone McCarthyism and opposed the Cold War; he was the foremost theoretician of Gandhian nonviolence in the United States yet he publicly chastised the civil rights leadership for failing to respond to the challenges posed by black power and U.S. empire; he was a devout Christian yet he was held in high esteem by the Marxist, secular left; he was an Old Leftist yet he supported and celebrated the New Left.”

A big point that is made over and over is that Muste was a coalition builder. He was able to win the trust of groups with very different political values and convince them that working together would achieve more than staying apart. He did this in the labor organizing of the twenties and thirties, and he did this again protesting the Vietnam War.

Throughout the book, parallels to organizational struggles today were striking. For example, by the end of a pacifist conference in 1947, it had become clear that participants were fundamentally divided on the question of tactics. Radical pacifists advocated resistance, while liberal pacifists remained committed to working within the system and making alliances with nonpacifists. (Sound familiar?) The radical pacifists drafted a manifesto that spelled out how they believed pacifists should respond to the nuclear arms race and the emerging Cold War. “Pacifists had to assume personal responsibility for these evils through draft resistance, refusal to pay war taxes, refusal to attend segregated institutions, and reducing their standard of living,” writes the author. This led to another conference in 1948, on “more disciplined and revolutionary activity” which gave birth to the Peacemakers, a group committed to “taking personal responsibility” for the contemporary crisis by cutting themselves off as much as possible from the war-making state. The Peacemakers believed that relying on “spiritual rather than material power was a revolutionary act in the context of a society that had become overly dependent on science, rationality, and the state.” They also believed in the redemptive power of self-suffering, and embraced an image of themselves as modern-day prophets whose acts of civil disobedience would awaken Americans to their responsibility for the atomic and international crisis. Many of the elders in our WTR movement, such as Juanita and Wally Nelson, and others, were Peacemakers. For almost 20 years, the Peacemakers were virtually the only consistent source of information and support for war tax resisters.

Muste became a war tax resister in 1948.  The IRS pursued him in the early 50s.  In 1960–61 he went to tax court to argue his case. The tax court ruled that his resistance was not fraud, but that he had to pay. He did not pay, nor did he file a return for the rest of his life.

It’s impossible to summarize this 340 page dense history book. So I will pick just one era covered: the Vietnam War. I did not know that Muste was at the head of organizing most of the major important mobilizations/rallies to end the war. He was instrumental in building an effective and diverse coalition against the war. As the war waged on, and being the radical that he was, Muste called for more dramatic actions such as civil disobedience, draft resistance, and of course war tax resistance. In 1966, he organized a small group of fellow pacifists who went to Saigon and Hanoi. While planned as a protest against the war, Muste also felt a deep underlying need to connect with the North Vietnamese people, to express his shame and outrage at the conduct of the United States toward their country. (Those in the group included Bradford Lyttle and Karl Meyer, two war tax resisters who are still active in WTR.) In Saigon, among other things, they met with the well-respected Buddhist monk Thich Nhat Hanh, and in Hanoi with president Ho Chi Minh, with whom he was very impressed.

My thanks go out to Danielson for undertaking the monumental task of writing this book. She read through countless pamphlets, fliers, correspondence, minutes of meetings, and other history books, to compile the month by month and year by year history of Muste’s life. She would also have had to research how his activities interfaced with other political groups throughout the 20th century — pacifist, non-pacifist, radical Christians, labor, communists. But how fascinating! I am grateful for knowing about this remarkable man who contributed so much.

David Hartsough’s Waging Peace: The Global Adventures of a Lifelong Activist delivers the best of what the title promises, with emphasis on the Waging and the Adventures.  Beginning with a racist’s shaking knife at his own shaking chest during a lunch counter sit-in, Hartsough takes us from the bullies and rocky snowballs of one influential walk home from school in his childhood Iowa – “My first encounter with the power of nonviolence came early”  –  through his decades of energized, sustained, nonviolent direct action on frontlines all around the world, eyes always  on the prize, or else searching for it through teargas.

David Hartsough is a Quaker and a War Tax Resister who has for decades been redirecting a large portion of his “tax obligations,” believing that if war is abolished, “humanity can not only survive and better address the climate crisis and other dangers, but will be able to create a better life for everyone. The reallocation of resources away from war promises a world whose advantages are beyond easy imagination.” He cofounded the Nonviolent Peaceforce, inspired in part by Gandhi’s idea of a shanti sena, a peace army, and this organization is now active in 40 countries, stationing trained professional peaceworkers in conflict areas around the globe and is sustained by an $8 million budget. He works with World Beyond War and is currently executive director of Peaceworkers in San Francisco. Waging Peace has been in the works for 27 years.

Hartsough’s nonviolent tactics range from conducting nonviolence trainings to acting as a human shield in Central America, Kosovo, and the Philippines.  He is always conscious of the power of human relationship, aware that more intentional and rewarding connections are not only conceivable, but also attainable and worth strategizing and striving for. As he writes in a chapter called “Blockade: Standing in the Way of Bombs Headed for Nam”: “Soldiers in the military develop a sense of comradeship that is necessary for survival in war… I find great hope in believing that if we are willing to apply the same kind of discipline and determination to do risky and sustained nonviolent actions for peace as soldiers do in fighting wars, we might see remarkable transformation in our society and world.”

Our collaborations as human beings provide, in words Bishop Ken Untener wrote in honor of Archbishop Oscar Romero, “an opportunity for the Lord’s grace to enter and do the rest.”  But there is no pie in the sky over Hartsough’s head, no Sugarcandy Mountain on the horizon. He sees what needs to be done clearly and without distraction. For example, sometimes it boils down to “the protective power of a peaceful presence” – risking death, severed legs, broken bones, cigarette burns, condiments and phlegm to the face, verbal abuse, indifference, etc.  Other times, one must summon the future, announce that choices may be made, pose the right questions. Hartsough seems comfortable with this aspect of prophetic duty, which always comes across as sincere, respectful, humble, and weighty. Not heavy, but weighty. Something to be contended with:

“Whether or not 2020 is the year the American Empire will collapse [as Norwegian sociologist Johan Galtung predicts] I don’t know. But I believe a transition is inevitable. As Americans, we face a key question: Will we join people around the world to try to make this transition as peaceful as possible, or will we try to hold onto our privileges and our world-dominating way of life?”

“This is my faith – that we can be co-creators with God in helping to build a world of peace, justice, and human dignity for all people. We have all that we need to bring about transformation, and we are all critical to the struggle.”

Hartsough reports that over “half the world’s people live in countries that have had powerful nonviolent movements,” and his book reveals that he has thus far played a significant role in an uncommon number of these, co-creating safety, infrastructure, skill sets, mindsets, history, and heartsets.

Jason Rawn is a graduate of the Jack Kerouac School of Disembodied Poetics at Naropa University and is a member of NWTRCC’s Administrative Committee.