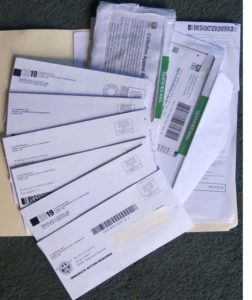 A friend came to dinner recently and brought along her folder of letters demanding payment of her war tax resisted taxes. She’s an activist with a list a mile long about why she’s glad to not be paying for the nefarious activities of the U.S. government. She’s determined to resist, but wanted to make sure the latest mailings did not signal some critical advance in IRS enforcement.

For the first time in her 15 years of resistance, the IRS placed a lien against her property in local county offices last August. Others on the war tax resistance listserve have written about receiving liens in 2019, perhaps signaling some new flurry of “lien-ing” coming out of the IRS. WTR David Gross wrote about his on his Picket Line blog earlier this year. But, don’t freak out! It usually takes some thousands of dollars in debt before liens are issued, and often the worst consequence is the hit on your credit rating. The lien is more problematic if you have property you want to sell.

My partner Ed and I have both had liens issued during our years of resistance, but as we flipped through our friend’s folder a few letters jumped out at us. We had never received notices from the county office at all and no IRS letters with headings like “NOTICE OF WARRANTED LIEN” and “DISTRAINT WARRANT.” She also got one threatening her Social Security benefits, but she has not signed up for Social Security yet.

We found ourselves hung up on “What is a distraint warrant?” I wrote a couple WTR counselors, sending a copy of the letter and was immediately put in my place.

“Scam!” they both replied. These mailings are from those “tax debt relief” companies that “will help you with your tax problem.” In the past those companies sent mailings bearing their company name, but now they seem to disguise their advertising to look as much as possible like official government documents. Looking again at my friend’s letters it was obvious that these self-mailers were not from the county offices or the IRS. For one thing, we are in New York, and 5 of the 6 letters came from Los Angeles, the other from Denver. Even more amusing, every one of the 6 letters had a different 800 number on it.

Liens are public notices in your county of residence; a federal tax lien is the government’s legal claim against your property when you neglect or fail to pay a tax debt. Liens are in place through the 10-year statute of limitations or until the debt is settled, whichever comes first. The IRS can re-issue liens after they expire. Because a lien is a public notice, tax collection schemers or scammers use these public lists to contact debtors and drum up business.

I called the number on one of the letters and had a chat with Mike at American Tax Solutions. He asked about my debt. I told him I refused to pay for war, and he said “I don’t blame you.” He’s based in Los Angeles, so when I asked why the letter came from LA when I’m in New York, he indicated his company buys lists from third parties. He was perfectly willing to help resolve my debt for a $2,000 fee.

I think I will follow up with more about this in a future blog, but meanwhile, toss those scam mailings, and read this article before considering using a debt relief company! And, as to “distraint,” it is an old legal term for “the seizure of someone’s property in order to obtain payment of rent or other money owed,” but may be more in use in England than in the U.S.

One thought on “Lien Times: Resisters, Regulations, and Rackets”