NWTRCC is a coalition of local, regional, and national groups and individuals from across the United States who support war tax resistance. For everyone interested in or actively refusing to pay taxes for war, NWTRCC offers information, referral, support, resources, publicity, campaign sponsorship, and connection to an international network of conscientious objectors to war taxes.

NWTRCC grew out of a National Action Conference in September 1982 called by the War Resisters League and the Center on Law and Pacifism. War tax resistance, which had been highly visible during Vietnam War protests, was growing again with the election of Ronald Reagan and an increasing mood of militarism in the country. A network was needed to share information, coordinate actions, and develop resources for war tax resisters.

Today NWTRCC is supported by more than 45 national and local affiliate organizations along with a nationwide network of individual counselors and activists. NWTRCC has a small office and paid coordinator, and much of the work is done by volunteers. National Coordinating Committee meetings are held twice a year to discuss the needs of the movement, set program goals, determine priorities, and implement and evaluate these decisions. The meetings rotate to different parts of the country, making it possible for more local groups and individuals to be involved in the national war tax resistance network. 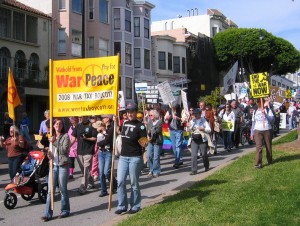 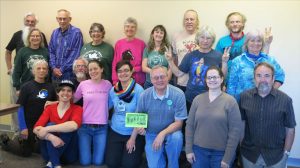 NWTRCC was founded as a coalition of organizations with an active network of individual activists and supporters. Learn how you and/or your organization can get involved or endorse NWTRCC.