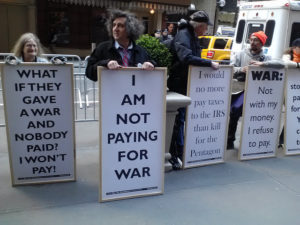 I grew up in a constant shadow of wars—from bomb shelters when I was a child, through Vietnam, the “cold war,” and ceaseless hot ones since then. When I discovered in my 30s that besides what we directly participated in, our government was also fomenting wars all over the world and supplying the arms for them, sometimes to both sides, I vowed myself to peace. That meant I would not help war efforts in any way, including paying for them or for weapons, buying products from companies which profited from war, and every other way that came to my attention.

The only way I felt comfortable resisting taxes (other than the phone tax resistance during Vietnam) was to keep my income under the taxable level, and that I did for many, many years.

When I passed age 60, I let my income rise to meet additional needs that come with increasing age. This meant I began owing money to the IRS to would pay them. Each year I wrote the ch 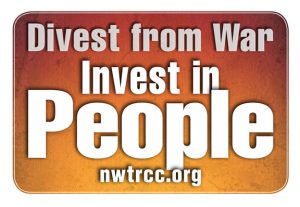 eck I felt worse. Then one year, I knew I absolutely could not pay the military portion of my taxes. The idea of it made me feel physically ill.

This was an ethical choice, a spiritual choice. I am a Quaker and therefore try to live in a way, as founder George Fox said when refusing to be drafted, “that there is no occasion for war.” Add to that our Quaker goal to see “that of God in everyone”—can I aspire to that while killing people? Or pay for others to kill people? Or pay taxes which fund a Department of Defense which sells guns to other countries with which to make war? Impossible.

So I became a war tax refuser. The first year was a revelation. When I read headlines about war or heard

them on the radio, I knew I hadn’t helped that happen through my tax dollars. I felt innocent again, and clean.

Later I joined the steering committee for the War Tax Resisters Penalty Fund, to which provides a vehicle through which people can directly assist war tax resisters whose taxes are collected by the IRS and for whom the collection of penalties and interest is a burden. In providing this mutual support, the Penalty Fund hopes to sustain and expand war tax resistance as a form of conscientious objection to war. [Editor’s Note: A while back, Dave Gross shared his experience of applying to the War Tax Resisters Penalty Fund for a reimbursement of $813 in penalties and interest that the IRS had seized.]

It turns out that it is very rare for war tax resisters to be jailed, lose their homes, or the like. In any case, if things get bad, one can always simply pay up, or let the IRS levy the money owed from a bank account or social security. And if my income is low enough, they won’t be able to do even that.

It boils down to this: nothing they can take is worth more than my integrity. I will no longer voluntarily support murder and corruption. I can’t tell you how much better I feel now. I feel fearless. I feel simple and unconflicted, quiet on the inside.

Anyone who follows the Ten Commandments is also bound to neither murder nor pay for murder. If everyone who preached “thou shalt not kill” would stop participating in war in all ways, including their taxes, including complicity through acceptance of the status quo, wars could never happen again.

You may wonder why, with all this talk of feeling strong and fearless, I have not signed my name to this article. There are two reasons. First, I’m under a heavy load of stress, and have been for years, regarding the care of my extremely elderly mother. I’m not being bothered by the IRS right now and don’t think I could handle that in addition to everything else.

Equally important is that prospective clients look me up online. I try to keep politics out of my healthcare practice so that everyone feels welcome to work with me. I don’t know how finding this blog post would affect prospective clients. There is already something online (unrelated) from 25 years ago that scared someone off recently. So for now, I choose to remain anonymous.

One thought on “Confessions of an Anonymous War Tax Refuser”