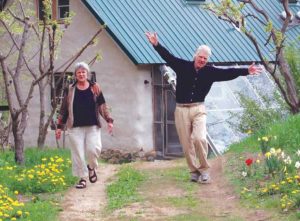 Earlier this year, Suzanne Belote Shanley & Brayton Shanley published a book about the history of the Agape Community, which they cofounded in 1982 in Ware, Massachusetts. The community is dedicated to prayer, voluntary simplicity, and gospel-centered nonviolent witness. War tax resistance has been a core aspect of the community from its founding. The book, Loving Life on the Margins, is not only a history of the community, but also the autobiography of Suzanne & Brayton. They were kind enough to be interviewed by NWTRCC to discuss their lives and the Agape Community.

What was your initial motivation for becoming war tax resisters?

We were becoming an active part of the peace movement of the late 1970’s which was focused on abolition of nuclear weapons. Through the witness of Quakers from the Cambridge Friends Meeting, where we were regular attenders, we became inspired to tax resist. Tax resistance became axiomatic morally and spiritually if we were to consider ourselves disciples of a nonviolent love of life, rooted in the gospel truth of Jesus and an authentic nonviolent way of life. We could not, in conscience, pay for killing of any kind, but primarily the killing in war. We hold the belief that all life is sacred. Meeting Hibakusha, survivors of the American bombing of Hiroshima and Nagasaki, in Boston during the 70’s gave a human face to the ravages of nuclear war and the tax money allocated for MAD, Mutually Assured Destruction, of which we refused to be a part. 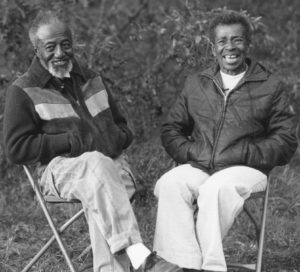 In the book, you mention meeting longtime civil rights activists and war tax resisters Wally & Juanita Nelson. Can you speak about meeting them and the influence they had on you?

Wally and Juanita were leading the tax resistance movement in the Pioneer Valley in Western Massachusetts when we moved Agape to that region. Wally and Juanita were frequent visitors to Agape, Juanita often speaking at our annual gathering, Francis Day, named after St. Francis of Assisi, where she spoke her truth with incisive eloquence and never wavered on any topic dealing with tax refusal. They were both good and loving people, nonviolent mentors to the core. Their commitment to the truth of nonviolence, to the refusal to pay war taxes, and their residence in a tiny cabin called The Bean Patch, without electricity or running water, were motivational in our sustainable, simple life style at Agape. They were unwavering, resilient, authentic leaders by example. They often supported us financially, with their widow’s mite, sending 30 dollars they felt they did not “earn” for giving a talk. We treasure them always.

In what ways does the Agape Community promote and support war tax resistance?

Suzanne and I, as Agape co-founders, have refused all payment of taxes since our inception as a community in 1982 by living on donations which are not taxable. All who come to Agape and who support us in a myriad number of ways, are made aware of our witness. We join with the Pioneer Valley War Tax Resistance group when they have retreats and have, on one occasion, hosted a PVWTR retreat here at Agape.

In the book, you share how a lien was placed on a house that you owned, which the IRS collected on when you sold the house. Having a lien put on your house is a common fear among war tax resisters, what was the experience like for you?

The lien was an unknown for us. I believe we had a $5,000 debt to the IRS. We met with a revenue officer who said that he respected our convictions, but that we had broken the law and we had to pay for this. The officer also said that he was going to file our case under “uncollectible” until such time as we made a taxable income, when the debt would then be enforced. No further fines were to be levied on the initial $5,000.

When we sold our house, the IRS collected our debt of $5,000, plus $1,000 in fines. It was not the cleanest and clearest of refusal stands, and it wasn’t a catastrophic loss, as we did not lose the house itself. The IRS did get our money, but we carried the witness to its conclusion without blood on our hands, so to speak. 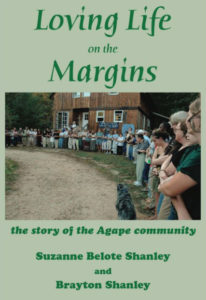 In what ways has war tax resistance positively and negatively affected your life?

As Juanita Nelson said: “Tax refusal will change everything you do and every way you live.” And so, we soon learned that simplicity is a requirement, doing without luxuries, and not having a great amount of discretionary income. This nonconformity, however, and the changes it requires are a blessing and a necessity of this age that we are living in. Our association with tax resisters has meant that we have met and been inspired by some of the most creative and courageous people on earth!

We feel morally and spiritually centered in our decision to refuse paying for taxes for humans to kill humans while destroying the earth’s ability to support life. There are really no negative moral and theological effects; there is sometimes a financial struggle. However, we would say that the major negative may be that we haven’t spread the message of tax refusal as far and wide as this form of witness deserves.

2 thoughts on “Loving Life on the Margins: An Interview with Suzanne Belote Shanley & Brayton Shanley”