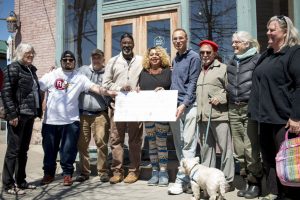 Redirecting war taxes to the Ultimate Reentry Opportunity in Ithaca, New York, in 2017. 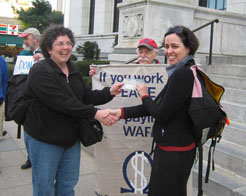 A war tax resister delivers a check at a redirection granting ceremony in Boston.

Many war tax resisters not only refuse to send their tax money to the U.S. government, they also redirect that money to programs in their own communities that are suffering from perverted government priorities, and to nongovernmental regional, national, and international groups seeking to create a better world.

Some pool this money in an escrow account with other resisters – these accounts are called alternative funds. Some alternative funds redirect the interest and/or whole deposits of resisted taxes to community groups

Many resisters also personally redirect their taxes to groups they support. For example:

NWTRCC collects information about redirection each year. While we don’t get a full picture of redirected tax dollars, because not all groups and individuals report their redirections, we think this is an inspiring “tip of the iceberg” look at how this money is being better used.

What Are Alternative Funds? 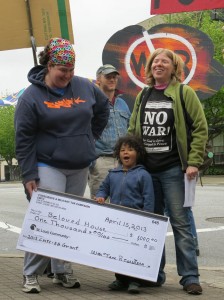 War tax resistance alternative funds began in the late 1960s as a way for resisters to pool the thousands of federal tax dollars resisted because of the Vietnam War.

Alternative funds serve one or more of these purposes:

What if no alternative fund is running near you, or if you have a new idea for a fund? Check out our Guide to Starting an Alternative Fund.

Please contact the funds directly to inquire about their structure, guidelines and policies.

These funds help reimburse resisters when the IRS seizes money to pay interest and penalties for their resisted war taxes. Contributors, who do not have to be resisters themselves, share in reimbursing resisters.