Maggie Martin of the Poor People’s Campaign has rightly stated: “Militarism has spread far beyond the armed forces, to our national borders, police departments, schools, and deep into our culture. The struggle against militarism is both a concrete fight to reclaim the people’s resources and a deeper struggle to reclaim our humanity.” Particularly in the wake of the police killing of George Floyd, the systemic problems of racism inherent in American policing have come to the fore. With the protests against American policing that followed, many people witnessed the militarization of police that has occurred over the past 20+ years. Perhaps the most obvious sign of this has been the use of tanks by many police departments.

“1033 Program,” is named for the section of the National Defense Authorization Act (NDAA) of 1997 that granted permanent authority to the Secretary of Defense to transfer defense “material” to federal and state agencies for use in law enforcement. The program began slowly, but increased significantly after the events of 9/11 were employed as a reason to further militarize the police.

Graphic Created by Watson Institute for International and Public Affairs at Brown University.

The 1033 Program has contributed to police violence and increasingly aggressive police tactics. Military-style equipment has been used for everything from no-knock searches to intimidating protesters. The militarization of police is a facet of structural racism that contributes to the devaluation and loss of Black lives. The Pentagon’s 1033 program has sent billions of dollars of surplus military equipment including tracked and armored vehicles, drones, rifles and rifle sights, grenade launchers, and night-vision goggles, among other items, to law enforcement agencies all over the country.

It is not just military equipment that is being transferred to police departments, but members of the military are given priority in the Vets to Cops program of the COPS Hiring Program. Often, soldiers return from combat bearing the harms of war and then are handed the very weapons of war when joining law enforcement.

Over 20% of local police funding comes from federal grants. Federal funds are the second largest funder of policing after local taxes and fees.

Barry Friedman, director of the Policing Project at NYU Law, is critical of the Justice Department’s law enforcement grants: “They do not insist on compliance with data reporting,” he says, and “DOJ has a strong law enforcement perspective, rather than a community safety perspective.” 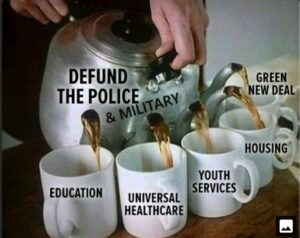 You might decide that it’s a violation of your conscience to pay taxes to a government that spends money on funding the police. You might want to pressure the government through tax resistance on this issue. Or perhaps other motivations apply.

The main methods for resisting federal taxes geared toward funding the police are:

If you are owed a refund at tax time in 2021, the government already has your tax dollars for this year – you won’t be able to resist paying. Consider changing your W-4 withholding so that you give less or no money to the government out of each paycheck. When you owe money at tax time next year, it’s your choice to refuse or not. But if the government owes you money, you don’t have a choice.

If you owe money in 2021, the choice to refuse to pay some or all of it is yours. Keep in mind that resistance is an act of civil disobedience – it has its risks and benefits, and not all of those are 100% predictable!

And you can redirect your resisted taxes to people who are directly affected by and working to end police militarization. Redirection is a powerful way to show what is possible when taxes are used for justice and peace. In the 2017 tax season, many war tax resisters collectively redirected taxes to immigrant communities and organizing efforts led by people of color.

Many resisters resist an percentage of their taxes equal to the percentage of federal income tax dollars that fund war (including police militarization – War Resisters League estimated the total percentage at 47% for the 2021 fiscal year). They might want to pay for other government expenditures, like housing and education, but want to refuse the percentage that goes to war.

If you are unwilling to support the use of federal tax dollars to fund police militarization, NWTRCC can provide knowledge and support.

Police militarization is likely to continue no matter who is President of the United States, so let’s organize for the long haul.