“I do not object to taxation of income, and I would not object to paying my fair share of taxes for positive, life-enhancing government programs, but I will not pay someone to kill in my name or to make weapons whose sole purpose is to threaten life. … We must practice being moral in order to become moral.” – LB

“But even though [my tax refusal is] merely symbolic, it’s something, some very little thing, in an effort to stand with those … in Iraq, and those in the United States, who have gone without health care, decent schools, roads, lived in poverty so that we might spread the American empire across the globe.” MP

“I cannot in conscience pay for war and killing, weapons and bombs, destruction of families and communities–these our federal taxes perpetuate. I have tried by the work I choose and the life style I have chosen, to, in a small way, create another reality in which violence and threat of violence are unimaginable and unuseful.” JS 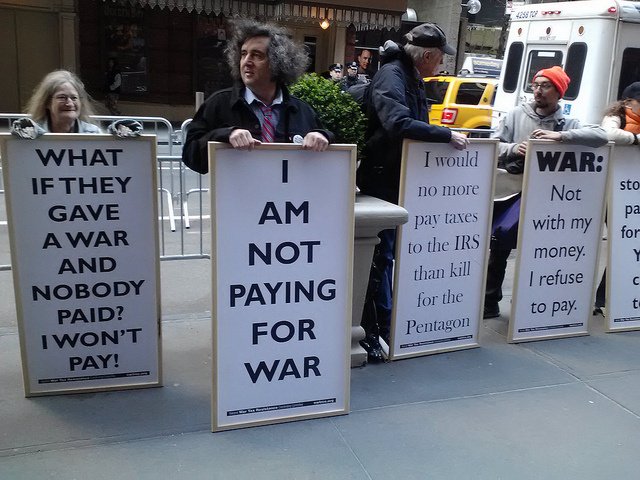 The War Tax Resisters Penalty Fund provides a vehicle through which people can directly assist war tax resisters whose taxes are collected by the IRS and for whom the collection of penalties and interest is a burden. In providing this mutual support, the Penalty Fund hopes to sustain and expand war tax resistance as a form of conscientious objection to war.

History of the Fund

How the Penalty Fund works

To join the list: send your contact information to Peter Smith at webmaster@nwtrcc.org or fill in the registration form.

To contribute to an appeal for funds: write a check to War Tax Resistance Penalty Fund and send it to:
WTRPF c/o Peter Smith
1036 N. Niles Ave
South Bend, IN 46617

Note that donations to WTRPF are not tax deductible.

To pay by credit card, click the following button

Who administers the fund?

Why we do it

If money could buy security, we’d be the most secure country in the world.Read More