NWTRCC promotes tax day actions every year, collecting a list of actions around the U.S. and sending out a press release widely in early April and posting reports on our website and on our Facebook page. Look under our Media link above for “articles” and “podcasts” for recent news items. 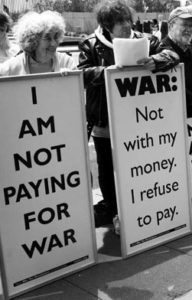 Or take a picture of yourself with a sign! Photo by Ed Hedemann.

Post Your Action: Use the form below, or email the details, or send in this form (PDF), and we’ll announce actions, workshops, film showings, etc.,  between now and tax day on our website and in a national press release.

Once again NWTRCC encouraged Collective Redirection to Black, Brown, and Indigenous Resistance as part of our ongoing Divest from War, Invest in People campaign. This effort supports organizers who are directly targeted by state-sponsored violence and are fighting for liberation in our communities. It challenges us to actively build stronger and more connected movements to take on militarism, racism, and occupation in all its

Assuming that folks will not be able to go out in groups to flyer on tax day, we are asking folks to take a picture or video of themselves with their Tax Day signs and to post these images on social media on April 15 and May 17. When posting a picture or graphic, please let folks know they can find out more info about WTR at nwtrcc.org and also write in, “#NoTaxes4War #NWTRCC.” Writing these “hashtags” with your message will mean that anyone can find your post on Facebook or Twitter by searching “#NoTaxes4War” or “#NWTRCC.”

Over $1.5 trillion in military-related spending is slated for fiscal year 2021, and the drums of war are beating loudly across the world. Whether your local group is able to organize an April 15 Tax Day event on the streets or not, NWTRCC is asking war tax resisters to make their presence felt online.

Click on “Melty” for reports and photos from actions around the country around tax day: Invest in People, Divest from the Pentagon! Also, see the Global Days of Action on Military Spending – NWTRCC is a partner with this worldwide effort

Let us know what you are doing — any time of year — and we’ll post your war tax resistance actions and events on our website.