During the hot dog days of August, I am kept busy prepping for the dedicated Week of Actions around the UN Day of International Peace on September 21.  Peace folks in San Diego have been part of the national actions for the past 4 years, including the Peace Resource Center of San Diego and the Franciscan Peace Connection.  Big shout-out to Pace e Bene for dreaming up Campaign Nonviolence Week of Actions as a time of focused, united local actions to spread a culture of nonviolence.  It has grown from 200 to 2600 actions – a sign of the people’s movement. This year, the focus is on real climate action.

I usually enjoy the busy work in anticipation of the Week. I also make time for the commemoration of Hiroshima and Nagasaki (8/6&9/1945) at this time each year – a tragic measure of US extreme violence which still reverberates today. This year, recent mass shootings in California, Texas and Ohio brought me square up again against the US culture of extreme violence. That these took place days before the 74th  anniversary of the US atomic bombing of Hiroshima is not a coincidence. The two connected powerfully as a mental blinding white flash “obliterated” the peaceful, busy harbor while I watched the Commemoration at Shelter Island’s Friendship Bell. 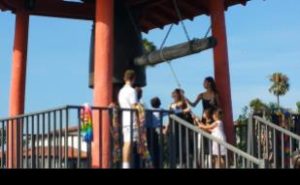 A symbol of open communication and respect between San Diego and Yokohama, the Friendship Bell is completely surrounded by the military installations around San Diego Bay.  State violence is intimately connected to US foreign and internal relations. I am not sure which came first, but since 1492 “our America” has experienced both again and again. That our US military can so casually condemn millions to death, and millions to catastrophic health problems is causal to the casual violence we see too often here. Not surprising, the 24/7 news cycle ignores these connections between mass violence, state violence, and US empire, just as it ignored the 74th observation of Hiroshima and Nagasaki.

In San Diego, we call it Peace Week.

I love Peace Week/Campaign Nonviolence because of the possibilities, the dreaming and visioning that create a peace path forward and deepen our strategies.  I am always energized and sustained by the deeper dialogues and collaborations that bring groups together. The Peace Resource Center calls it Peace Week because of the power of language. We feel the need to be proactive, rather than reactive. To lead instead of respond.

Peace Week is for me an affirmation of what is possible. Now, in this moment of more extreme violence, it is so hard to see how peace can be affirmed. Violence surrounds us daily, in ways we often don’t “see.” It is counted in the stats of officer-involved shootings, domestic violence calls, the back-log of rape kits in the San Diego Police Department, the beatings and shootings in our neighborhoods, in our video games. As Paul Chapell describes, we are fully literate in war and violence. He is calling for a peace literacy that teaches an active engaged peace.

Peace Week 2019 Collaboration looks to repair the trauma our cultural violence creates within each of us, using yoga, restorative circles, and Adverse Childhood Experiences (ACES) approach to bring some healing. The collaboration kicks off with:

Campaign Nonviolence’s Week of Action is a call to active peace, how we each can promote alternatives to violence in our lives and communities. It is a movement to make real the United Nations’ declaration of September 21 as International Peace Day. Until this peace path is accepted by my government, I will keep redirecting my taxes to human needs.

One thought on “Bringing War Tax Resistance to Campaign Nonviolence and UN International Day of Peace!”