I recently spent a full weekend learning about tax preparation. A local organization held a 2 day training to prepare people to learn about tax law in order to assist people in preparing their taxes. The program is oriented towards people on the lower end of the earning scale so that they do not have to pay for tax preparers. The group estimated that they were able to save taxpayers in the area over $2 million in tax preparation fees. 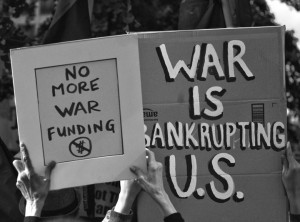 Many of the participants in the training were students at local universities but many were also people who were wanting to obtain knowledge to assist friends and families with their taxes. I appreciated the depth of knowledge that was shared and people who were participating. There were over a hundred participants who will then participate in a test for tax preparation and volunteer at various sites in the area.

Prior to the weekend, most of my “tax preparation” had been from various NWTRCC’s website resources, the practicals, Counselor’s Notes in More Than a Paycheck and quarterly Counselor’s Calls that keep Counselors abreast of changes with War Tax Resisters. I learned from some more experienced resisters that there are others in the NWTRCC network that assist in tax preparation in order to help those with little resources find ways to utilize resources within the tax code not have to pay the federal government more than need be.

Despite promises that the Tax Cuts and Jobs Act of 2017 would bring relief to lower income earners, the lion’s share of those who benefit the most are the extremely wealthy and corporations, many of whom pay no taxes. An article interviewing two economists who wrote a book, Triumph of Injustice, were quoted, “In 2018, for the first time in the last hundred years, the top 400 richest Americans have paid lower tax rates than the working class. This looks like the tax system of a plutocracy.“

There was a lot of attention last year when the new tax law went into effect of the many Fortune 500 companies that do not pay any taxes. The article reports,  “The companies, which include tech giants such as Amazon and Netflix, should have paid a collective $16.4 billion in federal income taxes based on the Tax Cuts and Jobs Act’s 21 percent corporate tax rate…Instead, these corporations received a net tax rebate of $4.3 billion.”

With tax season approaching and louder drum beats for war, many of us find ourselves sharing information about War Tax redirection or refusal. NWTRCC has recently updated Practical 1 to provide current information on W-4 filings as well as an updated single page version of the Peace Tax Return that people can include with their taxes this year stating their objections to paying for war.

As the circumstances in the world change with seemingly increasing war over finite resources and the devastation left in the wake with increasing refugees and climate catastrophe, it seems that adaptability and flexibility would be good things to emphasize. Also about how we frame War Tax Resistance or Redirection that empowers people to shift their time, energy and resources into the world they envision.

Both War and the IRS depend upon our complicity which often seem to be based on fear. It seems that one antidote would be knowledge and knowing that there is a network to support those willing to take risks that move beyond fear.

2 thoughts on “Looking at Taxes for the Masses”