Who doesn’t want to protect workers against uncaring, exploitative, profit-hungry employers? But…. there’s always a but….I’m just waking up to the fact that a wave of state laws intending to protect workers may also slam the door on freelance opportunities. The California law AB5 that just took effect pushes employers to categorize more workers as W-2 employees. Freelancers are scrambling, and articles indicate that many have lost good, paying work.

Now I see a similar law is proposed in New York, where I live. There’s a Freelancers New York campaign against it, and their website announces, “Freelancers in New York watched in horror as AB5 passed hastily in California, destroying the livelihoods of thousands of independent contractors in one vague, sweeping bill.” Maybe that’s a bit of an exaggeration as far as horror goes (there are plenty of horrors these days), but it is worrisome.

As part of our war tax resistance counseling in the NWTRCC network, we have long pointed out that working as an independent contractor (subject to 1099 tax reporting unless off-the-books) gives individuals the freedom to decide whether and how much they are going to pay to the IRS. NWTRCC’s Practical War Tax Resistance #4, Self Employment: An Effective Path for War Tax Refusal is all about this. The key thing is that 1099 workers do not have withholding like W-2 employees, something the IRS has long been lobbying to change. Now it seems the states are going to help with that shift, along with, apparently, knocking a lot of people out of their paying freelance work.

Hopefully other freelancers will weigh in on this topic, especially those in California who may be feeling the effects of the new law. I see in the Freelancers New York FAQs that 33 states already have enacted the “ABC test,” the controversial change in this legislation. Personally I am not totally understanding the nuances in the ABC test compared to the current IRS regulations defined in the Employer’s Tax Guide (click on chapter 2, “Who Are Employees”). It seems one major problem with the ABC test is that it is vague, and employers are scared to hire freelancers because it will be hard to prove their independence if tax or labor enforcers come calling. 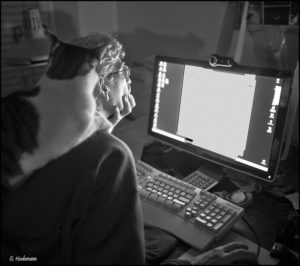 Pets are particularly happy to have work-at-home, freelancing caretakers. Photo by Ed Hedemann.

I think the quandary that I have felt over the past decade or so with the rise of the gig economy is that I’m all for freelancing — it’s great to set your own rate and hours and choose where you work — but watching companies like Uber and Lyft rake in profits off the labor of underpaid, no-benefits workers is another story. Of course, small employers exploit workers in many fields too, whether restaurant work, construction, house cleaning, etc.

In part the quandary comes down to: some of us are quite happy to be choosing our own hours, where we work —and whether we are going to give the feds money for war. We know we are sacrificing some protections like health and unemployment insurance, employer’s share of FICA or workers comp. Others definitely need protection.

I’ll be interested in reader comments on this legislation and whether happy and exploited independent contractors can both be accommodated under these new labor laws.

A few other links:

You’ll find many links to articles and info if you do a search. I was interested in what the National Writers Union and Freelancers Union had to say, and also ran into that “unintended consequences” piece below, which brings up some other good points.

National Writers Union had a September 2019 statement supporting the California bill, but now their Twitter feed has a lot about AB-5 and their hope that the New York law will be better and more specific about exemptions for freelance writers.

The Many Unintended Consequences of AB5, California Globe, 12/10/19. Maybe a more libertarian point of view but brings up some of the tax and benefit issues.

4 thoughts on “A Freelancer’s Quandary”