I arrived in Edinburgh on November 28, 2019, just hours before the opening dinner and discussion at the International Conference on War Tax Resistance and Peace Campaigns. Although I was running on 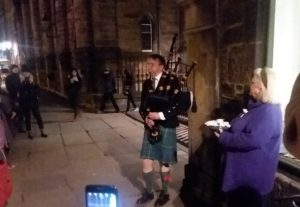 First Night in Scotland. All photos by Erica Leigh.

zero sleep after 14 hours of travel, I managed to pull through and meet the group at the Quaker Meeting! We were treated to an excellent bagpipe performance, dinner, and a social evening.

About twenty people attended the first night, including the staff of our hosts, Conscience: Taxes for Peace Not War (Fay Solichou, Jonathan Maunders, and Karen Robinson), and most of the attendees from around the UK, Germany, and Switzerland.

Vijay Mehta, author of How Not to Go to War, was the featured speaker on the first evening, advocating for the creation of departments or ministries for peace within national governments. I’m afraid I don’t remember much about his talk though—I went back to my hostel to sleep soon afterward.

Aside from the Thursday evening session with higher attendance (around 20), the weekend consisted of about 15 people. A few were from Edinburgh, a few from Germany and Switzerland, a few UKers from other organizations or those who were board members of Conscience. I was surprised to find that I was the only US representative and the only person without existing connections to Europe-based organizations. Folks from several other countries who had originally registered were not able to attend.

As many readers no doubt know, war tax resistance is difficult to accomplish in countries that automatically withhold taxes from all employees’ pay, rather than an amount that can be determined by the worker. UK resisters are largely self-employed or low-income. Some campaigners from other countries discussed paying under protest.

Here are some examples of the ways in which attendees of the conference have been refusing taxes for war:

A lot happened over the weekend, so I’ll focus on some of the highlights, people, and information that I think you all might be most interested in. 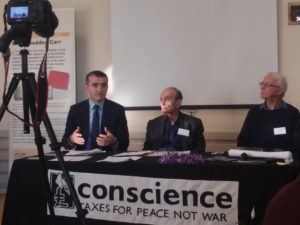 Panel with Ahmad Shahidov (left) of Azerbaijan Institute for Democracy and Human Rights.

One excellent opportunity to learn about international anti-war work came from Ahmad Shahidov (left), who is the director of the Azerbaijan Institute for Democracy and Human Rights. This organization has worked to protect the rights of refugees in the country, to call on Armenia and Azerbaijan to exchange hostages, and to achieve peace between the two countries. He spoke about this work, which is complicated by larger geopolitical forces and by war profiteering. You can see more about his work at http://shahidov.com/en/.

I also met Symon Hill, a staffer with the Peace Pledge Union, an 85-year-old British peace organization that seems to be experiencing a bit of a resurgence. PPU is “the oldest secular pacifist organisation in Britain. Since 1934 it has been campaigning for a warless world. From anti bombing campaigns during WW2 to protest at the remote controlled military drone assassinations of today. Campaigning against the militarisation of Armistice Day in the 30s to the militarisation of society today.” Symon told me that the PPU is growing, and even forming new student groups across the UK—very inspiring. Members take a pledge to not support war, and work on a variety of campaigns. For example, in their No Pride in War campaign, they have gone to pride parades and even disrupted parades that have been led or sponsored by weapons manufacturers.

Watching the documentary “War Schools” and speaking to UK residents taught me how militarized UK society has become. Only about 10 years ago, the government instituted an Armed Forces Day, celebrated with numerous military parades that include armed active duty soldiers marching in formation. The events also feature military equipment and encourage children to familiarize themselves with weapons of war.

Several Veterans for Peace UK veterans are featured in the film, some recounting harrowing wartime experiences, killings they participated in, murders they witnessed, and other atrocities. They are traumatized by their participation in this system, but also continue to show up to promote peace.

During the conference, there was also time for presentations about what each group and country is doing. I gave an oral report on activism within NWTRCC to the group, as well as my impressions on peace tax campaign organizing. A collection of conference proceedings and notes will be available soon. 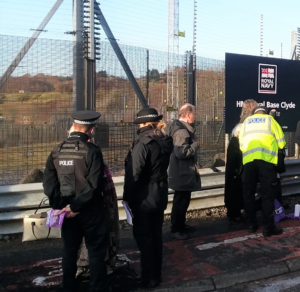 Police at the Clyde Trident nuclear submarine base.

A highlight of the weekend was our Sunday bus trip to Faslane, where the Faslane Peace Camp is located near the Clyde Trident nuclear submarine base. Although we attracted significant police attention, fortunately, there was no incident. I wrote about this trip previously in the NWTRCC blog (https://nwtrcc.org/2019/12/20/opposing-trident-with-faslane-peace-camp-37-years-of-resistance/).

Another big event of the weekend was the official CPTI board meeting. The day-to-day operations of CPTI (https://www.cpti.ws/) have continued at a skeleton level—Christophe Barbey of Switzerland is CPTI’s UN representative, filing reports and other documents through the Human Rights Council. CPTI’s annual expenditures are in the range of £2-3,000, primarily, as far as I could tell, to maintain their legal status and pay Christoph’s expenses for the UN work. They are actively seeking new members (especially those who can become board members), people who want to do work or participate in the UN reports and filings, and new sources of funding. If you are energized by fundraising for CPTI, or other ways to support work at the UN, please contact them! It’s my impression that CPTI is just barely hanging together. As I think other NWTRCC visitors to the international conferences have found, overall, our European counterparts seem to have a greater trust in the UN as an institution, believing that conscientious objectors need to be present there.

Derek Brett of Switzerland had some great stories about his international conscientious objection work. Through the UN status of the International Fellowship of Reconciliation (IFOR) and other organizations, and some hard work, he has participated in helping free conscientious objectors from prison in South Korea, and in many other projects on behalf of COs. Here’s an article which, while it uses a lot of UN jargon and reference to proceedings that you may not be familiar with, says a bit more about this work: https://wri-irg.org/en/story/2018/ifor-statement-delivered-human-rights-council-following-constitutional-court-decision 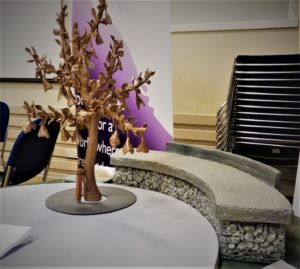 Proposal for a Memorial to Conscientious Objectors.

I also met an American living in Scotland, Brian Fellowes of the Edinburgh Peace and Justice Centre, who sends his greetings to the US! The center has been planning a beautiful Opposing War Memorial in Edinburgh, with the talented design and creation help of artist Kate Ive. Each aspect of the memorial is so carefully thought out and has meaning behind it. I was really quite impressed with it!

My overall impression from the weekend is that the international movement against taxes for war is struggling even more than NWTRCC. Our twice-annual conferences attract at least 15 people, and our November meeting in Oregon attracted a great crowd of 40-50! It was unfortunate that more people could not make it to the UK.

So, at the risk of sounding immodest, and even though our own movement has shrunk over time, we are doing extremely well, comparatively, for an organization focusing on war tax resistance. I attribute a lot of this unity and strength to the fact that war tax resisters are putting a lot more on the line and have a greater need for community and solidarity based on those risks. But I also noted the important work that peace organizations are doing on other issues, including the work of Conscience, Edinburgh Peace and Justice Centre, Peace Pledge Union, and Veterans for Peace UK.

A huge thanks to Conscience for organizing this conference and making space for international gatherings against taxes for war!

And to the NWTRCC network: Thank you for giving me the opportunity to represent NWTRCC in 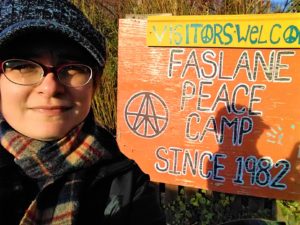 Erica at the Faslane Peace Camp.

Edinburgh! I had a fantastic time and was also able to use some vacation time to see friends and family in England after the conference. I happened to leave England on the day of their general election, December 12, so also got a glimpse into how media coverage of elections works there (much the same as here, unfortunately!).

You can watch some videos from the conference, including some videos I’m in, at https://www.facebook.com/pg/taxesforpeacenotwar/videos/?ref=page_internal.

One thought on “Report on the International Conference for War Tax Resistance and Peace Tax Campaigns – November 28 – December 1, 2019, in Edinburgh, Scotland”