In Episode Number 5, we hear from two war tax resisters who have recently traveled overseas to work with other war resisters and learn more about the real impacts of US warmongering. Jason Rawn has traveled to Asia twice in the past year, visiting Okinawa in Japan and Jeju Island in Korea to organize with local resisters against US military bases. We’ll cover some of the history around Okinawa and Jeju Island, and interview Jason Rawn about his experiences. Dana Visalli had planned a trip to Syria, but the Syrian government denied his visa. Instead, he spent time in Lebanon with Syrian refugees, and also learned about the history and creation of the nation we call Syria. He reads two […]

David Hartsough June 14, 2016 The US and Russian governments are pursuing dangerous policies of nuclear brinkmanship. Many people believe we are closer to nuclear war than at any time since the Cuba missile crisis in 1962. Thirty-one thousand troops from the US and NATO countries are engaged in military maneuvers on the Russian border in Poland – together with tanks, military planes and missiles. The US has just activated an anti-ballistic missile site in Romania which the Russians see as part of an American first strike policy. Now the US can fire missiles with nuclear weapons at Russia, and then the anti-ballistic missiles could shoot down Russian missiles shot toward the west in response, the assumption being only the […] 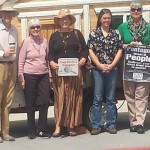 War tax resisters were busy during tax season this year, speaking out about resistance and redirection. Here are some more reports you might have missed: War tax resisters in San Diego held a redirection event, giving away over $6,000 to various groups: “I pay my taxes, but not to the Department of Defense. I pay them instead to the people here working to create peace in San Diego,” said event organizer Anne Barron of SCWTAF. “War is violence in the extreme. I cannot pay for the bombs we rain on countries half-way around the world.” This letter to the editor by Tim Eisenbeis in the Freeman, South Dakota Courier mentions Wally Nelson and also says, “As a Christian, I cannot in […] 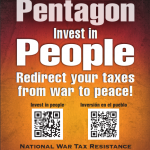 NWTRCC chose the theme “Divest from the Pentagon, Invest in People” for our 2016 Days of War Tax Action. Divestment (also called disinvestment) has been used to galvanize big changes, like abolishing apartheid in South Africa. Today, it’s used in the movements against fossil fuels and Israeli occupation of Palestine, where supporters pressure institutions and corporations to stop investing in certain governments, industries, or businesses. Divestment campaigns don’t always encourage individuals to see their own complicity in the target industry or behavior. While I don’t think we should only focus on changing ourselves, or trying to make ourselves “perfectly” ethical, we should understand if we are upholding the systems we oppose. And when we invest our taxes in war, that’s […] 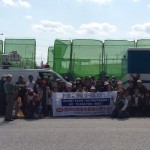 by Jason Rawn (This is the text of a statement Jason gave at a demonstration on Jeju Island. The photo is from a demonstration on Okinawa.) The US military has personnel in at least 175 countries, according to David Swanson in War is a Lie. The US has at least 800 military facilities in other countries. The US misinvests more on war than any other country. The Stockholm International Peace Research Institute estimated the US military budget for 2014 at $610 billion. (Other sources put this figure much higher, at over $1,000,000,000,000.) In comparison, Japan was the 9th biggest military spender, at $45.8 billion, and the Republic of Korea (South Korea) was 10th with $36.7 billion. These figures make me […] 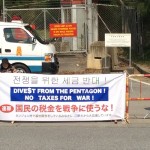 At one time, Professor Yang Yoon-Mo was the most influential film critic in Korea. His influence was felt in film festivals, academia, and media spanning the political spectrum. Since that time, he has changed course and devoted his life to the struggle against the nominally Korean naval base being constructed in Gangjeong village on the South Korean island of Jeju. He has vowed to continue this struggle until death. Although the South Korean tax system puts the responsibility for collecting “tax obligations” on employers, making it difficult to resist in the way that many U.S. war tax resisters refuse to pay by simply not writing checks to the IRS, Professor Yang’s comments on the fraudulent fleecing of taxpayer money will […]

The Korean Navy is destroying Gangjeong Village  (current population around 2,000) and the surrounding area by building a base here. In terms of population, 7-8,000 soldiers and their families are expected in the community. Additionally, bartenders, tattoo artists, prostitutes, and others will be drawn to the area The base itself will accommodate U.S. warships such as Aegis destroyers, nuclear subs, and even aircraft carriers. Pinocchio is a popular character among the resisters here, who believe their government is lying to them (about lots of things, of course, but specifically to this post) about this base’s intended joint civilian- military use. The breathtaking propaganda poster shows a glowing facility with green grass and pristine-looking blue waters harboring 2 warships along with […]