Friday the 29th of November Extinction Rebellion groups internationally will be doing direct actions to wake us all up to the climate crisis and on Friday the 6th of December Sunrise groups will be striking for the climate across the country. Look for actions both of these days near you. 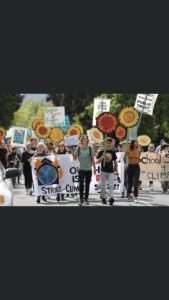 organization with over 485 groups throughout the world.  They are advocating nonviolent direct action to try to save our planet. They believe that if they can get 3% of the people to join them in the streets that more will be convinced to join and that the climate crisis will have a chance to be mitigated.  Extinction Rebellion US is demanding the government tell the truth about the climate and wider ecological emergency, enact legally biding policies to reduce carbon emissions to net zero, and that a just transition must prioritize the most vulnerable people and repair the effect of ongoing ecocide to prevent extinction of human and all species, in order to maintain a livable, just planet for all.

The Sunrise Movement is a youth led organization founded in 2017 advocating political action and nonviolent direct action for climate change. They are pushing the Green New Deal, respect of indigenous land, environmental justice, protection of biodiversity and sustainable agriculture.

These groups organized with other environmental groups a week of actions in September, a climate strike to try to save the world.  Here in Eugene, Oregon we had a week of actions including a day long climate strike, demonstrations and public testimony before the Eugene City Council and Lane County Commissioners, a non violent direct action training and a die in at a Chase Bank, one of the biggest backers of fossil fuel pipelines and other fossil fuel projects.

Extinction Rebellion will be leading actions around the world on Friday, November 29th, what we in the US refer to as Black Friday, the day after Thanksgiving, the biggest shopping day of the year.  In Eugene we had a nonviolent direct action training last Saturday in preparation for the action.  We hope to draw attention to the problem of consumerism and how it has contributed to the climate crisis. I’ll be taking the opportunity to remind my fellow environmentalists as well as all who observe us that the US military is the biggest polluter in the world and that over 50% of our taxes, for those who pay taxes, go to supporting the military industrial complex. In order to have the funds needed to work on the climate crisis the military budget needs to be drastically cut.

The Sunrise Eugene group had a sit in and lie in last Friday at the student union to publicize that many climate refuges from Central America are trying to escape to our country and many more will be coming in the next 10 years due to the climate crisis. They brought attention to Scott Warren who is on trial as a terrorist for leaving water and food for asylum seekers in the desert (Editors note- He was later found not guilty).  I felt hope for our future participating in a nonviolent direct action with students, some who I had known since they were young children, at the University of Oregon.

Sunrise Eugene is joining with Sunrise groups across the country on Friday, December 6th in another climate strike day.  Students across the country will be leaving school to strike for the climate. They are hoping that people of all ages will join them in the streets drawing attention to the dire state of the world.

Seeing all of these folks in the streets protesting nonviolently lifts my spirits.  The environmentalists need us war tax resisters and nonviolent activists. Join us on Friday November 29th and Friday December 6th   in actions in your areas. Perhaps your area will be singing a song we will be singing:

Sing for the Climate

We need to wake up

We need to wise up

We need to open our eyes

We need to build a better future

And we need to start right now.