As we ready our current blog post my thoughts turn to my own experience in the Middle East just as the Trump administration has launched new rumors of impending endless war in the region. In an extrajudicial drone missile strike Iranian Major General Qasem Soleimani was killed. Soleimani (an Iranian) was assassinated at Baghdad International Airport on Iraqi soil without permission of Iraq where the US had been engaged in active warfare for decades. The US escalation comes after Trump walking away from Nuclear negotiations and imposing strict economic sanctions. Iran has now threatened revenge as the US Army deploys an estimated 3,000 additional troops in the 82nd Airborne brigade to the area. The US has ordered all Americans to leave Iraq – civilian contractors and oil corporation executives are currently boarding planes out of the country. 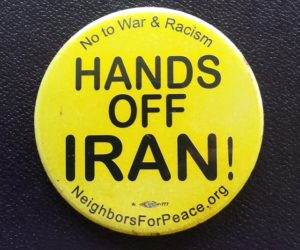 Revived Button from Neighbors for Peace in Chicago. Photo by Chrissy Kirchhoefer.

Before traveling to Iraq with Voices in the Wilderness (now Voices for Creative Nonviolence), I was trying to explain to family about my motivations for going. It was a time of the economic sanctions which were primarily affecting the vulnerable, the young, those who were sick or poor. Since it was not an “active war”, many were not aware of the impact of US policies, especially in the form of economic sanctions and bombing in the “no-fly zone” primarily in the north and south of Iraq by the US and UK for years. My aunt brought up the country song by Alan Jackson that stated “I’m not a  real political man. I watch CNN but I’m not sure I can tell you the difference in Iraq and Iran.”

I would not have known much of the difference between the neighboring countries had it not been from members of Voices who traveled and spoke about their delegations to Iraq and the stories of the people they met and stayed with during their travels throughout the country. They were so moving that I decided I wanted to go and see for myself. I traveled in May of 2002 with a joint delegation with Voices US and UK as well as the Veterans for Peace Iraqi Water Project.

During my two weeks traveling throughout Iraq, I made a close friendship with a man Ibraheem. He helped me laugh through some of the most challenging of experiences. We laughed as we sat crammed in the back of the plane as we  flew through the “no-fly” zone. Members of Voices UK had expressed worry of boarding a plane in Baghdad to Basra concerned that the plane may not have gotten parts since the sanctions were put in place in 1990. Oddly enough Boeing, the same Company that was creating the smart bombs in the no-fly zone was able to bypass the sanctions and sell brand new planes to fly through the no-fly zones. Even stranger was being greeted by Peter, Paul and Mary “Leaving on a jet plane” and all the US themed songs that followed.

While there was much laughter, there was much heartbreak as well. I met a young one who had the remnants of a Boeing smart bomb lodged in his pelvis. I held a young one who was dying of marasmus, severe malnourishment, because of limited medicine. The doctor told us about how hard it was for him to decide which child would receive medicine and which would die. We met mothers who were afraid of giving birth because the Depleted Uranium that caused deformities in babies. We also visited al-Amiriya a shelter that was targeted by the US in the first Gulf War and killing over 400 people mostly women and children.  Some of the those who came together to attempt to seek refuge from the bombings were incinerated.

Prior to the Shock and Awe campaign in 2003 my friend Ibraheem send me an email from Baghdad.  He was concerned he and his family would not survive. He sent his love and hope to meet on another plane. I read his letter to the crowd gathered in the same metro area that was manufacturing those bombs. In the lead up to the bombing campaign I fulfilled a promise to him that I would deliver a message he had for the Boeing executives. His message” Hemingway says ’to live is to fight.’ This slogan was raised by the American. It should be replaced by this phase ‘to live is to love’. Producing weapons is a violation of this new slogan.”

Fortunately Ibraheem survived and I spoke with him recently. He and his family are refugees, no longer able to return home as a result of war. So often when we speak of war and the war budget we lose sight of the humanity behind it. Like the people seeking shelter together, seeking peace and trying to hold on to dear life. While I have learned more of the historical differences between Iraq and Iran. I learn more and more people are fundamentally the same.

Code Pink has insured an apology to the Iranian people. They have also called for a Day of Action throughout the US on January 4th to get US Troops out of Iraq.