Recently I traveled to Edinburgh, Scotland to represent NWTRCC at the International Conference for War Tax Resistance and Peace Tax Campaigns, hosted by Conscience: Taxes for Peace Not War. I’m working on a full conference report, but in the meantime, I wanted to highlight the longtime Scottish resistance campaign against the Trident nuclear submarine.

​A highlight of the weekend was the Sunday bus trip to HMNB Clyde, the military base at which the UK’s Trident-missile armed nuclear submarines are located. The Faslane Peace Camp has been resisting these nuclear weapons since 1982. One of the conference attendees, Willemien, has been living and resisting at Faslane for two years.
​ 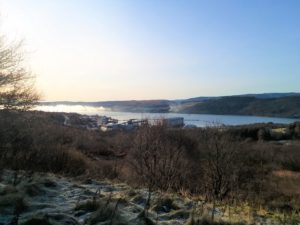 Faslane is a beautiful little area along the shores of Gare Loch. With the morning fog still burning off on the shore, and rolling hills reaching down to the water, it was honestly very hard to imagine why people would want to stick a military base here, let alone nuclear submarines.

​When our little bus pulled into the visitors parking lot at HMNB Clyde, it only took a few minutes for the local police to show up. The police recognized Willemien immediately, since she’s a resident of the peace camp and a frequent protester.

​Our trip coordinator spoke with the police at length about our plans, and then we went over to another base entrance, more visible to passing cars, for a short vigil. The police snapped a lot of photographs of everyone present as we lit a candle, and several people spoke about their opposition to nuclear weapons and support for peace. There was a little singing as well. 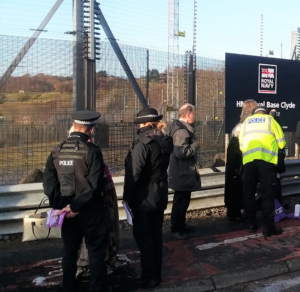 After we concluded our vigil, an officer asked if I “would like to give your details” and I said “no thanks.” Fortunately, I had been pre-alerted by another attendee that police often ask for your personal information at protests (often less politely, or implying that you have to give your information), but you’re not required to do so unless you’re under arrest.

​After the vigil we briefly visited the Faslane Peace Camp (Facebook / website). The camp is rudimentary – wood stoves provide most of the heat, and campers live in rundown trailer RVs or other makeshift homes. But their spirit is really beautiful – the camp is decorated with many slogans, painted caravans, and artwork. 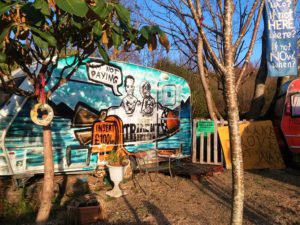 And the Faslane campers and their allies have been maintaining this direct action camp for decades, continuing to put their bodies on the line at significant cost and risk to themselves. Many people demonstrate and are arrested at Faslane every year.

​
Following the conference, I ended up in London for a day and visited the 56A Infoshop, an anarchist resource center and bookshop in the Elephant & Castle area. The infoshop, together with a bike repair project and a food cooperative, has occupied the address for over 30 years. Among their fascinating archive of UK and other countries’ social movement publications, flyers, books, and other resources, 56A has a partial collection of the publications that have come out of Faslane Peace Camp since it was founded, all of which show their rowdy, rebellious nature and commitment to long-term resistance. 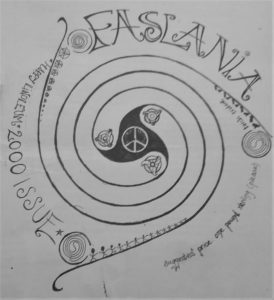 One of my favorite pieces was a list, I think in the 2000 issue, of all the arrests at Faslane in 1999. This list featured such gems as the arrest of a person called Fungus on November 13, 1999, at a Ploughshares action, “‘for being a pain in the arse’ near the Faslane fence.” Teapot was arrested “for snogging a police van” at a Ploughshares action on August 24, 1999. There were many more serious entries on the list too – climbing fences, cutting fences, blocking traffic. And from what I can glean online, this spirit of direct action and resistance persists to this day.

​You can support Faslane Peace Camp by spreading the word about their work, and coordinating supplies donations or volunteers if you know folks in the UK or anyone willing to travel there. There is also a set of routing numbers on their website for doing a donation, although I’m not quite sure of the details of how that would work but they can always use your support.
post by Erica Leigh