A rare event occurred in my life that I found myself traveling to Georgia for two important events in peacemaking recently. The first event was for the Kings Bay Plowshares 7 trial in Brunswick and the second was the 30th Anniversary Commemorative Gathering at Fort Benning with the School of the Americas Watch. Both events were heavily populated with War Tax Resisters as well as potential War Tax Resisters. 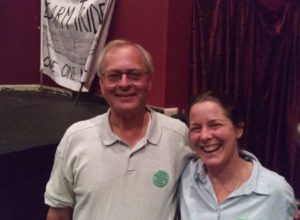 The Kings Bay Plowshares 7 (KBP7) action took place in the home of long time War Tax Resister (WTR) Robert Randall who helped organize many of the events around the trial as well as bringing attention to the Trident nuclear weapons for many decades. Like many WTRs, he had focused on the militarism in one’s backyard, making the connection between our complicity in military spending and its impact our communities.

The 7 activists are part of a world-wide movement of Plowshares actions starting in 1980, focused on eliminating nuclear weapons. The KBP7 focused upon Brunswick to draw attention to the potentially destructive and catastrophic reach of the 6 nuclear equipped submarines that have the potential to destroy the world many times over. One of the main messages of the action was “The ultimate logic of Trident is Omnicide.”  Eventually all 7 were found guilty of 3 felonies and 1 misdemeanor. Their sentencing will likely happen in the new year; they face up to 25 years in prison.

The gathering brought together over 200 people from throughout the US in support of their action and to declare a loud message of ‘No to Militarism.’ I had the opportunity to meet with many long-time WTRs. Their stories of peacemaking over many decades were inspirational from monitoring the “white trains” (nuclear weapon shipments by rail) to current struggles for racial justice. It felt very much like a homecoming.

The School of the Americas Watch returned to Fort Benning, Georgia after holding vigil at the Southern US border in recent years. The 30th commemoration of the assassination of Jesuit priests, their co-worker, Elba and her 16 year old daughter Celina, at the Central America University brought people back to Fort Benning where initial connections were made between the School of the Americas that trains death squads and the atrocities committed in Latin America. 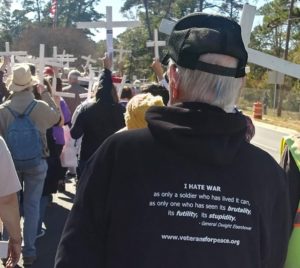 At both Georgia gatherings War Tax Resistance/Redirection was a prominent theme. Many of those gathered were WTRs and shared the message  of our collective complicity in paying for war and the need to redirect resources to our community needs. On the witness stand, Martha Hennessy was asked by the prosecutor about what she meant when she said she compromised her beliefs. The granddaughter of Dorothy Day, who helped found the Catholic Worker, stated “Yes I compromised. I worked. I paid taxes. We pay for all of this. We are stuck in a permanent war economy.”

During the morning panel discussion of “SOA Watch: Bridging the Past and the Present of the Organization, the Movement and Lessons Learned over the last 30 years of Resistance,” Kathy Boylan, a WTR from the Washington DC Catholic Worker, brought the message of our complicity in these atrocities by paying taxes for war.  She reminded those gathered that our taxes fund ICE raids, detentions, and deportations. Her address drew many people to NWTRCC’s table with inquiries of how to become a WTR.

Returning to Georgia brought much to my mind. It was at Fort Benning that I first learned about WTR with information from NWTRCC and met many inspirational peacemakers. That initial trip to Georgia 22 years ago transformed my life, encouraging me to join the Catholic Worker movement and become a War Tax Resister. I formed many relationships with others who were living joyful lives determined to not compromising their values, but rather paving a path of how I wanted to live my life. While tabling with NWTRCC material I heard from many, “Thanks for being here.”

At both celebrations I was reminded that there is a thriving Peace Movement in the U.S. with a rich history of resistance with WTRs at the heart of it. My time with so many peacemakers brought the lyrics of Ray Charles song, “Georgia On My Mind,” celebrating the work that has occurred over the decades and excited about the work that exists to counter Omnicide in our current times. 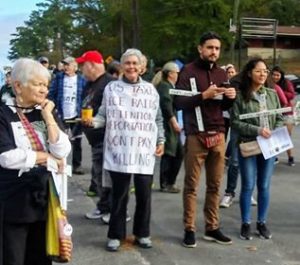 Other arms reach out to me

Still in peaceful dreams I see

The road leads back to you

No peace, no peace I find

Keeps Georgia on my mind

Keeps Georgia on my mind

5 thoughts on “Georgia on My Mind”