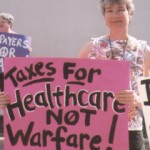 While there has been some comparison of military spending versus medical costs, it seems as though many are less willing to address the issue of societal sickness caused by military spending. It needs to be named, identified, and articulated. And even fewer people refuse to stop paying for death and destruction. At a recent webinar with U.N. officials, the Vatican called for disarmament in light of the health crisis experienced as a result of the coronavirus from a humanizing perspective: “The pandemic offers us a precious opportunity… prompts us to question how much the huge military expenditures are really able to guarantee the security of individual populations, of how much these resources could and should be allocated to investments to […] 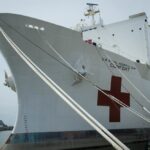 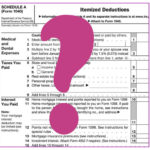 How will the new tax bill affect war tax resisters (WTRs)? This is something we will all be learning by experience in the next couple years. One thing that is clear: the IRS is pretty overwhelmed by all the new work and continued budget cuts. That makes it harder for them to enforce collection (although personally, since I resist as a protest, I’d just as soon not be totally ignored). So, for a first look, here are a few things that come to mind: If you don’t file, you probably get to ignore the whole thing, at least as far as tax details and forms go, unless you’re a wage employee (see below). You might not ignore the fact that […]

Recent questions to the war tax resistance hotline (aka, the NWTRCC office, 800-269-7464) have been about inheritance and health care. It just so happens that we have updated the booklet in our Practical War Tax Resistance Series that deals with these topics. Look for #7, Health Care and Income Security for War Tax Resisters. As anyone who has applied knows, the Affordable Care Act (“Obamacare”) has not made shopping for health insurance easy for those of us not covered by an employer, Medicare, or other plan. In addition, what makes it hard to counsel war tax resisters is that the options vary from state to state. Luckily we do have a network of counselors and contacts who can be called […]

(This article appeared in the June/July 2014 edition of More than a Paycheck, NWTRCC’s bimonthly newsletter, but several links have been added.) By Robert G. Randall II Several of you have written about your own experiences with the Affordable Care Act (ACA, I call it Obamasurance rather than Obamacare, because, other than the free preventive care included in each policy, it really is not care; it’s only an opportunity to wrestle with an insurance company over who will pay for what care; that’s better than nothing, but we all know that real care will only come with some kind of single-payer or socialized medical system.) Because my wife and I have had a good experience with ACA, I think I […]

Within the war tax resistance network we’ve been following Obamacare for a while, but a tax day article in the New York Times added to my own concerns/suspicions/disgust about the new health care law, the Affordable Care Act (ACA), commonly known at Obamacare. The article, “Tax Preparers’ New Role: Health-Coverage Advisers,” makes obvious the connection that war tax resisters have been concerned about: the central role of the IRS. Provisions of the law such as the requirement to have health coverage and the management of the subsidies are written into the tax code. Next year’s tax forms will have new lines to track this information. Now it’s not “death and taxes” but “health and taxes,” among other issues. “It’s a […]