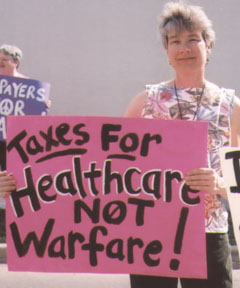 Within the war tax resistance network we’ve been following Obamacare for a while, but a tax day article in the New York Times added to my own concerns/suspicions/disgust about the new health care law, the Affordable Care Act (ACA), commonly known at Obamacare.

The article, “Tax Preparers’ New Role: Health-Coverage Advisers,” makes obvious the connection that war tax resisters have been concerned about: the central role of the IRS. Provisions of the law such as the requirement to have health coverage and the management of the subsidies are written into the tax code. Next year’s tax forms will have new lines to track this information. Now it’s not “death and taxes” but “health and taxes,” among other issues.

“It’s a tremendous business opportunity,” says one administrator at a tax service company quoted in the article. Tax preparers will be able to charge more for their services since the government managed to pass a law that is so confusing thousands of people don’t know how to navigate the system themselves. Adding confusion onto the confusion of the tax code and annual filing means that not only do the insurance companies benefit from this legislation, but there’s profit for many more.

The focus on “market” and profit has driven Dr. Margaret Flowers to declare herself a conscientious objector to the ACA. She has worked for years for a Medicare for all system (ever use the Medicare website? It works!). For those wanting to protest with her, the article includes a petition to “Tell Obama the ACA is an insurance scam.”

Aside for political questions and objections, the problems for war tax resisters are real. Calls coming into the NWTRCC office have been mostly from nonfilers, generally people who live on low income or off-the-books and whose choice has been to stay out of the system. Some have had health insurance, but now the ACA would force them onto the books, an option they find objectionable.

One resister asked an insurance marketplace helper whether having a tax debt would disqualify her for the subsidy. The reply: Past debt/issues will not in themselves cause any problem in qualifying for the tax credit (i.e., the subsidy to reduce one’s monthly insurance premium). However, everyone receiving the tax credits in 2014 must agree to file a 2014 tax return, and on that return they will need to reconcile their actual 2014 income with projected 2014 income which was the basis for the tax credits. If they don’t file the 2014 return, it can cause a problem renewing the tax credits in future years. It is uncertain when this might catch up – 2014 return wouldn’t be due until 4/15/15 so certainly not before then.”

In addition, this counselor said: “…if the consumer overestimates 2014 income, and thus on the 2014 return an insurance tax credit refund would be in order, then one could speculate on whether the IRS would issue the refund or apply it toward other tax debts to reduce that debt. We have no guidance on this at this time.” And, this leads to the point that if you earn more during the year than you expected, you may end up having to pay back some of the subsidy when you file.

Others who tried to apply found other roadblocks:

• If a couple applies through the exchanges, they find that they cannot get the insurance subsidy if they file separately. Many couples in the war tax resistance network keep their finances separate, so if their combined income allows for a plan that would be affordable with the subsidy, they can’t take advantage of it unless they file jointly.

• David Gross is a filing tax resister who found a very affordable plan and wrote up his positive story here. He also recommends that taxpayers can lower their taxable income by making payments to a Health Savings Account. 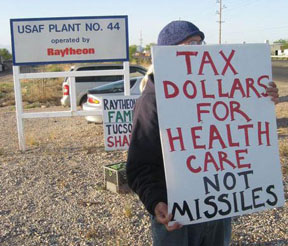 NWTRCC is collecting stories about the ACA and war tax resistance. Were you successful in applying or did you run into a roadblock? Were you a nonfiler who decided to opt in? Are you joining Dr. Flowers in her conscientious objection to the ACA? Please share your stories here or by email.

NWTRCC has published similar information in our newsletter More Than A Paycheck in December 2013, February 2014, and April 2014.