The most visible role of the U.S. military in the past year has been the fly overs of extremely expensive military bombers to express appreciation to healthcare workers beginning in May of 2020 and showing up at the Superbowl, typically a big advertising opportunity for the military. Even the sportscaster Joe Buck pointing out the obvious of “That’s your hard earned money and tax dollars at work!” and  questioned the amount of jet fuel used for the flyover. Health care workers sat in place of the cardboard cutouts at the Superbowl in an attempt to alleviate or distract from the tremendous toll taken on health care workers including  93% of health care workers were experiencing stress, 86% reported experiencing anxiety, 77% reported frustration, 76% reported exhaustion and burnout, and 75% said they were overwhelmed. 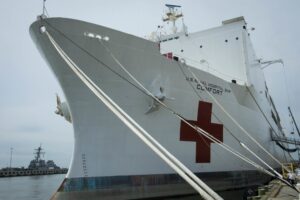 Military spending can be witnessed in the costs to the health of our country. No where else is the contrast between life and death so stark. As we are approaching a year into the pandemic and recently surpassed the ½ million deaths attributed to Covid 19, the cost comparisons seem more tangible to those playing attention that the U.S. spent close to 50% of taxpayer money on the military. The Department of Defense reports that the U.S. military has spent $13.34 trillion between 2000 and 2019 averaging about $825 billion per year.  Put another way the US spends over $2 billion per day or over $1 million per minute on the military.

The National Priorities Project has an interactive page that lays out the cost comparisons of what the money spent on the military could be spent on instead to create healthy communities. The hourly operating costs of the F-35, one of the US military’s most expensive weapons programs, would provide the annual salary of one nurse. Sometimes it is good to have something tangible to relate the numbers— Statista breaks it down here: 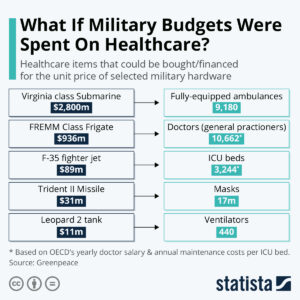 Scrutiny of military spending has increased as people have questioned what role the military plays in protecting people in the U.S. when communities are told there are not resources for the most basics of human health. Some states have deployed the National Guard to assist in Covid response (37,000) more have been deployed for the “civil unrest” related to racial justice protests this past summer (41,500.)

While the military may not have had a large visible presence domestically, the language and metaphor of war has increased in the last year as we wage a war on the virus. The parallels between Operation Warp Speed and the Manhattan Project have been made public but not the Department of Defense contracts to Advanced Technologies International. ATI serves as the intermediary between federal contracts and pharmaceutical companies obscuring transparency as other transactions agreements OTAs that the DoD has been using more frequently in recent years.  It  was recently revealed that the Trump administration siphoned $10 billion from the Provider Relief Fund intended to support hospitals and healthcare workers who have faced layoffs and funneled it to Operation Warp Speed.

The U.S. is the only country of the 36 in the Organization for Economic Cooperation and Development OECD that does not have universal health care as reported in “It’s Time To Rein In Inflated Military Budgets.” Prior to the pandemic, an estimated 27 million people in the U.S. did not have healthcare insurance and about the same amount have lost coverage since then as they have lost their jobs during the pandemic. 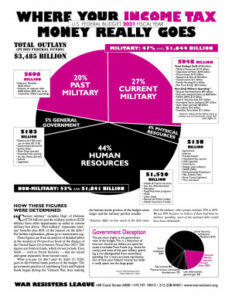 At the same time health care costs in the U.S. are some of the highest in the world resulting in people in the US paying more than $3.6 trillion for healthcare per year with less than 3% spent on public health and prevention. The result has been epidemic proportions of diabetes, hypertension, heart and lung disease and obesity which all increase vulnerability to Covid 19. Life expectancy has been decreasing in recent years related to those health issues as well as an increase in deaths of despair, those attributed to suicide, drug overdoses and symptoms associated with alcohol abuse. Then as if in the perfect storm of the first 6 months of 2020 life expectancy fell by 2.7 years for non-Hispanic Blacks, 1.7 years for Hispanics and 0.8 years for non-Hispanic whites as a result of all those factors.

The pandemic has been a period of pause and reevaluation for some to step back and take a more holistic view. The virus has provided the reminder of our interconnectedness. This time has served as a reminder of how fragile we as a species as well as all life forms on this planet. One of the founding members of Physicians for Social Responsibility recently passed away; his obituary mentioned how he joined with physicians from the Soviet Dr. Union to create the International Physicians for the Prevention of Nuclear War. Dr. Lown had concluded that a nuclear attack on one city would exhaust all the nation’s medical resources just to treat the burn victims. While we haven’t intentionally set off a nuclear explosion in the decades since that statement was made, the health care system and it’s workers have become exhausted with only crumbles from the federal pie.

3 thoughts on “Military Budget of Little Comfort to Healthcare Workers”