It’s time to take stock of your current war tax resistance strategy and prepare for any changes you want to make in the New Year. Are you new to the concept of war tax resistance, and not sure how to get started? Read this list of small ways to start WTR, and see which one(s) you can adopt! You can also contact a war tax resistance counselor in your area to talk through your choices. Are you a Don’t Owe Nothin’ style war tax resister, who takes legal tax deductions to get your income below a taxable level? Then don’t forget to take advantage of opportunities to contribute to education, health savings, or retirement funds, or to make charitable contributions. […]

November 1-3 was National War Tax Resistance’s semiannual gathering, held this time in Manhattan, New York. We were hosted by Maryhouse Catholic Worker and Sixth Street Community Center, as well as for our Saturday dinner in Brooklyn by Ruth Benn, NWTRCC coordinator, and Ed Hedemann. As usual, it was energizing and cheering to be with everyone, meeting old friends again and getting to know some of the local war tax resisters from New York who I haven’t met on other occasions. Friday morning I sat in on NWTRCC’s Administrative Committee meeting and discussed some things relating to my work as social media consultant. After lunch at a local deli, I broke off from the Ad Comm meeting to head over […]

The chickens were busy scratching and pecking for bits to eat, while war tax resisters were busy putting people over weapons at the 28th Annual New England Regional Gathering of War Tax Resisters and Supporters at the Amazing Planet! Farm & Justice Center in Vermont, September 27-29. The location was amazingly beautiful, with the leaves just turning and the clear sky and bright stars at night. It’s also totally amazing that a loose connection of war tax resisters in New England has managed to pull off a gathering every year since 1985, if I am counting that right. At the end of each gathering they ask for volunteers to work on the next year’s get-together, and somehow, over all these […] 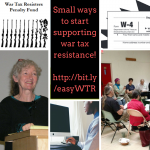 War tax resistance (WTR) is an empowering and rewarding form of civil disobedience. However, some people find that the first step of “becoming” a war tax resister is intimidating. The government tells us that they have our best interests at heart and that the IRS is an enormous, omniscient, omnipotent entity that has the power to ruin our entire lives. Neither of these things is necessarily true. If you’re ready to take another step in your war tax resistance journey and want to start small, here are some things you can do: 1) Write a letter to the editor of your newspaper or comment on a major political blog or article, questioning military spending priorities and expressing support for people […]