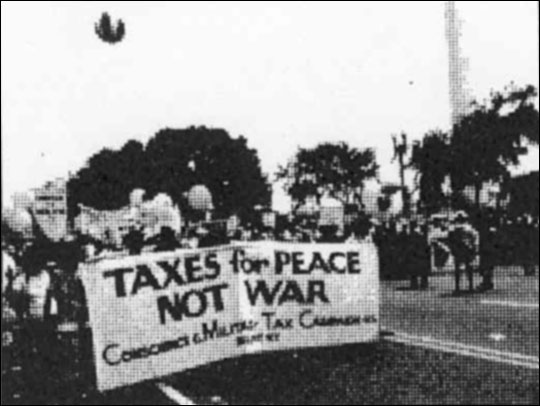 Bruce Chrisman, Carbondale, Ill., was sentenced to a year voluntary service and 3 years probation for failure to file a return. Paul Monsky, Cambridge, Mass. was convicted and sentenced to probation for inflating his W-4 form. For more detail about war tax resisters taken to court, see www.nwtrcc.org/convicted_wtr.php.

Conscience and Military Tax Campaign established an escrow account to hold refused tax dollars until the passage of the Peace Tax Fund bill. The CMTC Escrow Account is to become the largest Alternative Fund in the U.S., holding hundreds of thousands of dollars from hundreds of depositors.

The Campaign for Tax Refusal was launched by the Andalusian Assembly for Nonviolence (AANV). Tax resisters are encouraged to refuse paying the 11% military portion of a year-end additional tax that citizens are required to pay. By the decade’s end a fund of withheld taxes amounted to 8,565,528 pesetas deposited by some 1,500 resisters.

Following a series of arrests of War Resisters League leafleters inside the Manhattan IRS waiting room on Tax Day, federal and New York State courts independently ruled that the IRS must allow leafleting in the IRS areas open to the public. 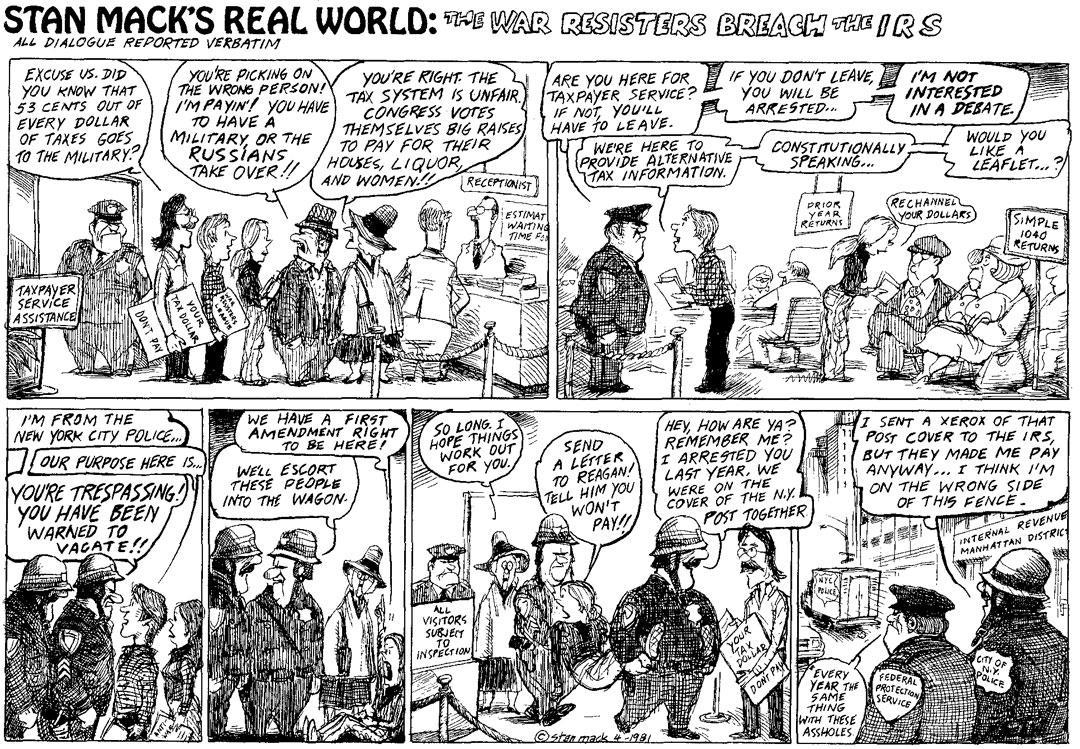 A movement to resist war taxes began in opposition to the introduction into Europe of 572 U.S. Pershing II and cruise missiles. Hundreds refused a symbolic 5.72 DM on the car tax.

Roman Catholic Archbishop Raymond Hunthausen of Seattle urged citizens to refuse to pay 50% of their income taxes to protest spending on nuclear weapons. 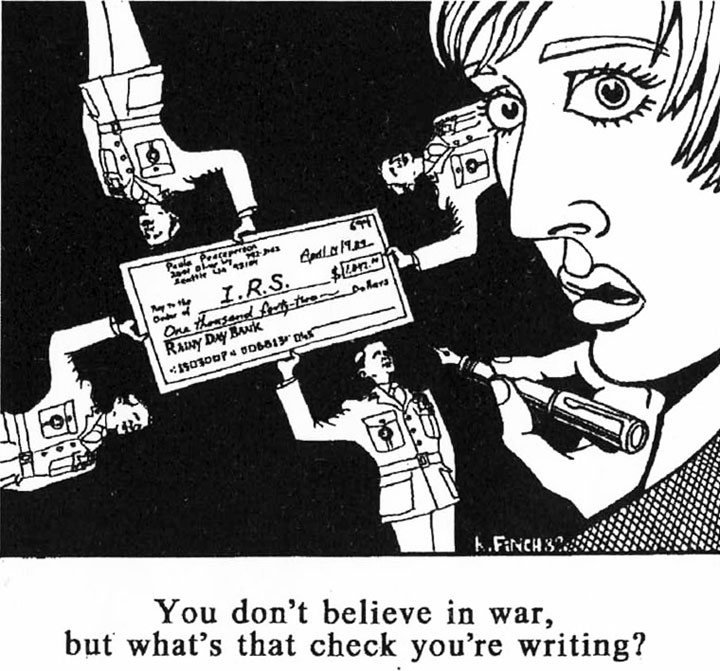 The National War Tax Resistance Coordinating Committee was founded at a conference of war tax resisters in Washington, D.C., initiated by the War Resisters League and the Center on Law & Pacifism.

Miriam Redstone and David Dillman (right), of Occidental, California, got a lot of mileage out of theIRS’s 1985 seizure of their 1969 Dodge, “Dolly”. TheIRS spent $345 to auction off the car, and received only $105 from a man who immediately returned the car to its owners. The event galvanized community support for the couple’s war tax resistance.

The Peace Tax Campaign began. It established a peace tax fund so that taxpayers opposed to participation in war could redirect their war tax portion (about 5–6% of government spending) for non-military purposes.

1983: Freedom of Conscience Invoked in Canada

Dr. Jerilynn Prior appealed to the Canadian federal tax court saying that the Income Tax Act violated her religious and conscientious beliefs. Subsequently, she appealed her case to the Canadian Supreme Court and finally to the UN Human Rights Commission in Geneva, Switzerland, the first case of this kind that the Commission had agreed to hear. Dr. Prior’s fight ended unsuccessfully.

Based on tax pie charts produced since 1977 for various WRL publications, in 1984 War Resisters League publishes the first annual street flyer — called “Where Your Income Tax Money Really Goes” — with an analysis of the President’s 1985 Federal Budget proposal on the front and “what you can do” on the back. The flyer has been published every year since and is used by organizers especially on Tax Day in front of IRS offices, post offices, and federal buildings across the country.

The court ruled in favor of Larry Bassett, the third war tax resister to refuse to turn over financial records to the IRS based on Fifth Amendment grounds. For more about war tax resisters in court, see www.nwtrcc.org/convicted_wtr.php.

The first international conference on war tax resistance was held in Tubingen, West Germany. Over 100 people from 13 countries participated.

In a nationally televised case, retired librarian, Quaker and war tax resister Arthur Windsor was sent to prison on a 28-day sentence for refusing to pay taxes for Britain’s military spending.

Skattebetalare for Fred (Taxpayers for Peace) was founded. In the mid-1990s it began an annual outreach campaign called “Fifty for Peace,” which granted redirected Swedish crowns to humanitarian causes as well as to a fund to support conscientious objectors who incurred financial penalties.

Germany’s Peace Tax Initiative (later renamed Friedenssteuer-Netzwerk) printed stickers saying “No More for Military” to put on currency paying for taxed items like gas and restaurants, notifying receivers that the taxes were paid under protest because 25% would go to the arms race.

As in previous years when he had offered “alternative payments” for war taxes – 94 shovels (1986) and 104 trees (1987) – Robert Burrowes attempted to pay ‘in kind’ with a trailer-load of Aboriginal “land” to return to its owners. Senator Jo Vallentine redirected 10% of her taxes to Melbourne’s Peace and Development Foundation.

Franco Perna became the first known war tax resister here to withhold the military portion of the income tax. He paid the 1.14% war tax portion to a state-administered development fund for economically deprived countries. Perna is self-employed; otherwise, it is nearly impossible to resist because of the pay-as-you-earn system in Europe.

The village of Beit Sahour unanimously decided to withhold taxes from the Israeli regime. Part of their statement read, “We will not finance the bullets that kill our children, the growing number of prisons, the expenses of the occupying army. We want no more than what you have: freedom and our own representatives to pay taxes to.” 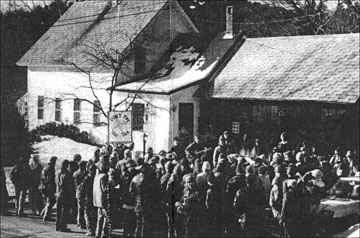 The IRS seized two homes in Colrain, Mass. With the assistance of more than 500 supporters, the Pioneer Valley War Tax Resisters mounted a four-year nonviolent vigil at Randy Kehler and Betsy Corner’s home. Kehler and, later, other vigilers on the land were jailed. Two low-income housing units were built with resisted taxes through the Swords into Ploughshares project. 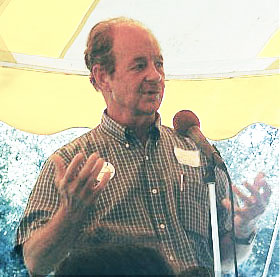 War tax resisters Don Mosley and Max Rice from Georgia were sentenced to 60 days but served 40 days for refusing to give the IRS financial information. The court did not accept their use of the First Amendment. For more detail about war tax resisters taken to court, see www.nwtrcc.org/convicted_wtr.php.