Jim Shea, Vienna, Va., became the first of 17 war tax resisters indicted between 1970 and 1973 for claiming too many dependents on their W-4 form, including Lyle Snider (pictured right with Sue and Nathan), Greensboro, NC, who was arrested in 1972 for claiming 3 billion dependents — the population of the Earth. He was convicted and sentenced to 9 months but that conviction was later overturned in appeals court.

Ultimately, 11 would be convicted but only 7 spent time in jail ranging from 10 days to 9 months. In 1972 the IRS changed the W-4 form to broaden the definition of exemptions from dependents to allowances thus making it harder to prove falsification.

A group of war tax refusers and others concerned in the Ann Arbor, Michigan, area began meeting to find a legal alternative to paying taxes for military purposes. This group developed the World Peace Tax Fund bill. This proposed legislation would allow persons to declare themselves conscientious objectors to military taxation on their tax returns. 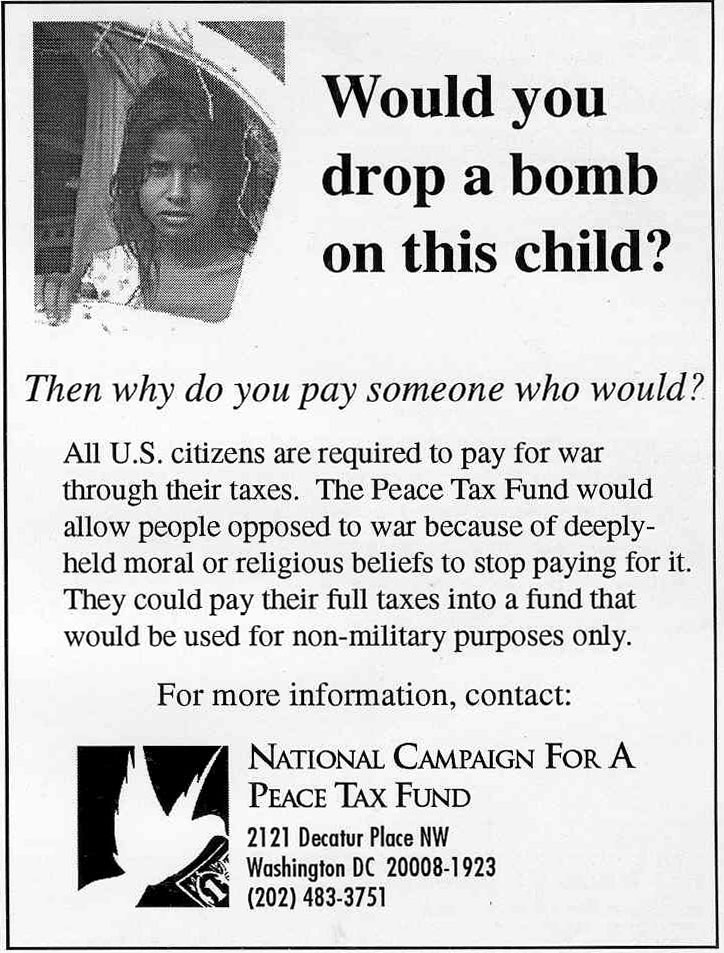 A committee composed largely of church and peace group lobbyists was formed in Washington. They persuade Rep. Ronald Dellums(D-Calif.) and nine other U.S. Representatives to introduce theWorld Peace Tax Fund bill into Congress for the first time. 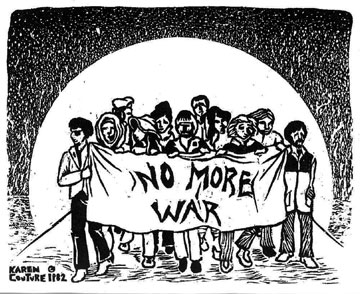 During the Indochina War, war tax resistance gained its greatest strength ever in the history of the United States. National War Tax Resistancehad 192 WTR Centers and 55 alternative funds in 45 states.

As a result of the increased war tax resistance during the Vietnam War, the IRS seized at least 30 vehicles and five houses between 1967 and 1976. In one notorious 1972 case of overreaction, the IRS seized a year-old car owned by Arnold Cuba of Austin, Tex., for $2.44 in unpaid telephone tax. Though the car was returned a week later (because his bank account was seized instead), this case reached Sen. Joseph Montoya (D-N.M.) who had just begun investigating wide-spread complaints of IRS harassment.

Modern war tax resistance started here when 32 churchgoers refused to participate in the military. The resisters who have refused military taxes (20% of the budget) eventually have been forced to pay, and also run the risk of being sent to jail for ten days for every year of refusal.

“I cannot contribute one more dollar toward the purchase of more bombs and bullets,” wrote Jane Briggs Hart, wife of Sen. Philip A. Hart (D-Mich.), to the IRS on May 10, 1972, as she refused to pay her quarterly estimated taxes of $6,200. Though she had thought about doing this for a long time, it was Pres. Nixon’s announcement on May 8 of the mining of Haiphong’s harbor in Vietnam that convinced her to go ahead. Sen. Hart said that while he disagrees with his wife’s action, he would be more upset if she didn’t follow her conscience.

Three thousand tax refusers supported stopping a military base expansion into the sheep farming region of Larzac. It was a nonviolent struggle of the peasants, which ended in victory in 1981 with the cancellation of the expansion.

Martha Tranquilli, Sacramento, Calif., was indicted and convicted in 1973 for “tax fraud” for claiming six peace groups as dependents on herIRS 1040 form. She was sentenced to 9 months, appealed and lost, then eventually served 7½ months in a California prison in 1974.

Conscientious Objectors to the Military Tax (COMIT) was founded, largely through the efforts of Michio Ohno and seventy others. The group has pursued war tax resistance and suing the government to recover their withheld (or seized) war taxes. The Supreme Court did not recognize their case. Although the Japanese constitution does not permit military expenditures to exceed 1%, that limit has been surpassed.

National War Tax Resistance folded. With the end of the Vietnam War interest in war tax resistance declined, though thousands continued to refuse.

Robin Harper, Philadelphia, was the first war tax resister to use the Fifth Amendment to the U.S. Constitution (“No person shall be… compelled in any criminal case to be a witness against himself”) in Federal District Court, arguing that to turn over records to the IRS might aid their potential prosecution of the resister. Margaret Haworth, New York, also succeeded in using the Fifth in 1975, as did four other war tax resisters in 1985 (New York), 1989 (New York), 1990 (Baltimore), and 1999 (New York).

The Peace Pledge Union (PPU) began a legislative effort to create a conscientious objector status to military taxation. PPU refused to turn over 45% of its staff’s tax withholdings. The Peace Tax Campaign joined PPU in withholding the military portion (14%) of its corporate tax in 1985.

The group that became Conscience Canada (CC) was founded to recognize Canadians’ right to freedom of conscience and work for the legal right not to pay for war. They administer a Peace Tax Fund, organize actions, and publish a newsletter.

Members of the three historic peace churches (Quakers, Brethren, and Mennonites) issued a New Call to Peacemaking. The call was in response to the growing nuclear arms race and military budget. Other churches joined, particularly Catholic.

The Center on Law and Pacifism was formed to focus on the relationship of pacifism to law and legal institutions. The Center provided legal counsel to a number of war tax refusers.

Beweging Weigering Defensiebelasting (BDW), or the War Tax Resistance Movement, was formed by a few peace organizations to protest the announcement that 572 Pershing II and cruise missiles were to be stationed in Europe. The Don’t Pay for Cruise and Pershing II campaign encouraged objectors to refuse either 5.72 guilders (symbolizing the 572 missiles) of their Value Added Tax on gas bills, or 950 guilders ($500) of their income tax, which represented the military’s share of the budget.

The Center on Law and Pacifism produced the first edition of People Pay for Peace: A Military Tax Refusal Guide for the Radical Religious Pacifist by William Durland. It went through two more editions (1982 pictured right).