“The greatest changes in history have only come when people are willing to put everything on the line.”

While marching in the financial district in San Francisco to protest the impending Iraq invasion, celebrated tree-sitter and author Julia Butterfly Hill chose to take another stand: she would resist her full $150,000 federal tax liability (the result of a significant legal settlement). She donated that money to after school programs, arts and cultural programs, community gardens, programs for Native Americans, alternatives to incarceration, and environmental protection programs. In her press statement she said, “I am not avoiding paying taxes. I have thought through this very carefully, and with a clear mind and heart I am humanely redirecting my tax payments to where they belong, because our current federal government refuses to do so.” You can see her appearance in NWTRCC’s film Death and Taxes here. She remains active — check out her website.

Iraq Pledge of Resistance, War Resisters League (WRL), and NWTRCC created Hang Up On War! to resist the U.S. war on and occupation of Iraq and to oppose the larger policies of “pre-emptive war” and the “endless” war on terrorism. While the federal tax on a monthly telephone bill is relatively small, this tax raised $89 billion from 1966 to 2001, and about $6 billion per year until 2006 when the tax was dropped from long distance calls (it remains on local phone bills). 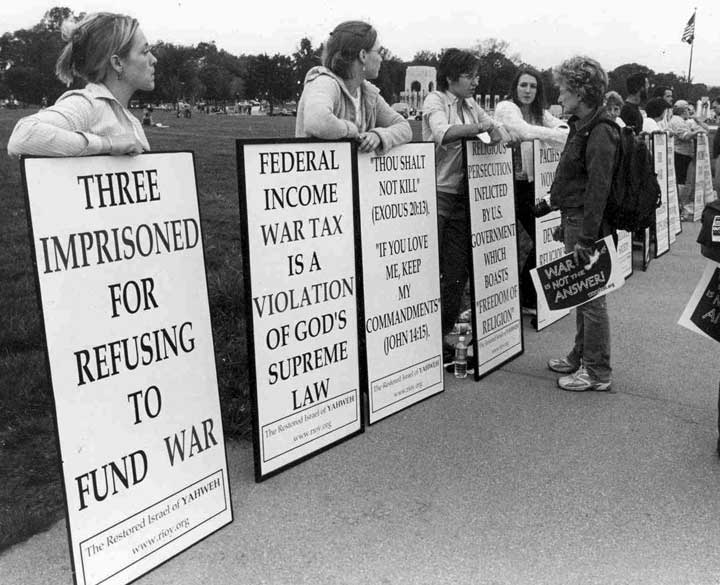 Kevin McKee, Joe Donato, and Inge Donato were convicted by a jury in federal court in Camden, New Jersey, on charges including “conspiring to defraud the United States” and “attempted evasion of employment taxes.” (The latter charges, along with that of failure to file personal income tax returns, were later overturned on appeal.) They were the first war tax resisters to be convicted of these most serious criminal charges in the Internal Revenue Code due to their religious beliefs. Theirs also were the longest sentence received for such “crimes.” In particular, they were singled out for failing to withhold and pay over the employment tax on the McKee-Donato Construction Company employees who were fellow members of the Restored Israel of Yahweh, a small unaffiliated Bible-study based religious society in southern New Jersey, which has a long history of refusing to support war and military taxes due to their religious beliefs.

Renowned criminal defense lawyer J. Tony Serra was convicted of the misdemeanor “failure to pay” $44,000 for tax years 1998 and 1999 and sentenced to ten months and $100,000 (what the IRS guessed he owed over a five-year period). He was one of only two war tax resisters since World War II to have been jailed on such a charge. He served nine months in Lompoc Federal Penitentiary in California and a month in a halfway house. Twice before — in 1974 and 1986 — Serra had been convicted because of his war tax resistance. Click here for a profile of him and his resistance to authority.

“They kill twice. First, they directly enable war . . . particularly paying for weapons. Second, taxes allocated for war represent a distortion of priorities. Money is taken away from the important work of healing and is spent to destroy and kill.”

For 24 years Marian Franz was the Executive Director of the National Campaign for a Peace Tax Fund (NCPTF), which works for lawful recognition of the right of conscientious objection to military taxation (COMT). With tremendous energy and vision, broad knowledge, and wonderful gifts of writing and speaking, Marian balanced effectively both leadership of NCPTF and lobbying in Congress for the Religious Freedom Peace Tax Fund Bill.

In its first year the War Tax Boycott publicly registered over 500 people, many of whom decided to do war tax resistance and redirection for the first time. Since 2007 signers to the War Tax Boycott have redirected over $400,000 to humanitarian programs, including medical aid for Katrina survivors, support for Iraqi refugees in Jordan, food banks, programs for the homeless, books for prisoners, environmental projects, peace groups, and hundreds of other nonprofit organizations in the U.S. and around the world.

“The right of conscientious objection to conscription to military service has been recognized in most democracies, including in the U.K. in the Military Service Act (1916). The right not to pay taxes for military purposes is a logical extension of the right to refuse to take part in active military service.”

The European Court of Human Rights in Strasbourg refused to consider the Peace Tax Seven’s application for a judicial review of British law relating to military taxation under the European Convention on Human Rights. The Court’s refusal was not subject to appeal and brought to an end a five-year national and international legal campaign by seven war tax resisters in Britain.

NWTRCC produced the new film Death and Taxes, which introduces people to war tax resistance/refusal through the stories and explanations of 28 active resisters and experts.