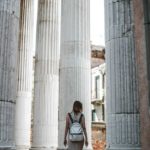 I grew up in a constant shadow of wars—from bomb shelters when I was a child, through Vietnam, the “cold war,” and ceaseless hot ones since then. When I discovered in my 30s that besides what we directly participated in, our government was also fomenting wars all over the world and supplying the arms for them, sometimes to both sides, I vowed myself to peace. That meant I would not help war efforts in any way, including paying for them or for weapons, buying products from companies which profited from war, and every other way that came to my attention. The only way I felt comfortable resisting taxes (other than the phone tax resistance during Vietnam) was to keep my […] 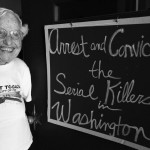 NWTRCC Coordinator Lincoln Rice wrote yesterday:  “Brandywine in Philadelphia sent out an email on their list today about Frances Crowe, who is in hospice. She’s been a longtime supporter of NWTRCC, whom some of you may know. Here is the note from Brandywine: “Yes, the amazing peacemaker, Frances Crowe, is in hospice. Friends and loved ones predict she is soon to leave us. Frances is still able to receive visitors and field phone calls. If you wish to say Godspeed and express your gratitude for her magnificent life you may do so. Her number is: 413 586-4950 [Editor’s Note: Frances passed away at her home on Tuesday August 27th. Here is link to a NY Times article about her life.] […]

[Editor’s Note: The following are excerpts from a letter that Howard Waitzkin and Mi Ra Lee wrote the IRS and included with their 2017 tax return. Thank you for sharing!] Statement of Resistance from Howard Waitzkin to the IRS for Tax Year 2017: I am a Conscientious Objector (CO) to war, based on religious and ethical beliefs, as recognized and certified 36 years ago by the U.S. Selective Service System. My beliefs as a CO have prevented me from participating in military service. However, I have devoted my whole professional career to many forms of alternative service, trying to meet the unmet health and mental health needs of active duty military personnel and veterans, as well as those of other […] 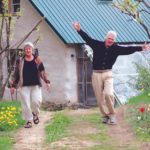 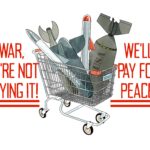 A new alternative fund that will be available to any U.S. Mennonite at their local church is being proposed at the biannual convention of the Mennonite Church USA in Kansas City on July 4. War tax resistance alternative funds began in the late 1960s as a way for resisters to pool the thousands of federal tax dollars resisted because of the Vietnam War. Alternative funds serve the following purposes: Hold resisted taxes in escrow until the government allows taxpayers to pay taxes without any of that money going to war (through, for example, the Peace Tax Fund Bill). Provide potential security of funds from seizure by the IRS. (Since all deposits are held in one common account under an organization’s […] 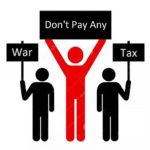 Picket Line Annual Report (For the Full Article by David Gross, including the detailed 1040: A Walkthrough click here.  Links to previous Picket Line articles can be accessed by  clicking on the “♦” symbols.) Tax Resistance Sixteen years ago, on 19 March 2003, the U.S. began its “shock and awe” attack on Iraq. For me, this was the last straw and so I started what I then called “an experiment” in tax resistance so that I would no longer feel as complicit.♦ My goal was to stop financially supporting the U.S. government. I hoped at first to do this legally by lowering my income below the federal income tax line, so I quit my job to start my own small business and I began […] 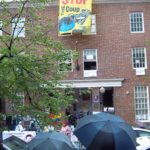 We had a delightful NWTRCC gathering in Washington, DC this past weekend. I want to start with a HUGE thank you to the Dorothy Day Catholic Worker, who hosted folks who needed beds, hosted some of our weekend activities, and helped many of us make it down to the Venezuelan Embassy after our business meeting on Sunday. Thanks also to those who helped with food. Here are some of the highlights, in my humble opinion: Friday evening was supposed to begin with a report back from Code Pink activist Paki Wieland on her recent trip to Iran. Paki and other activists have been staying at the Venezuelan Embassy since it was officially turned over to them when Venezuelan diplomats who […] 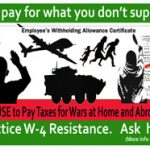 I did a presentation about war tax resistance before tax day to an antiwar section of the local DSA group, Democratic Socialists of America, a group that has grown like wildfire since the 2016 Bernie campaign. I gave a broad overview of the reasons, history and methods of war tax resistance, and we had a good amount of time for questions. I neglected to write up some notes during or after the session, but a few things that came up that still rattle around in my brain. There were definitely people in the room who were interested in war tax resistance, or tax resistance in general, for personal reasons — thus the invite to speak. But like many activists, they […] 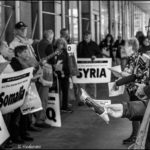 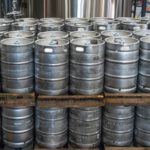 Tax Day in the United States is Monday April 15 in most states (April 17 in Maine & Massachusetts). So I thought a post on terrible taxes in history would be appropriate. Back in December, HistoryExtra.com published an article about ten terrible taxes. (HistoryExtra is the official website for BBC History Magazine and BBC World Histories Magazine.) One downside of the article from an American perspective is that all of the taxes listed were English-enforced, but it’s still interesting and has some parallels with American taxes today. Here are a few of the unpopular taxes from their list: (1) The poll tax became more common in England at the end of the fourteenth century. It charged a flat tax per […] 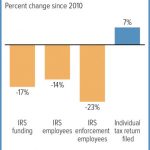 The poor, underfunded IRS has been ignoring me lately. I get the usual two or three letters a year asking for payment or threatening levies, but I’m not getting enough personal attention to write about my own case in a monthly blog. However, I do know some others who have the long arm of the government reaching into their pockets. On the one hand there’s less to fear from the IRS; on the other hand potential resisters still have to know about the risks. A longtime resister who lives on a low income but has tax debt is suffering with a salary levy now. Although she works very part-time as a therapist, the levy is taking something from each check, […]