For many anti-war folks, Tax Day has been a day to raise awareness that close to half of the US federal budget is spent on the military. Some have created penny polls around Tax Day to ask people how they would like to see their tax money spent. For those who resist paying taxes for war, Tax Day extends to all of the days of the year, but Tax Day often serves as a moment in time to assess what actions we are taking to create more equitable systems. Since the new Tax Day has been extended to July 15th, NWTRCC’s work organizing around Tax Day 2020 has required adaptability and offered more creative opportunities in this extended tax season. 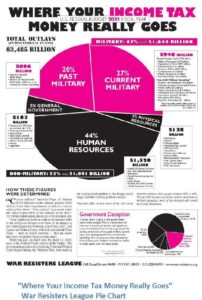 The COVID-19 pandemic continues to cause tremendous pain and suffering around the globe and in the United States. In early February when leadership at the federal level could have mitigated some of the loss of life and decreased suffering, the Trump administration was putting together a wish list.  NWTRCC wrote a blog Time is up for Business as Usual that gave insight into the priorities of the Trump administration’s proposed 2021 budget. One universal theme is cutting the safety net for people who lack the basic necessities of life as well as protections for the environment.

While so much has changed with Tax Day 2020, much has not for war tax redirectors. We will not be able to take the War Resisters League’s Pie Chart to the streets as in years past but we are well equipped in educating others of how money is currently spent and how we are redirecting our money and resources into our communities.  Here are some suggestions of actions you can take starting on April 15th, the day formerly known as Tax Day.

The beauty is that many of these actions can take place everyday. NWTRCC was established as a network to lend support to others who were redirecting their taxes away from war.  It is a good time to celebrate those that we catch courage from as Kathy Kelly often says. I think of the “one man revolution”that Ammon Hennacy lived. I think of Claire Grady who is scheduled to be sentenced for the Kings Bay Plowshare 7 in late May who stated at her trial- “Fear Less. Love More.”

In these extraordinary times it may seem that we are called to do extraordinary things. And we are. Fortunately for those who have chosen to live a simple life we know the richness of having networks of support. I recently came across notes from my first NWTRCC gathering and there was a quote from Dan Berrigan “a good peace movement starts small and gets smaller.”  It may seem like our efforts are like a drop in the ocean or a drop in the penny poll but our message is rippling out to those who hunger for hope and empowerment.