Never done a Penny Poll? This simple activity is one way to have more interaction with passers-by about government spending priorities. It challenges each of us to think about how tax dollars are being spent and how we would like them spent. 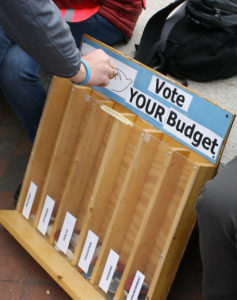 How do you do a Penny Poll?

The photos may give you more ideas on how to construct your very own Penny Poll. Use your imagination and the resources at hand. Also, see the blog for New York City’s Granny Peace Brigade and their “Ms.Gizmo” for their fancy set up and polling stories.

In Austin, Texas, our counter-recruitment group, Sustainable Options for Youth (SOY) always includes the Penny Poll in our “t-shirt challenge” when we table in the high schools.  We ask students to respond to a series of questions, such as “what are the 5 basic First Amendment freedoms?” or “where is your school mascot animal found in the wild, and what are some threats to its existence?” We ask them to find
certain countries on the globe and write down their ideas about preventing war.  There’s a Peace Wheel of Fortune and a chin-up bar, suggesting that peace takes strength, too.

We appreciate seeing how seriously most students approach the challenge. When they walk up to the Penny Poll, they deliberate carefully before distributing 10 pennies among the 5 jars. Over the last semester, in 7 school visits, 234 students voted for 30% of the federal budget to go toward Education, 24.5% for Health Care, 19% for the Environment, 14.8% for the Military and 11.7% for Humanitarian Aid. Lately, we’ve been tweeting the Penny Poll results to the schools’ twitter accounts as we tally up. During our last school visit, one student who unfolded the AFSC’s “One Minute for Peace” graph after she had voted in the Penny Poll said, “Nuclear Weapons? We don’t need those!” Kids should have a voice, and the Penny Poll is a great interactive exercise that can be used year-round.

People were given ten pennies to distribute in the way they would like to see their tax dollars spent. 58 people participated in the poll that lasted from 12–2pm (in addition to passing out literature). The following are the results of what people, who took the poll, would spend their money on: 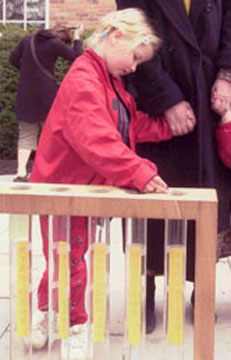 A child puts pennies into a penny poll in Princeton, New Jersey.

The Coalition for Peace Action conducted their annual penny poll in front form the Princeton post office from noon to 1:30. Each of 107 participants were given 10 pennies to distribute in 5 categories. The results were:

Photos from Other Cities 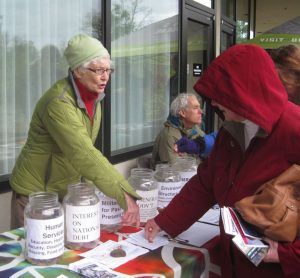 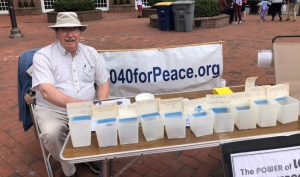 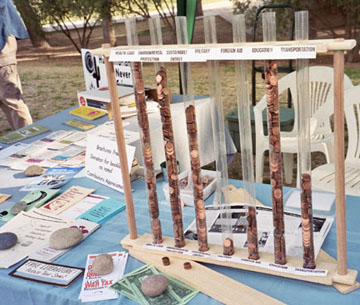 Readings on Money — See the “On Money” section, which includes: