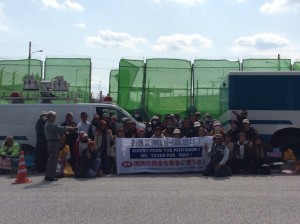 The US military has personnel in at least 175 countries, according to David Swanson in War is a Lie.

The US has at least 800 military facilities in other countries.

The US misinvests more on war than any other country. The Stockholm International Peace Research Institute estimated the US military budget for 2014 at $610 billion. (Other sources put this figure much higher, at over $1,000,000,000,000.) In comparison, Japan was the 9th biggest military spender, at $45.8 billion, and the Republic of Korea (South Korea) was 10th with $36.7 billion.

These figures make me wonder. If the US war profiteers prioritize war so highly and act so proud of it, why do they extract handouts from the many nations it occupies? Why doesn’t it pay for its own bases? And why do the citizens of Okinawa, Jeju, and other countries agree to pay for US war bases with their tax money? How can the people of the world stop paying for war and instead invest their common wealth in education, healthcare, and projects relating to the opportunities presented by climate change?

In the US and other countries, War Tax Resisters refuse to pay for war. We redirect our resources into more constructive programs and projects.

We are War Tax Resisters. We are happy to be standing in solidarity with you at this demonstration for peace in Gangjeong, peace in Okinawa, peace on the planet.

Peace be with you.