The Korean Navy is destroying Gangjeong Village  (current population around 2,000) and the surrounding area by building a base here. In terms of population, 7-8,000 soldiers and their families are expected in the community. Additionally, bartenders, tattoo artists, prostitutes, and others will be drawn to the area 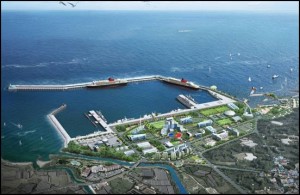 The base itself will accommodate U.S. warships such as Aegis destroyers, nuclear subs, and even aircraft carriers. Pinocchio is a popular character among the resisters here, who believe their government is lying to them (about lots of things, of course, but specifically to this post) about this base’s intended joint civilian- military use. The breathtaking propaganda poster shows a glowing facility with green grass and pristine-looking blue waters harboring 2 warships along with a cruise ship.

As U.S. documentary filmmaker Regis Tremblay (The Ghosts of Jeju)  said, “If that happens, it will be the first time in the world that a U.S. base shares space with tourists.” Regis was here for a week filming interviews and footage of the village for his next film, 11:57: Three Minutes to Midnight. This film will examine “the dual threats of nuclear Armageddon and climate change” and their connections to U.S. militarism and global capitalism. 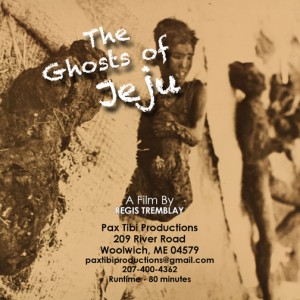 Regis is in the final stretch of an Asia-Pacific filming trip that will have taken him to Okinawa, Kyoto, Hiroshima, Jeju Island, the Marshall Islands, Guam, and Hawaii by the time he returns to Maine in September.

The Ghosts of Jeju and the connections between the history it documents and the current struggle against the Naval Base here will interest War tax resisters and anyone interested in the mis-investment of U.S. tax dollars in imperialism/war, the systematic destruction of life on earth. As Colonel Rothwell H. Brown said of his role on Jeju Island, “I’m not interested in the cause of the uprising. My mission is to crack down only.” And crack down he did. The estimate is that somewhere between 25,000-30,000 Jeju people (about 10% of the island’s population at the time) were killed by U.S.-controlled forces (police, soldiers, right-wing youth organizations) in what is known as the April 3 Incident or the April 3 Massacre, which occurred between March 1, 1947, and September 21, 1954. 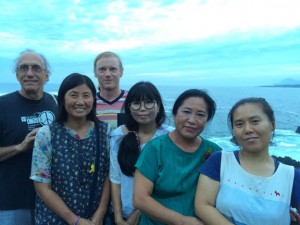 It was illegal to talk about April 3 until the mid-1990s.

And now the base is nearing completion. And the crackdown continues.

But Jeju is not alone.