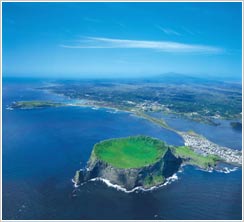 At one time, Professor Yang Yoon-Mo was the most influential film critic in Korea. His influence was felt in film festivals, academia, and media spanning the political spectrum. Since that time, he has changed course and devoted his life to the struggle against the nominally Korean naval base being constructed in Gangjeong village on the South Korean island of Jeju. He has vowed to continue this struggle until death.

Although the South Korean tax system puts the responsibility for collecting “tax obligations” on employers, making it difficult to resist in the way that many U.S. war tax resisters refuse to pay by simply not writing checks to the IRS, Professor Yang’s comments on the fraudulent fleecing of taxpayer money will sound familiar to most of us in the “Not in my name, Not without the possibility of participatory budgeting processes re: coerced investment of my small portion of commonwealth” crowd. 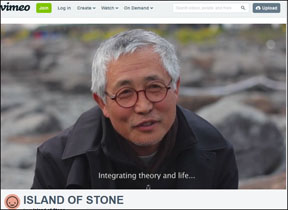 The short 2011 interview/film Island of Stone features an interview with Professor Yang followed by footage of a demonstration where he’s pulled out from under a construction vehicle he was blocking at the construction site in Gangjeong.

It begins on Gureombi, a unique and sacred smooth rock formation on an island composed largely of jagged lava, that’s been a central part of this village’s life for at least 500 years. (Gureombi has since been blasted and paved over to accommodate this base, the construction of which will enrich the Samsung Corporation, it has been reported. The base is significant for its proximity to China’s shipping lanes and is part of the “Asia Pivot” occurring under the Obama Administration.)

Prof. Yang in Island of Stone:

“The Navy, which is run with tax money from citizens, decided to build a naval base. At least a business explanation for the Gangjeong villagers, or a public hearing, should have been held. It was a one-way process without communication. The only reason for creating this naval base was in the name of “national defense”. The Navy plundered the village and plundered the farms….

That they did these things illegally and violently in order to build the naval base brings a complaint from me. To express my complaint, I have been staying in this vinyl house, struggling and resisting in order to stop their construction. My struggle is not about repulsion of the Navy or National Defense. If you are doing national business, follow a just and democratic process. In a democratic country one should proceed with justice, discuss together, and reach an agreement if it is needed. If it is impossible to reach an agreement, I wish they had a procedure to find alternative ways. Because that process didn’t happen, this is a struggle against the unjust construction of the naval base. This struggle is a basic citizen right, and it is civil duty to carry out that right against injustice and unfairness. “