Many of us got involved in war tax resistance because of nuclear weapons. For myself, I heard Dr. Helen Caldicott speak sometime back around 1980. She was passionate — and scary — about the dangers of nukes. The disaster at Three Mile Island led her to leave her medical career, become president of Physicians for Social Responsibility, and a leader in the peace movement. I appreciated that she spoke out about the connections between nuclear power and nuclear weapons, and now she has the example of Fukushima to continue her loud call for “no nukes.” 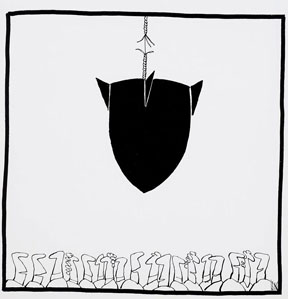 When I got active in the peace movement, nuclear weapons and fear of nuclear war were pressing issues of the day. The arms race between the U.S. and the Soviet Union was hot. President Reagan boosted the military budget, placed Pershing missiles in Europe, and, rather than disarm, committed billions of taxpayer dollars to a boondoggle missile defense system. The issue was so big that one million people marched and rallied against nuclear weapons in New York City in June 1982.  It was so mainstream that in November1983, ABC television broadcast a film called The Day After that showed war in Europe escalating into nuclear war between the U.S. and Soviet Union.

Today many activists still give attention to the nuclear issue, but it’s not front and center — even after Fukushima. In 2012, three nuclear disarmament activists  got widespread attention when they managed to enter what was supposed to be a very secure place: Y12 Nuclear Weapons Complex in Oak Ridge, Tennessee. They managed to get through four fences and walk for two hours before hammering on the cornerstone of the newly built Highly-Enriched Uranium Manufacturing Facility (HEUMF), splashing human blood and leaving spray painted calls to disarm on the recent construction.

The federal government sent them to prison rather than heed their call to get rid of these weapons. You can learn more and find out how to write them on The Nuclear Resister website.

Anyway, all of this is on my mind because I was just working on the “Where Your Income Tax Money Goes” flyer for the War Resisters League (the new one should be posted online soon). As you may recall, President Obama received the Nobel Peace Prize in 2009 because he gave a wonderful speech in Prague: “I state clearly and with conviction America’s commitment to seek the peace and security of a world without nuclear weapons.”

That same Nobel Peace Prize president proudly released the 2016 budget with $348 billion ($95 million a day) budgeted through 2024 to maintain and upgrade the U.S. stockpile of nuclear weapons and delivery systems, including new bombers, submarines, intercontinental ballistic missiles, and increased produc­tion of nuclear materials.

The nuclear issue is still a damn good reason for war tax resistance!

P.S. Join us in the streets at the end of April for the Mobilization for a Nuclear-Free, Peaceful, Just, and Sustainable World while the U.N. talks and talks and talks during the Nuclear Nonproliferation Treaty Review Conference.