Today, January 26, in Philadelphia the Quaker Action Team honors five elders, including our friend and associate Robin Harper. NWTRCC sent this tribute in his honor: 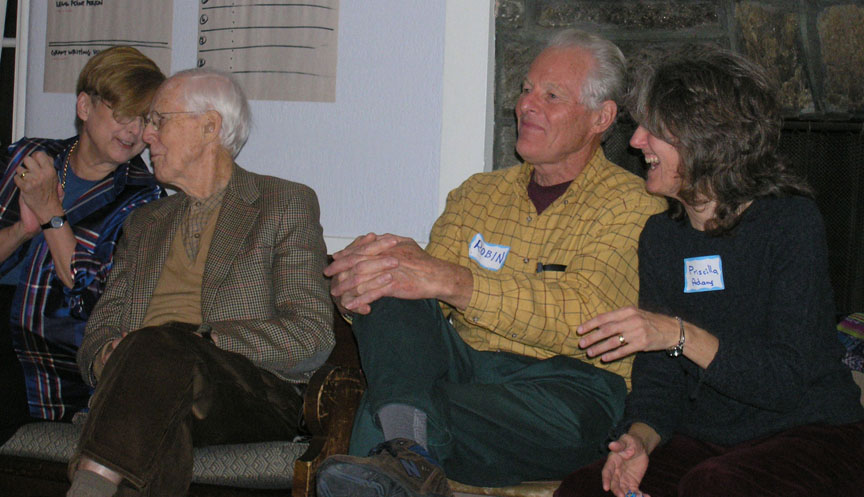 Speaking truth to power has been the undercurrent of Robin Harper’s years as a war tax resister. Since Robin began his resistance in 1958, he has had many opportunities to present his deeply held convictions to IRS agents, federal court judges, tax court judges, along with friends, co-resisters, and family members. Of one four-hour meeting with IRS agents Robin said, “We established complete agreement on the figures and complete disagreement that I should pay the IRS.”

We wrote that in December 2004 after a meeting at Swarthmore College at which Robin and Wallace Collett were honored, but Robin Harper cannot receive enough honors. We are glad to send this tribute to the January 26 Earth Quaker Action Team event.

While based in the Quaker community and an important member of the former Working Group on Conscience, Militarism, and War Tax Concerns at Philadelphia Yearly Meeting, Robin has also been a supporter of all the permutations of the national war tax resistance network over the decades. He has been a role model for so many of us and has generously provided his expertise and support to NWTRCC since its founding in 1982.
In the history of war tax resistance Robin made many important contributions, but he was the first to successfully use the Fifth Amendment to the U.S. Constitution in Federal District Court in 1975. “No person shall be… compelled in any criminal case to be a witness against himself”) was the basis for Robin’s argument that to turn over records to the IRS might aid their potential prosecution of the resister. This was an important case and one that has held precedent ever since.

Another NWTRCC newsletter from 1998 presents Robin’s account of another meeting with the IRS: “Purpose of conference — to collect the full amount of the delinquent tax for years 1987-1996. Bring a check for $54,969.28.” Robin went to the meeting with a chart, measuring 2½ by 4½ feet, detailing his alternative federal income tax payments to nearly one hundred organizations. He also described the history and substance of the Religious Freedom Peace Tax Fund bill, and the revenue officer commented, “Congress should have passed it 25 years ago.” After this meeting Robin wrote, “Long ago I lost my fear of the IRS: all they want is money, which they have not yet succeeded in collecting from me, while I am acting to preserve my religious and moral integrity, which is priceless.”  (Click here for the full story — scroll down to “WTR Stories”)

Thank you, Robin, for your religious and moral integrity, which has had a value beyond reckoning for war tax resisters and all those who work for a world of peace and justice today.