“There is such positive work going on in the community. It feels really great to be able to redirect our resisted war taxes to support projects that meet essential human needs and challenge injustice—especially those that are led by the same constituencies that are being served.”

Some of the redirections are from organized alternative funds, others come from groups of individuals who pool their resisted war taxes each year and then decide collectively on grants.

Along with the group redirections, we know that individual war tax resisters around the country make their own redirection choice. We’ll make note of these when individuals send them in. 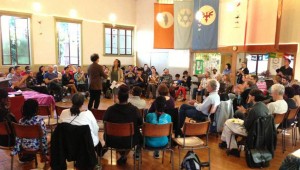 Fund member Jon Marley says, “We are excited to support such a wide array of groups doing excellent work in Northern California around social justice and peace. With so many families and neighborhoods in need of help, this is what our tax dollars should be going for, not endless war sponsored by the U.S. government.”

“A Time to Speak up for New Budget Priorities” was the title of the 2015 Tax Day Forum for A Budget for All, which was held April 11 at the Old South Church in Boston. The event in support of the Congressional Progressive Caucus’ People’s Budget, provided a community platform on how taxpayers’ money should be spent and featured remarks by Mel King, Grace Ross, Jimmy Tingle, Barbara Madeloni, Jamie Eldridge, Jill Stein, and 26 other speakers representing a wide range of Massachusetts labor, community, faith, and political leaders. One of those other speakers announced a war tax redirection:

Hi, my name is Mary Regan, and I have been a war tax resister since 1983, when I decided that I could not in good conscience participate in killing and destruction funded with our tax dollars. I pay about half of my federal taxes because about half of the US discretionary budget goes to pay for past, current or future killing and war.

New England War Tax Resistance, a group of Boston area people who refuse to pay some or all of their federal income taxes in order to oppose the funding for wars, weapons, and killing, is proud to announce the donation of $4,500 to local organizations working for a more just and peaceful society.

This donation, money not paid to the federal government, is redirected to efforts that are seen by our members as a better use of our common fund than the military budget.

Organizations that are the beneficiaries of these funds are:

The Prison Birth Project, which works with mothers and trans parents currently and formerly incarcerated in women’s jails to increase access to reproductive choice and care in jail. In 2014, the women of PBP successfully lobbied to end the use of shackles on women in labor in Massachusetts. Now they are working to ensure this law is enforced and that women are allowed to pump breast milk for their children.

The Massachusetts Alliance Against Predatory Lending to support its Bring the Wealth Home campaign to reverse foreclosure and restore as much as possible of the $12 Billion in foreclosure pillaged from communities of color.

Association of Haitian Women in Boston to support an organizer to work with members on Comprehensive immigration policy in the US, and on human rights violations of Haitians in the Dominican Republic.

The City School to build bridges across differences and mentor young people to become life-long community leaders for social justice.

The Youth Justice & Power Union to do leadership development and base-building with low income young people of color to fight for racial, economic, queer and gender justice in the city of Boston

Watch a 21-minute video from the program 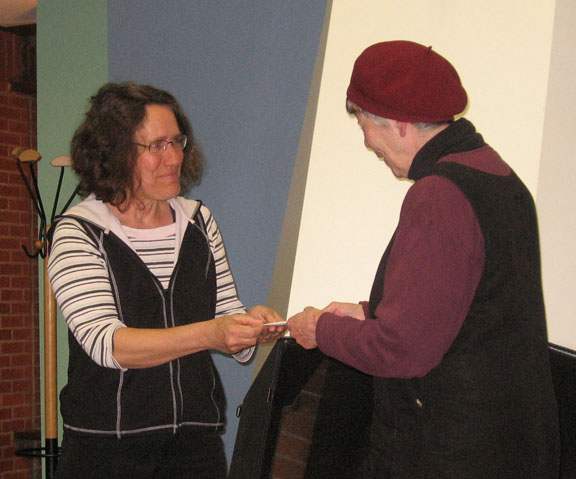 To celebrate tax day in Portland, we had our annual Redirection program on Monday, April 13, at the Augustana Lutheran Church. Members of the group pool together their resisted taxes each year and jointly decide on the groups receiving grants.

We “re-routed” thousands of dollars to 5 different groups including St. Lukes Veteran’s Bridge Fund, which helps returning vets get on their feet financially (something the federal government fails to do). Overall, another successful tax day, raising awareness of where our tax dollars go, and re-routing some of that money!

—Photo and report by Kima Garrison 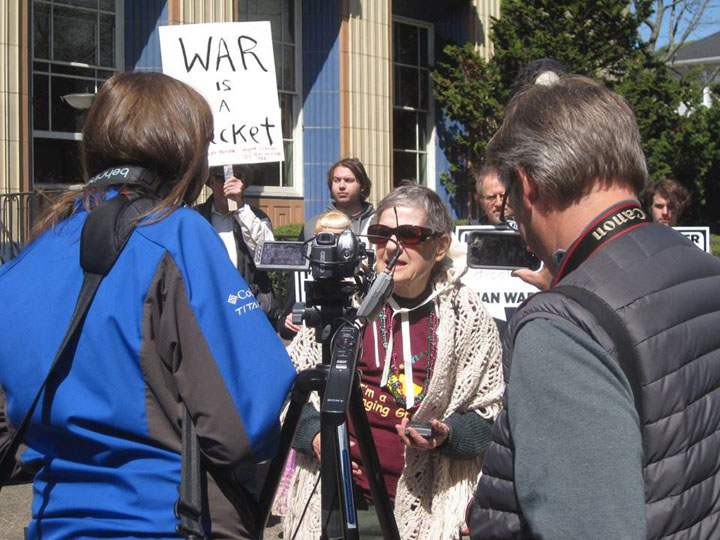 Peg Morton talking with the media on tax day. Photo by Jain Elliott.

A tax day rally included presentations of redirected taxes, written as personal checks, to about 25 groups, many of whom came to receive them. Wellsprings Friends School was one of the recipients, and a group of students attended the rally. One student sang a solo about homelessness. We donated a total of $2092.50 this year.

“A number of participants in our group and in the surrounding community refuse to pay some or all of our federal income taxes and telephone federal excise taxes each year. Others pay under protest or legally do not owe any income tax. We redirect that which we do not pay to the federal government to causes that support dignified lives of people, here in the United States and around the world, and that support the life of the planet. When we do pay under protest we often donate similarly.”

The above statement from the group is included with each grant. More photos from their tax day action are on our reports page.

First Friends of New Jersey and New York – Non-legal services to help destitute detainees assemble documentation for their cases, including the use of telephone calls, medical witness and translation services. -$1,000

Veterans for Peace Chapter 115, Red Wing, MN – To assist VFP115 in bring speakers to the annual Peacestock 2014 event, including the legal counsel to Edward Snowdon who will be the keynote speaker. – $500

Dreams In Deed International, Erbil, Iraq – food, clothing, and medicine for a group of about 700 refugees who share a small abandoned market area near the city of Erbil, Iraq – refugees first from the war in Iraq and then the war in Syria. – $1,500

Veterans for Peace, Chapter 160, Da Nang Viet Nam – To establish an emergency fund to provide housing repair, medical assistance and food to Vietnamese Victims of Agent Orange and their families. – $1,000

Coalition Against Police Crimes and Repression, St. Louis, MO – to build district level organizing circles to advocate for a St. Louis City Civilian Oversight Board (COB), to identify viable COB candidates and to educate and equip citizens to create a community accountable COB with an accessible, fair and transparent
complaint process. – $1,000

“We redirect our taxes because they are neither the Pentagon’s nor ours.  They are a portion of our resources that belong to the common good.  Redirection is our version of Gandhi’s constructive program.  It is the fruit of our deeply rooted resistance.”