Divest from the Pentagon, Invest in People

War tax resisters and campaigners against high military spending participated in rallies, vigils, redirection ceremonies and organized leafleting and penny polls around tax day 2016. In addition, actions took place around the world for the Global Campaign on Military Spending.

See the links under our media menu for 2016 tax season articles and recorded interviews and podcasts.

Anne Barron reports: “Our 1st annual war tax redirection in San Diego! So honored to turn my war $ to peace work. Along with the Southern California War Tax Alternative Fund, we redirected $8,200 from war to these amazing people: Peace Resource Center, tiny shelters/Amikas, Food Not Bombs, Overpass Light Brigade, UHURU, and alternatives to violence. We got word that the police were on their way to our war tax ceremony in front of the spiffy new downtown library. Apparently they came 2 ‘check’ our tiny shelter! Why? Because these simple solutions by communities 4 the community threatens their power? So we quickly moved the controversial shelter to safety down the sidewalk.”  The press conference was at noon on Friday, April 15. War tax resisters and peace activists caught the attention of commuters with the Overpass Light Brigade on the evening of April 15. 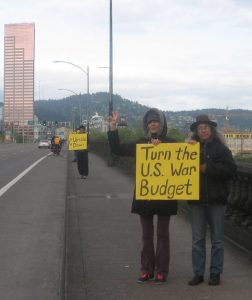 Amazing organizer John Grueschow (left) and a group of us held signs on tax day rush hour on several bridges in Portland (it wasn’t raining!).  Most responses were really positive with friendly waves and thumbs up, but I did see a handful of people with negative responses—I was holding a sign that said “Peace Not War”.  I’m not sure how this message could have such a strong negative reaction from people, but I guess they weren’t from Portland!

Our redirection program was another success, giving away over $6,000 to 6 different local groups, including Books to Prisoners, Food Not Bombs, and the Returning Vets Project.

Left, Pam Allee and Ann Huntwork at the redirection ceremony.

—Report and photos by Kima Garrison 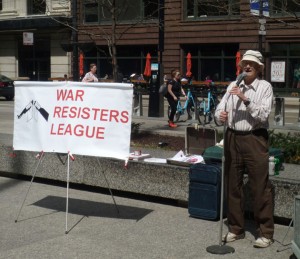 “I figure IRS is going to wonder why there was a decline in tax returns from Chicago,” says Charles.

In addition, Rosalie Riegle spoke in a forum at the Third Unitarian Church in Chicago on April 17, along with a slide show with resources as well as photos of storied tax resisters. She says, “I used the pie chart as a handout. There were several good questions and an interesting discussion, with one member of the audience remembering Karl Meyer‘s work on tax resistance when he was in Chicago.”

On Friday, April 15th, war tax resisters, Raging Grannies, members of the Community Alliance of Lane County, and friends gathered at the downtown post office for a rally, penny poll, and announcement of war tax redirection. Sue Barnhart announced the redirection of tax dollars to groups including 350.org, Stand for Children, the local chapter of the NAACP, and Occupy Medical.

All photos by Jain Elliot. See her photo album from the event, shared on NWTRCC‘s Facebook group page. 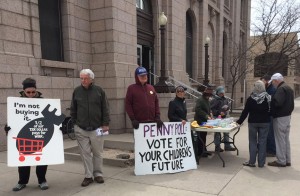 Members of the Bijou Community were out at the post office in Colorado Springs on April 15.

Carol Coney (left) displays her banner at IRS headquarters on April 15. She and other war tax resisters were in D.C. for the Democracy Spring actions to “get money out of politics.” We held a vigil at the IRS before joining up with a rally for D.C. statehood and a march by that group to the Capitol Building where Democracy Spring was holding a rally followed by a sit-in on the Capitol steps. 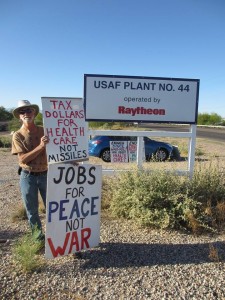 Tax dollars are needed for health care and education, not more weapons and war!! Nuclear Resister 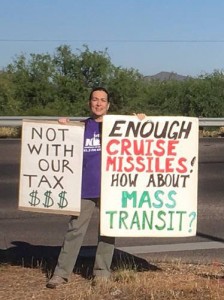 Read the full report from Tax Day in Maine

The rally at Portland’s Congress Square Park on April 19, the last day to final in Maine due to a holiday, got coverage on the Maine National Public Radio website, “Maine Activists Protest Spending on U.S. Nuclear Overhaul,” and on WCHS Channel 6, “Mainers Protest Military Spending on Tax Day.” 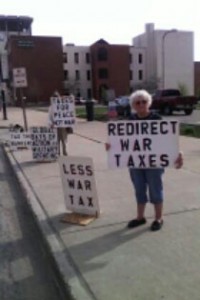 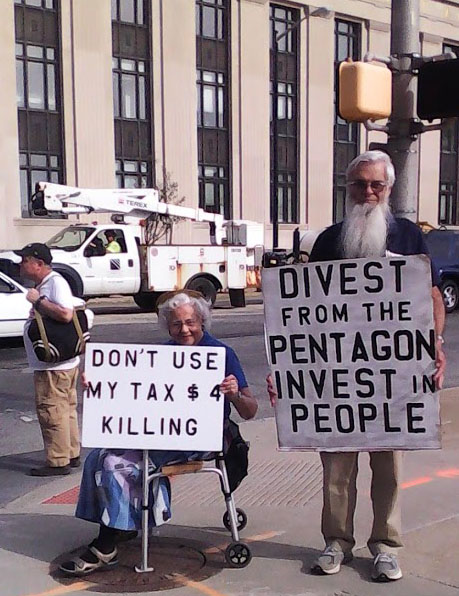 On a warm, sunny afternoon, war tax resisters and supporters displayed their messages on signs near the South Bend Federal Building on tax day. The five humans had help from surrogate sign holders (right).

Was there a Tax Day action in your community? Email your report, with or without photos, to NWTRCC.