Almost from the moment that Biden assumed the presidency, he has been singing in unison with IRS Commissioner Charles Rettig about the need to increase funding to the IRS by $80 billion.

Originally, the proposed funding had some Republican support, but that soon soured and the future of the funding proposal seemed dead.

All that changed when Biden and congressional Democrats saw an opening to quickly pass the Inflation Reduction Act (IRA). The IRS funding would probably not had passed as a solo bill, but it found life after being added to the IRA. Last Sunday, Senate Democrats passed the IRA and the House is expected to pass it later this week.

What’s in the Bill?

The bill will increase the IRS budget by almost $80 billion over 10 years… so a yearly increase of about $8 billion. The current yearly IRS budget is $12.6 billion, so this is a yearly increase of over 60%. That is substantial. After decades of inadequate funding, the IRS will be flush with funds. In terms of people power, this bill will add 87,000 employees to the IRS over a ten-year period—roughly doubling their numbers.

Half of the new funding will be dedicated to enforcement. From the start, supporters emphasized that enforcement will focus on high-income individuals, but low to mid-income households will surely feel the repercussions of this beefed-up enforcement. At the end of the 2010, the IRS wrote off $14.6 billion of taxes due as it expired after reaching the 10-year-statute of limitations. At the end of 2019, $34.2 billion was written off. The IRS expects that increased enforcement will increase taxes collected by over $200 billion during the next 10 years. 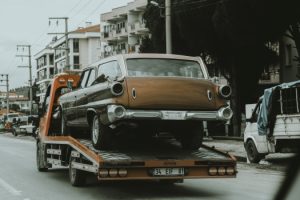 It is unlikely that the larger IRS budget will lead to more property confiscations for war tax resisters. Photo by Sami Aksu from Pexels.

The remainder will be used for operations, tax-payer services, and technology. The IRS has an embarrassing back-log of paper returns to process, not enough people to answer the phone, and an antiquated computer system. I am sure that these three items will be priorities for the remainder of the funds.

Nothing in the bill indicates that the IRS will increase property confiscations for items such as cars and homes. The decrease in confiscations was largely due to a change in philosophy in the late 1990s. But as the IRS slowly rebuilds its enforcement ranks, we will likely see an increase in wage garnishments, bank levies, retirement fund levies, W-4 lock-in letters, and notices of public liens filed at local courthouses.

Of course, before they can take action on recent years for WTR paper filers, they will have to actually process their returns! As always, the NWTRCC office will stay abreast of these matters and keep you up to date.