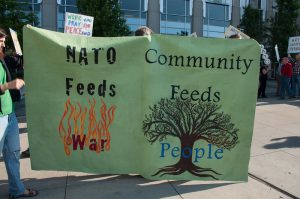 Image of NATO protest in Chicago from Steve Rhodes on Flickr.

The revolving doors of the Pentagon opened up this week to the 8 largest U.S. weapons manufacturers and the war strategists to come to the table. They were making plans  for a war in Ukraine that may continue for years. It was as if a dream that had been brewing for years appeared to be coming true. The obscenity of military spending in the U.S., feverishly gobbling up over half of federal income taxes for decades has become even more perverse in the last few years as the pandemic has magnified the denial of the resources for people’s needs and our home in which we depend.

In February 2020, the U.S. Army published an article Interoperability: Embrace it or Fail! that was cowritten by leaders in Australian, French, British and U.S. militaries. The paper argues for the need to have weapon systems that would be standardized amongst allied nations and ends with a future scenario. “It is now 2035 and you find yourself deployed to a theater within the U.S. Indo-Pacific Command general area of operations where tensions are high. Your previous experience in Europe highlighted a disjointed approach towards sustainment and logistics yielding sub-optimal solutions. You remain hopeful that NATO and ABCANZ (America, Britain, Canada, Australia, New Zealand) nations have learned from previous challenges and are better prepared for LSCO (Large Scale Combat Operations) in your new theater.” 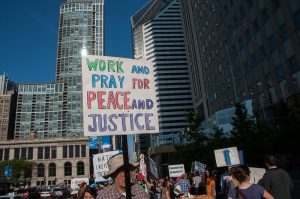 In another part of the document it speaks of gauging levels of ambition: “Interoperability requires nations to spend money, take risk and cede sovereignty in order to increase legitimacy, cohesion, mass and agility.” That seemed to have been the previous U.S. presidential administrations continued refrain to NATO members that they needed to pay more of their GDP towards defense spending.

Following World War II, many western European countries’ military budgets invested more of their taxes or collective resources towards the needs of their populations and less on military spending. Quite dramatically the world has witnessed a reversal of that trend with Germany making a dramatic jump from #7 in military spending to #3 and reversing its ban on exporting weapons. In the article “Waltzing to Armageddon,” Chris Hedges points out how U.S. military spending will help recruit Eastern European nations to join NATO and will fast track conversion to NATO weapons and technology. Long standing neutral nations of Sweden and Finland are considering joining NATO–adding additional impetus for a global war. 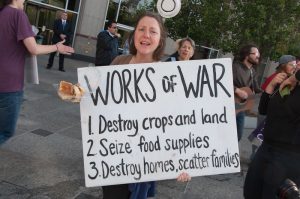 Image from Catholic Worker protest of NATO in Chicago.

While some may have notions of U.S. exports being McDonalds and Levis, the number 1 export of the U.S. has long been weapons. Now it appears as if we are attempting to convince our allies to adopt the McDonaldization of our militaries and create standard systems, munitions, and fuels. The only country to use nuclear weapons is calling for new standardization and efficiencies of delivering death.

It was disheartening to begin the week with news that the U.S. was going to vastly expand the types of weapons it was sending to Ukraine. It seems like the response to death and destruction is to send more weapons and money even after the Biden administration has already spent $2.4 billion on Ukraine since taking office. The alarm bells go off when Defense News reports that U.S. lawmakers proposal of $13.6 billion for weapons and training “was like putting Biden’s proposal on steroids.” 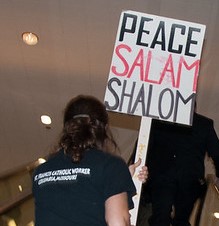 The wicked irony of escalating a war when many are celebrating Passover, Ramadan, and Holy Week. All the rituals are marked by personal reflection and communal coming together to share nourishment. The rituals of war tax resisters coming together for Tax Day with War Resister’s League pie charts to educate about U.S. military spending have been scaled back during the pandemic. The last “regular” Tax Day in 2019 coincided with holy week yet the events of the world have changed us all. What has not changed in these 2 years and has only increased is the amount of U.S. taxpayer money going towards military spending.

While some have questioned the increasing amounts of our collective resources going towards the Pentagon especially with the removal of troops in Afghanistan after 20 years and the lack of resources during the pandemic, war fever has been catching and spreading the world over, trying to rob us of our money, “others” lives and our collective imaginations.

Catholic Worker preform works of mercy as part of NATO and works of war protest.

Many will continue to be out in coming days to reclaim our imaginings for another world that does not promote or fund the slaughter of innocents. Go public in your opposition of paying for war by signing NWTRCC’s sign on statement, find inspiration from others taking action with the newly formed War Industry Resisters Network that are encouraging actions at places that profit from war around Tax Day to Earth Day and let us know of actions that you take so we can share them with NWTRCC and the annual Tax Day Report. Know that everyday is a great day to speak out about military spending and that there is a vast worldwide network of others who share your concerns!

2 thoughts on “Pentagon Spending: Efficient at Destroying but Inoperable for Healing Our World”