In recent days, an increased number of military planes have been flying over the US and targeting cities often in clusters to show appreciation to ‘front line workers.’  The Pentagon cooked up the scheme of ‘Operation America Strong’ to mobilize the military in what some refer to as the ‘war on the corona virus.’  The operation was to honor the sacrifices of health care workers who have faced new challenges in their profession in caring for those with COVID-19.  The risks to their lives have increased as the availability of PPE (Personal Protection Equipment) has decreased.

It seems that the US government has passed the buck in its most basic responsibility to protect its citizens.  The federal government missed the opportunity to prepare for and purchase equipment at the beginning of the pandemic.  By trying to save money and downplay the severity of the crisis, they missed a crucial opportunity.  Later they stated that it was the states’ responsibility to purchase the items. Finally, they resorted to their tried and true catch all phrase used to justify not providing the most basic of human needs- that we just don’t have the resources.

The same weapons platforms that have bombed civilians across the world were sent to fly over hospitals in the US that cannot even provide health care workers with masks that should cost $1.27.  The most expensive bomber was the nuclear weapons capable B2 Stealth Bomber flying out of Whiteman Air Force base in Missouri at $122,311.00 per hour (in 2017 estimates.)  It seems that no area of the US has been spared these displays of affection with many of the targeted cities roped together just as would be the case with a nuclear bomb or a flying mission to destroy multiple targets.  A senior US military official speaking on the condition of anonymity told the Washington Post “This is just a sincere thank-you. It’s one way to acknowledge those pitching in.”

While the military had stated in their press release that they wanted “to thank first responders,essential personnel, and military service members as we collectively battle the spread of COVID-19” it seems rather insincere to thank themselves; more as a way of justifying that almost half of US taxpayer monies go to warfare. The US military didn’t seem to get the memo or want to acknowledge that UN Ceasefire Defines War As a Non-Essential Activity  In March, UN Secretary General Antonio called for a world wide end of armed conflict during the Covid- 19 pandemic as well as an end to economic warfare. More than 70 nations signed onto the statement.  The United States blocked the vote before the UN.

Meanwhile the New York Times recently had a piece on homelessness, America’s Cities Could House Everyone If They Chose To. Towards the end it concluded “the nation’s homeless population could be housed for less than the price of one aircraft carrier.” That seems to bear repeating- that for LESS than one military expenditure all of the people living on the streets of the cities that the bomber jets are flying over could have homes. Imagine those 13 billion dollars used to meet basic human needs.

There has been a proposal to replicate the ‘Salute to America’ military parade on July 4th 2020 despite concerns over corona virus. This year that would be before Tax Day. Increasingly, people are becoming more aware of the catastrophic funding priorities in the US and the deadly consequences. 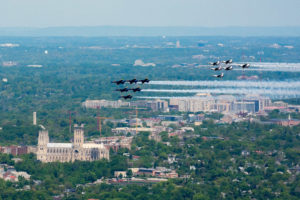 PS It doesn’t seem that this is the first time this tactic has been used.-It was also used during WWI and the pandemic of 1918.

4 thoughts on “Grounded…or flying by the seat of our pants?”