Like many, I awoke Monday morning with anticipation for Tax Day. My excitement was related to thinking of the many throughout the US who would be resisting giving money to pay for war and raising the issue of bloated military spending to the general public through leafleting, holding vigils and marches.  NWTRCC had been busy in the lead up to April 15, sending out copies of the War Resisters League’s annual Pie Chart and information about how to resist paying taxes for war with packets to communities gathering on this day. Additional posts were made on social media, especially with tweets of the many ways people were refusing to pay taxes for war.  Lists of communities taking action were compiled and shared on our webpage as well as a press statement.

Reports came in of Tax Day actions that took place from Belfast, Maine to San Diego, California. Rain or shine, members of NWTRCC’s network  were gathering to raise awareness about the impact of military spending and its impact upon our communities and environment.  Many of the actions were in collaboration with a variety of organizations to shed light on the communities most impacted by lack of tax monies.  Anne Barron spoke about war tax at the Truth and Poverty tour with the Poor People’s Campaign: A National Call for Moral Revival in San Diego.  Here is a video of the gathering. 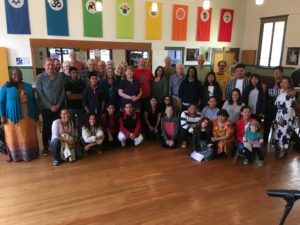 Redirection ceremonies were held in some communities including Berkeley, CA. The Northern California People’s Life Fund celebrated Tax Day with a granting ceremony in which they distributed $16,000 in redirected tax monies to 12 organizations. The community then celebrated their time together with a potluck. Susan Quinlan, an organizer of events in the Bay Area also reported Jim Best voluntarily distributing money to the local indigenous land trust to acknowledge living on stolen land. It was a response to Native Americans for a ‘tax on the land’.

Penny polls were conducted in Chicago, Colorado Springs and St, Louis to engage with the public of where they would like to see their tax monies spent. The first person engaged in St. Louis with information of how federal taxes were spent asked “Are we going to be voting on this?” He was encouraged to participate in the poll to indicate where he would like his money invested. 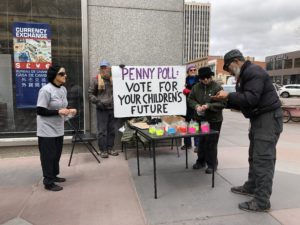 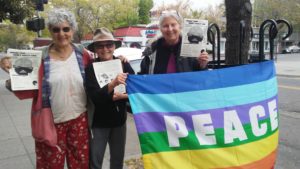 In a sort of marathon, Chris Nelson reported that over 400 leaflets in close to 7 hours in Chico, CA. Like many committed War Tax Resisters, she braved the elements, in this case the rain, to share information with the public to raise awareness. Gathered with others, Chris was happily celebrating her  39th year as a WTR.  It is for this reason that many of us in NWTRCC feel that Tax Day is like a Holy Day, a day to celebrate our liberation and to gather with those who share our desire to invest more resources to our communities to support human needs, not death and destruction throughout the world.  This year Tax Day was the beginning of the Christian “holy week” and Jewish Passover.

Gathering in St. Louis, MO including XR (it was the first Tax Day action for most of the group) 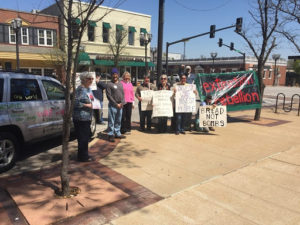 Tax Day was also the start of a week long world-wide call to action from the Extinction Rebellion. XR is an international movement that uses nonviolent civil disobedience to achieve radical change in order to minimize the risk of human extinction and ecological collapse.  NWTRCC has been writing more about the impact of military spending on the environment in recent years. You can read Environment, Taxes and War with links to fliers to hand out at NWTRCC’s website as well as a statement to the IRS from David and Jan Hartsough this year. 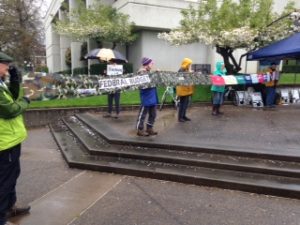 It seems as though the events in Eugene, OR  captured the many themes of Tax Day 2019.  A combination of both new and old, what has been and what is to come.  Sue Barnhart shared the timeline of events-

– 3:00pm Gather in the courtyard of the old federal building

– 3:15pm Hand deliver a copy of the tax protest letter to the Eugene IRS office.

– 3:20pm Michael Carrigan of the Community Alliance of Lane County will introduce speakers and the activist group, Planet vs Pentagon.

– 3:40pm Susan Cundiff with Women’s Action for New Directions (WAND) will break down the U.S. budget describing where out tax dollars go and how to protest strategies.

– 4:00pm Valve Turner and Extinction Rebellion (XR) organizer, Leonard Higgins will read a letter sent to the IRS, Oregon congressional delegates and others. He will briefly describe the XR-US and international movement..

– 4:10 Sue Barnhart  from Taxes for Peace Not War will talk about war tax resistance.

– 4:20pm Susan Macomson with Planet vs. Pentagon will talk about the work of their new group.

– 4:30pm March to the New Federal building to hand deliver copies of the letter to Oregon Delegates.

– 5:00pm Reading of the XR Declaration of Rebellion

Extinction Rebellion in Eugene OR 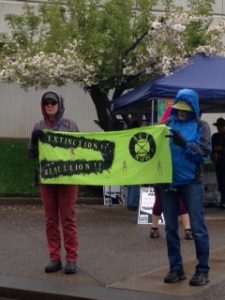 But we in NWTRCC know that the protesting of war taxes doesn’t end on Tax Day and that not everyone who protests paying taxes for war participates in Tax Day actions. It is fitting that Tax Day is near the start of Spring for often the work that we do is like planting seeds, sharing information, inviting others to join us in what for many is a path of liberation and resistance.

The May Gathering of NWTRCC will be in DC in a couple of weeks. You can see the list of events here. There is a link to the Virtual Meeting if you are not able to attend.  We look forward to discussing Tax Day Actions in 2019 and preparing for Tax Day 2020. It’s never too early to start planning. We’d love to hear any reflections from you about Tax Day.