Refusing to pay taxes to avoid complicity in state preparations to commit genocide with nuclear weapons, long time British war tax resister Roger Franklin was sentenced to 28 days in Gloucester Prison (and a further 21 days in 1996). His run-ins with the tax collectors also led to bankruptcy proceedings against him. (From NWTRCC’s History pages, 1995) 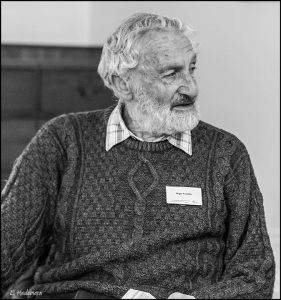 Roger Franklin at the 2008 conference. Photo by Ed Hedemann.

One of those chance encounters on the internet led me to an obituary of Roger in The Guardian, and another one on the CND Salisbury website. He died at age 93 just over a year ago now. This got me to thinking about the 2008 International Gathering of War Tax Resistance and Peace Tax Campaigns in Manchester, England, where I had the pleasure of meeting Roger and feeling very humbled by his acts of creative noncooperation with governments that perpetuate war.

In the 1970s Roger had purchased a home and 17 acres of land he named Tickmorend and declared it a nuclear free zone. In 2005, he increased his independence from the state and announced “The Republic of Tickmorend” or “Tickmorend Free Space” in response to “the madness of governments”. “I’m no longer implicated in aggressive wars, aggressive economics and nuclear insanity…. The state is a protection racket, which doesn’t protect you. It endangers you even more.”

The obituary links will tell you more about him. I also enjoyed reading about his run-in with the law when he refused the census in Britain in 2012 because it was being carried out by the “war machine corporation” Lockheed Martin. You can read his letters to the court here.

NWTRCC’s recent gathering included presentations about tax refusal in Spain and Britain with mention of the differences between refusing taxes in the U.S. and other countries. Most countries don’t have the “voluntary” filing like we do here, so in that way we are lucky to be able to make choices about whether to pay and how much to pay. But I was sorry to hear that the Money Rebellion campaign in Britain, which is focused on climate issues, had not been able to make contact with war tax resisters in that country and was not yet connecting the issues of war and the climate crisis.

Conscience – Taxes for Peace Not War is active in Britain, although they seem to have drifted more to promotion of non-military security and legislative campaigns. Nevertheless, they still promote some war tax resistance, and their website features a letter to Inland Revenue from Robin Brookes, who helped organize that 2008 Manchester conference. Robin says in his letter,

“I have wondered, on a purely personal level, whether I can continue to hold out in the face of accumulating interest and fines, but then I see that our government would not be party to the UN talks on making nuclear weapons illegal. …I have to continue to act under conscience.”

We can often feel alone in our war tax refusal, so it is heartening to remember that wherever and whenever there are taxes collected for war, there will always be some stubborn, brave, and inspiring individuals who will resist and refuse to cooperate no matter the consequences. Always.