NWTRCC held its fourth online conference the weekend of 5 – 7 November 2021. About 50 people attended some portion of the conference, which began the evening of Friday November 5 with a social hour. For the social hour, we broke out twice into random groups of five or six people for 23 minutes. It was chance for old friends to chat, but also to meet new friends. 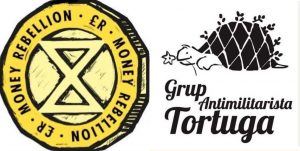 For this conference, we really took advantage of its online nature by hosting a Saturday morning panel with tax resisters from Europe.  The first session was a “Panel on Tax Resistance with Money Rebellion and Grup Antimilitarista Tortuga,” with author Jane Rogers and biologist Alex Penson of Extinction Rebellion UK, and Cuti of Grup Antimilitarista Tortuga in Spain.

Cuti spoke first and explained how their war tax resistance group grew from a movement of folks protesting compulsory military service in the 1990s. Grup Antimilitarista Tortuga collaborates with environmentalists and labor groups in Spain and also with War Resisters International. Their war tax resistance campaign is called, “Fiscal Objection to Military Spending,” and they object to €1,000 per person each year being dedicated from Spain’s federal budget to military spending, which is roughly 40% of their federal budget. Their study of Spain’s federal budget has revealed that Spain’s actual military spending is four times greater than the government admits in its summary of the budget. (This work is similar to the pie chart created by the War Resisters League in the U.S., which reveal how much the U.S. actually dedicates to military spending.) Although many collectives support their war tax resistance campaign, the actual number of resisters is about 400 people, who redirect about €25,000 each year to over 100 social projects.

Jane Rogers spoke next, sharing the beginnings of Extinction Rebellion and its Money Rebellion campaign. Extinction Rebellion (XR) began as a nonviolent direct action movement on 31 October 2018 as a response to the climate crisis. They have three demands: (1) the government should declare a climate emergency, (2) zero carbon emissions by 2025, and (3) the creation of a citizen’s assembly to direct climate policy. Money Rebellion began earlier this year to address the massive financial resources being poured into the fossil-fuel industry. Money Rebellion targets “dirty banks” and advocates withholding 3% of one’s income tax and council tax. They are promoting the withholding of 3% because this percentage of England’s budget is used to subsidize the fossil-fuel industry. The funds will be redirected to a climate charity if the XR’s demands are not met. Jane explained that despite their efforts to promote income tax resistance, only about 100 people are participating in the campaign. Their tax campaign has been partially hampered because only self-employed individuals can participate. Employees cannot control their tax withholding in the U.K. Thus far, income tax resisters have only received letters.

Biologist Alex Penson spoke last. He joined us from the Global Day of Action protest in the streets of the Glasgow, Scotland, where the COP26 U.N. Climate Conference was happening. He explained that the multi-pronged approach of Money Rebellion was intended to allow everyone a role in the campaign. If someone cannot resist their taxes, they can put pressure on banks such as J.P. Morgan. Actions have ranged from putting information stickers on ATMs to breaking bank windows. He also explained that the council tax is very similar to the property tax in the United States. Though Money Rebellion has recommended resisting 3% of the council tax, some have resisted the entire amount, facing repossession of their property and risking future imprisonment.

Longtime NWTRCC legal consultant Peter Goldberger joined us for our second session on Saturday. This session was a sequel of sorts to Peter’s discussion on the Hobby Lobby case at NWTRCC’s Earlham conference in 2014. Since the previous talk, there has been an “upsurge” of Supreme Court cases dealing with freedom of religion from a First Amendment perspective, which was different from Hobby Lobby’s focus on the Religious Freedom and Restoration Act. Especially in the last couple years with COVID-19 court cases, the Supreme Court “has been very actively reviving its application of this equal treatment, or at least equal to secular reasons, doctrine under the Free Exercise Clause [of the First Amendment]… If even handedly applied,” Peter believes this updated view of the Supreme Court could benefit war tax resisters.

The Sunday business meeting began with reports from both NWTRCC consultants (Coordinator & Outreach consultant), a biennial review of our consultants, the setting of our objectives for 2022, and the approval of our 2022 budget. (Minutes for this meeting our not available yet, but will be sent out to the network in the near future. The agenda and supporting documents for the meeting can be found here.)

There were two proposals on our agenda. The first was to make three amendments to NWTRCC’s statement of purpose, which had been updated at our May 2021 meeting. The decision was made to reject all three amendments and leave the statement as is.

The second proposal was for a sign-on statement, which will be part of an outreach campaign for the coming tax season. The statement and plan for this campaign were approved as is, though NWTRCC’s Outreach Committee was given leeway to amend the statement and campaign as needed. You will see more about this campaign in early January.

Overall, it was a wonderful conference and we were very pleased to even welcome an attendee from Switzerland, who has attended several international meetings on war tax resistance. It was also great to host such great speakers with several speakers joining us from abroad. It would be better meeting in person, but I am glad we were able to make the best of what technology has to offer.