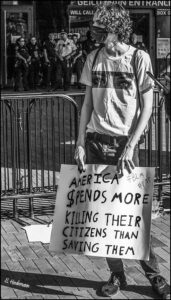 ax day is nearly here! I do find that a funny thing to say in June as I keep reminding myself that I should sit down and fill out the forms. My motto seems to be “put off until tomorrow what you can do today.” Still, as someone who files and refuses to pay, I can’t think of any reason to file before tax day, and I like to file on paper at the last minute as just another little way to gum up the system

But planning for redirection has been on my mind lately, reinforced by the calls to defund the police and invest in badly needed services in communities long underfunded. I’ve also gotten quite a few emails from organizations or activists encouraging donations to Black-led groups as another prod to consider my redirections.

This reminded me of NWTRCC’s 2017 call to war tax resisters for “collective redirection to Black, Brown, and Indigenous Resistance.” Sam Koplinka-Loehr, Outreach Consultant at the time, was behind the text for the call, which outlined reasons for this campaign (the full text and reports of the redirection are on the website). 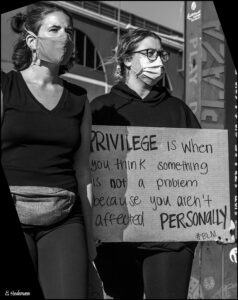 That last point said to me “put your money where your mouth is.” The collective redirection campaign did cause me to examine my usual redirection list and note that I was guilty guilty guilty of supporting mostly white-led organizations. While I focused on lots of good causes like feeding the hungry, sheltering victims of war, or promoting alternative media, I was not thinking about a deeper level of redirection that involves shifting resources.

This examination is an ongoing process. I’m not patting myself on my back for changes made as there’s always more to be done. Sam still deserves a nod for pushing us along the road to examine and act on the ways that racism and structural racism inveigle their ways into even our most sincere efforts to act for peace and justice.

3 thoughts on “Examining My Good Intentions”