From November 4 to 6, about 20 NWTRCC network members came together at the Sustainable Living Center (SLC) in North Florida to take stock of where war tax resisters are at, get to know our new field organizer Sam Koplinka-Loehr, learn about the militarization of the southern US, and enjoy some community time around a bonfire. We were joined during different sessions by Florida friends, most of whom were involved with the Florida Coalition for Peace and Justice. 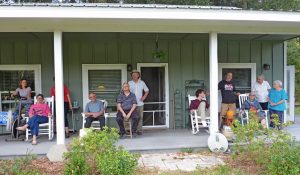 Our gathering weekend fell just before the election. That was a time when we could sit on John X and Martina Linnehan’s porch and relax…. And despite the trepidation with which we head toward a new administration, we can think about all the great work that people are doing to live in harmony with the earth. John X and Martina live on the Sustainable Living Center property in a house that was built with care for the earth, from the materials to the water catchment and sewage system.

Our host for the weekend, Garrett Llopiz, who is on the board of the SLC, has impressive plans for creating a sustainable food forest and developing a community to caretake and protect the land, along with making it available to peace and justice groups for their events and meetings.

The Friday night program and discussion started off with Cathy Deppe reporting on her trip to Berlin to represent NWTRCC at the World Congress on Military and Social Spending sponsored by the International Peace Bureau. She reported on this in a previous blog. And Erica Weiland and Coleman Smith reported back on the School of the Americas Watch (SOAW) Border Convergence (also a previous blog). NWTRCC helped fund our representatives at both these events, and we’re glad we did! Great connections were made in Berlin and at the Border. 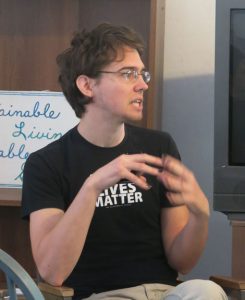 NWTRCC’s new Field Organizer/Outreach Consultant, Sam (left) started off Saturday morning by explaining through personal experience why the focus on intersectional organizing is so important now. Sam’s first protests against the Iraq war, seeing people of conscience imprisoned, and working on  environmental justice drew together many issues and led to questions about “What is effective action? What is power?” Being with so many longtime war tax resisters, Sam also noted that young people now are getting involved because of a specific war, like so many of us did, but are getting active because of issues of injustice around them. WTRs need to learn to speak to a new generation of activists.

NWTRCC is continuing to build toward tax season actions under the “Divest from War/Invest in People” theme. We have a new organizing packet online and will have versions in print by the new year. Part of the campaign will include promoting coordinated, but locally based, redirections of taxes to black-led organizing in our communities. Redirection decisions will be made by local groups, and NWTRCC will promote the effort through our publications, social media, and press releases before and at the end of the effort around tax day. Watch for more information on this in the next month. 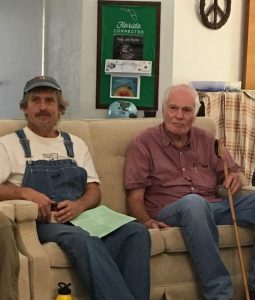 Daniel Woodham and Ed Geiger during the WTR gathering in Florida.

Our discussion about the election started off with concerns about how progressive activists feel attacked by friends and acquaintances if they were not on board with voting for the Democrats, but we gradually moved away from that concern and onto more post-election thoughts and strategies not matter who was elected. We’d probably have a rather different conversation today! Daniel Woodham asked toward the end of the discussion, “What do we want NWTRCC to look like at this time next year?” The notes ended with that unanswered question, so add  your thoughts to the comments on this page. 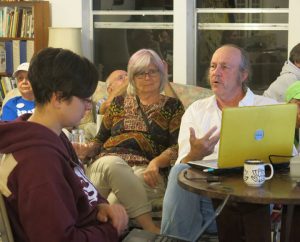 Clare (center), Coleman, and Erica (left) maintaining the virtual connection for people who could not come to Florida but wanted to participate.

Clare Hanrahan and Coleman Smith from Asheville, North Carolina, have put together an impressive slideshow and talk about on the Militarization of the South, which covers the bases spread through the south, military contractors, nuclear power and weapons, the military’s war on earth and environmental justice, and related horrors. The slideshow will be linked online soon.

In many ways it was a relaxing weekend. It would be good to hold onto that, but we find ourselves with much work to do and much discussion needed to figure out how the country got to this point — and how we can truly make it better.

— Post by Ruth Benn. Photos by Ruth and Ed Kale.

Click here for more photos from the weekend and links to other reports.

One thought on “Coming together to reach out: November 2016 NWTRCC gathering”