“Something there is that doesn’t love a wall” – is a favorite Robert Frost line I mused over on my first trip to Berlin for the International Peace Bureau (IPB) World Peace Conference.   Germany was readying for Unity Day October 3 – a national holiday celebrating the day “the wall” came down and the people of Germany were once again united.   I could hardly wait to take my first walk in this bustling, rebuilt city, east through the Tiergarten to the famous Brandenburg Gate that anchored the Berlin Wall for 27 years.   At first obscured from sight by an immense Ferris wheel set up for Unity Day festivities, the Gate soon came into spectacular view as a testament to peace.  Germany, knowing the consequences of war,  has admitted more of the world’s 65.3 million refugees than any other country. 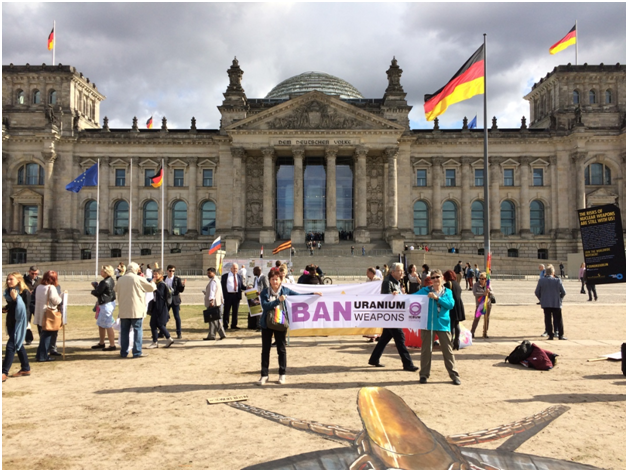 In another testament to peace, a disarmament action was in full swing in the Platz der Republik, outside the Reichstag.  The unveiling of artist Joe Hill’s astonishing interactive painting “#3DnukeBerlin“ introduced the IBP press conference.  My husband Alex and I were in Berlin to represent NWTRCC, the National War Tax Resistance Coordinating Committee based in New York.  Though I had not yet unpacked our banner, I was honored to help display another proclaiming “No Uranium Weapons.”  I was to learn much more about this in the coming days.

Civic society here and everywhere stands opposed to war and preparations for war, with people from every nation demanding the human right to live in peace.  And yet everywhere there are the principalities and powers, the governments that ignore the cries of their people, and through deception, propaganda, and fear, turn our world into a heavily armed and militarized weapon of destruction.  The 3-D painting at our feet in the plaza showed a huge missile emerging from the city sewers, yet being held back by chains clutched in human hands.  This is indeed citizen action confronting the war makers.

The urgent need to transform our militarized societies would be at the heart of the upcoming Peace Conference.   Refugees from wars, drought, famine, and instability now number over 60 million, an incredible mass movement of people not seen in Europe since WWII.   At the Technical University Berlin where we gathered, President Christian Thomsen announced the opening of 300 seats for the city’s refugees.  In his welcoming speech, he shared the history of this respected institution, first misused and militarized by the Third Reich, then pulverized by the Allies,   then reborn and transformed, with a mission to never again support war efforts.

Our coalition partner in Berlin was the Conscience and Peace Tax International (CPTI), a collection of war tax resisters and peace tax campaigners with a conscientious objection to paying for war.  CPTI has special consultative status at the United Nations, and promotes the aim that since the United Nations already recognizes that since human beings are free to reject military violence, therefore “no person shall be compelled to participate in military violence, directly or indirectly through military taxation.” * 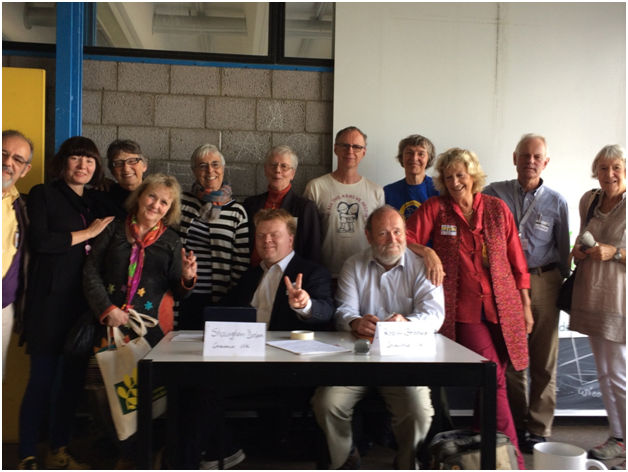 Most European governments do not provide an option to control withholding (W-4 resistance) but simply remove estimated taxes directly from employee paychecks.  Only self-employed persons can maintain control over their earnings.   A peace tax would require a government to create an avenue for conscientious objection by designating his individual income tax to be used for peaceful purposes only.    In the U.S., the National Campaign for a Peace Tax Fund is advocating for the Religious Freedom Peace Tax Fund Bill to allow “alternative service” for drafted dollars:  “It would be a watershed event for religious and civil liberties if major military powers acknowledged that citizens who object to military taxes have a just claim.”  Twelve countries have similar peace tax campaigns.  Our CPTI workshop attracted several newcomers and gave me an opportunity to describe our work in the U.S.   People were completely shocked at the high percentage of taxes that go to war and preparations for war in our land.   They especially liked the WRL pie chart and the NWTRCC brochure “Praying for Peace but Paying for War.   Our session ended fittingly with a comic skit topped off by a wonderful rendition of Bob Marley’s “Redemption Song” by Merikukka Kiviharju from PAND – Performers and Artists for Nuclear Disarmament.

We learned recently that while over 1,000 registered to attend the peace conference, over 250 who registered from countries like Ghana, Nigeria, Bangladesh and Pakistan could not get visas – one more wall faced by the global peace movement.   For those attending, there was a smorgasbord of plenaries, youth gatherings, 13 panel discussions and 63 workshops to choose from!   We found a great spot for the NWTRCC / Peace Tax Fund/CPTI table in a classroom hallway, and had great response from both conference participants and students from the institute.   Though we left with two roll-on bags of materials weighing at total of 43 lbs, we distributed most of it before returning.

Our newfound Belgium friends from CPTI invited us to their workshop “The Impact of War on the Environment”, which focused on the campaign against uranium weapons, in particular, the Salto Di Quirra firing range in Sardinia.   Located off the coast of Italy, this island is the largest NATO firing range in the world.  For 50 years, it has been used by military and arms manufacturers for testing new bullets, bombs and missiles, training soldiers, practicing war scenarios.  CPTI member Ria Verjauw, from Belgium’s movement, visited Sardinia in 2013.  She reported that the current state of environmental destruction includes lead in the water, contamination of local food products such as Sardinian honey, and the heavy metal thorium as found in the bones of several local shepherds who died from leukemia.  Cancer rates, particularly leukemia, are very high.  In the farmland, local sheep are often born with deformities.    Many fear electromagnetic radiation from numerous radar stations.  But local people are organizing to demand the evacuation and closing of all military bases, the rehabilitation of contaminated areas, and compensation for all victims.

I have personal concerns about uranium weapons.  My grandson’s father was in the Gulf Ground War of 1991. His unit bivouacked in the desert, near the remains of Iraqi tanks destroyed by depleted uranium “penetrators” and left abandoned to contaminate the environment.  To this day, children play on them and local people collect and burn them as scrap metal in the open air.  My grandson’s soon-to-be father came home from Iraq with an unexplainable rash and severe headaches, very possibly from the “Gulf War Syndrome”, still considered a “medically unexplained illness” not officially connected to radiation poisoning from uranium weapons.

After this workshop, I agreed to contact my California Senator Dianne Feinstein on behalf of the campaign.  Feinstein sits on the Defense Subcommittee.  It is important to question her for transparency and to ask if, when and where the U.S. has fired depleted uranium projectiles.   One of the biggest obstacles to world peace is again the wall of silence erected to hide the truth of the ongoing consequences of war on our planet.   The struggle continues.

** For information about the International Campaign Against Depleted Uranium, link to www.paxforpeace.nl.