I’m happy to report that our outreach at the SOAW border convergence at ambos Nogales (both Nogales, on the US and Mexico sides) went very well! NWTRCC network members, including myself, Anne Barron, Rachel Soltis, and Coleman Smith, were present at each activity throughout the weekend, including the vigil at the Eloy Detention Center (where undocumented immigrants are imprisoned awaiting deportation or release into the US), the march to the border on Saturday, the tabling and workshops, and the Sunday activities. 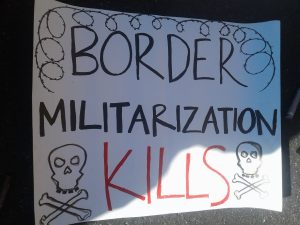 A sign made by friends from CISPES (Committee in Solidarity with the People of El Salvador).

At the border on Saturday morning I met Paula Kahn from CODEPINK who is promoting a People’s Tribunal on the Iraq War in December. She asked NWTRCC to be a part of this effort. I’ve proposed a potential endorsement and other participation, to be decided at the November CC meeting. (She also attended our workshop and was very enthusiastic about WTR!)

If you haven’t been to the US border before, you might be surprised to see how the wall isn’t always solid. Between the towns of Nogales, the border wall consists of very tall (30 feet) metal posts with a flat panel at the top. You can reach your arm through the border. I saw several small groups of people talking through the wall – one group even brought folding chairs to sit while they talked. 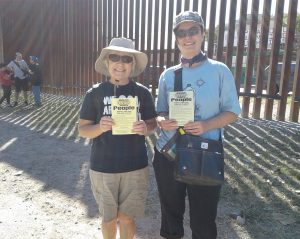 A steady stream of people passed by our table throughout Saturday. I spoke with many people curious about war tax resistance, as well as about half a dozen people who are already war tax resisters! Anne and Rachel also helped staff the table throughout the day. As usual, we passed out a lot of pie charts – including many of the Spanish-language ones. I was also very glad to have the translated Spanish-language flyer with our “Divest from war, invest in people” message

I attended a workshop given by a Tohono O’odham tribal member who is also a lawyer. She described the intense militarism and surveillance Tohono O’odham people endure on a daily basis, just for living close to the border. Mysterious deaths at the hands of the heavily armed Border Patrol, the use of surveillance towers that can see into people’s backyards and the desert around the community, and Border Patrol checkpoints on tribal land are part of regular life in this militarized zone. And the militarization is increasing, with aid from defense contractors around the world. The Border Patrol recently purchased surveillance towers for the border from Elbit, an Israeli defense firm that has deployed the same technology along the walls in Palestine/Israel. 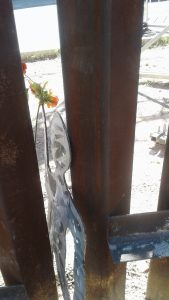 A black cardboard cutout of a person holding a flower slips between the bars of the border wall.

On Saturday evening, we were very excited to have about 20 people attend our workshop, “How to Refuse to Pay for War: War Tax Resistance 101,” which was held in the last time slot of the day, from 6:40 to 7:50 PM.We showed Death and Taxes, which spurred a lot of questions, and easily filled the rest of the time with Q&A. One Iraq Veterans Against the War (IVAW) member reported that he drove down from that day’s Tucson events just for our workshop! A woman shared that when she paid taxes during the Iraq war, it made her physically ill; she was thrilled to connect with resisters in person.

This is the best-attended WTR workshop I’ve been a part of, and it was especially exciting to be in a room with a wide range of ages and ethnic/religious backgrounds represented. We got many people’s contact information and will be following up! (And we all apologize for not getting a picture during the workshop.)

Early on Sunday morning, I got a ride to the border from a couple of activists who were inspired by our WTR friend Daniel Woodham to quit their jobs and spend the bulk of their time traveling and organizing! What a great way to start the morning. 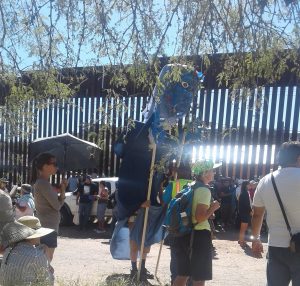 Coleman wears a large blue puppet in preparation for the beautiful Puppetistas street theater performance at the border on Sunday. Coleman was a key member of the Puppetistas.

Then I spent an hour or so handing Divest from War flyers to just about everyone who arrived at the cross-border event. I probably passed out about as many flyers in that hour as we did through the entire rest of the convergence! So I would recommend approaching people with flyers during the events, or standing near the gathering point to catch people as they arrive. During the morning and early afternoon, we heard speeches and music from people on both sides of the border, and participated in SOA Watch’s traditional No Más/No More and Presente rituals. The Puppetistas also performed a powerful street theater piece about border issues.

On Sunday afternoon, although I did not make it to this event, hundreds of people went to the Border Patrol checkpoint between Tucson and Nogales to protest the injustices perpetrated by them (this checkpoint is over 20 miles from the actual border). 20 people engaged in civil disobedience by entering the checkpoint and refusing to leave for over 5 hours. Read more about this action here.

I enjoyed attending this convergence, getting to meet such a passionate and engaged group of people and learning about border militarism and immigration issues. I hope this new energy stays with SOA Watch, and that NWTRCC continues to prioritize outreach at the annual convergences. I strongly believe that connecting militarism to other issues is the future of a revitalized movement against war.

Learn more about the weekend: Read the reportback from SOA Watch.