Most war tax resisters who refuse federal income taxes will eventually (or quickly) get a letter from the IRS. Here I describe some of the most common letters one tax-return-filing resister has gotten over the past few years. Resisters who do not file tax returns may get letters more slowly or not at all, until or unless the IRS system determines that a return has not been filed and issues the appropriate paperwork. (Do you want to write about IRS letters you’ve gotten as a non-filer? Write us a blog post! E-mail wartaxresister at nwtrcc dot org.) And you personally may receive all, some, or none of these letters. For more about the collection process and how it affects war tax resisters, see our Practical War Tax Resistance #3 pamphlet. 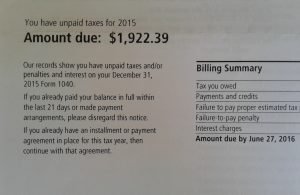 The first letter has always been a notice of unpaid taxes. IRS Topic 201, The Collection Process, explains,”The first notice you receive will be a letter that explains the balance due and demands payment in full. It will include the amount of the tax, plus any penalties and interest accrued on your unpaid balance from the date the tax was due.” This first letter, titled “You have unpaid taxes for [tax year],” is marked as Notice CP14 in the upper right-hand corner. Receiving this letter does not mean that collection is imminent – this is your first notice and you will likely receive at least one more notice before the IRS threatens collection. 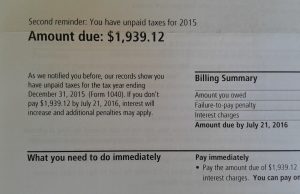 The second letter is very similar, just another notice of unpaid taxes, but with additional interest and penalties added since the last letter. This resister has received two different second letters in different tax years – one is marked Notice CP501, and the title below the address line is “You have unpaid taxes for [tax year],” while the other is marked Notice CP503, with a title of “Second reminder: You have unpaid taxes for [tax year].” In either case, it functions as a reminder that taxes are unpaid, and again, receiving this letter does not mean you are about be collected on. 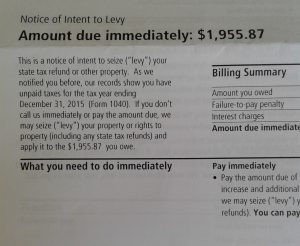 This resister has usually, a month or two later, received a third letter, called Notice of Intent to Levy, Notice CP504, sent by certified mail and requiring a signature to receive it. This letter is the final notice before the IRS may take enforcement action, such as levying bank accounts or garnishing wages. It does not mean that a levy will happen.

This resister has only sometimes received a fourth letter for any tax year. Other common types of communication they have received from the IRS are:

If you get a letter with a notice number from the IRS in the upper right hand corner, you can look up that specific letter on their website. (Note: letters from ACS Support don’t seem to be in their database.)

P.S. Although resisters may fear an audit, they are relatively rare, especially for resisters with uncomplicated returns.

P.P.S. Those who enjoy trying to understand the puzzle of IRS bureaucracy might also want to peruse David Gross’ posts on the communications (“nastygrams”) and levies he has received from the IRS over the years (all linked under the heading I., subheading G).